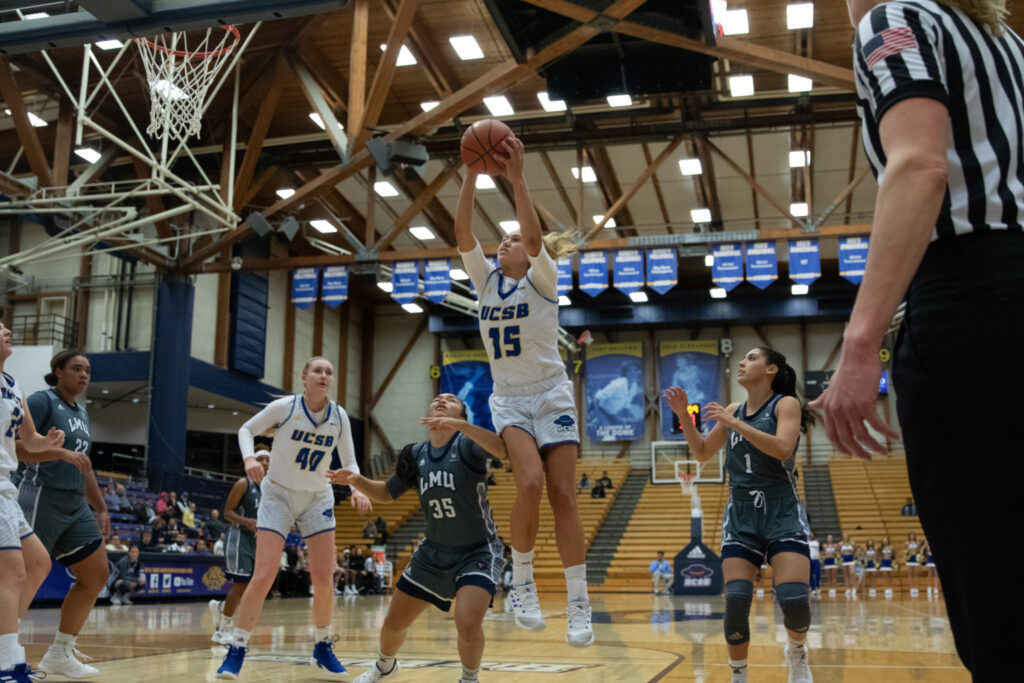 Despite a career high of 33 points from junior guard Coco Miller, the UCSB women’s basketball team fell to the Cal Poly Mustangs on Saturday, 75-67. With the loss, the Gauchos now drop to 3-12 on the season, and sit in last place in the Big West with an 0-2 record during conference play.

In many ways, Saturday’s game magnified the issues the Gauchos have had all season: slow starts, inefficient offense and lack of depth.

In front of a home crowd of 1,100 people, the Mustangs came out firing in the first quarter, desperate to pick up their first conference win of the season. In that quarter, Cal Poly outscored Santa Barbara 18-10, shooting 50 percent from the floor while holding the Gauchos to only 33 percent shooting. Perhaps most importantly, the Mustangs outrebounded UCSB by a margin of 9-4, with junior center Natalia Bruening having to sit for Santa Barbara after picking up two early fouls. Once again, the Gauchos found themselves having to play from behind the entire game, only holding the lead for 21 seconds in the entire game.

Outside of Miller’s career night, Santa Barbara’s offensive deficiencies once again hamstrung their ability to keep pace with the Mustangs. After scoring only 3 points in the first quarter, Miller went ballistic on the offensive end, scoring 30 points combined in the last three quarters while shooting 59 percent from the floor and 50 percent from deep. One of the biggest bright spots for the team this season, Miller displayed her elite shooting touch on Saturday.

Outside of Miller, however, the Gauchos shot merely 37 percent from the floor; in fact, the rest of the team made combined for only two three-pointers on the night. With Bruening logging only 14 minutes due to foul trouble, Santa Barbara lacked a presence in the paint — forcing them to take difficult shots all night.

Outside of Coco Miller and sophomore guards Danae Miller and Bri Anugwom — who both scored 12 points on the night — no Gaucho player scored more than 4 points on Saturday. Head Coach Bonnie Henrickson once again relied heavily on her starters, with the Santa Barbara bench contributing only 4 points.

On the flip side, Cal Poly found themself getting good looks all night. For a normally anemic offense, the Mustangs played one of their best offensive games of the season, shooting 50 percent from the floor. With seven players scoring more than 7 points each, the Gaucho defense struggled to contain the balanced Mustang approach.

On the night, Cal Poly was paced by senior guard Dye Stahley, who scored 16 points on 4-9 shooting. Freshman guard Maddie Willett also played one of her best games on the season, scoring 15 points while shooting 60 percent from the floor.

Still, the Gauchos should be commended for their effort despite what has been a trying season. Just as they did against CSUN two weeks ago, UCSB outscored Cal Poly in the fourth quarter in a valiant comeback attempt. Unfortunately, as has been the case for much of the season, they fell just a little bit short.

Looking to get back on track in conference play, the Gauchos will now turn their attention to Long Beach State. After struggling in non-conference play, the Beach picked up a commanding victory last Thursday, defeating UC Riverside 63-45. With only a 4-10 record on the season, however, LBSU should be a beatable opponent for a Santa Barbara team that desperately needs a morale-boosting victory.

After opening conference play with two road games, the Gauchos will return home for their game on Saturday against Long Beach State, with tip-off slated for 7 p.m.