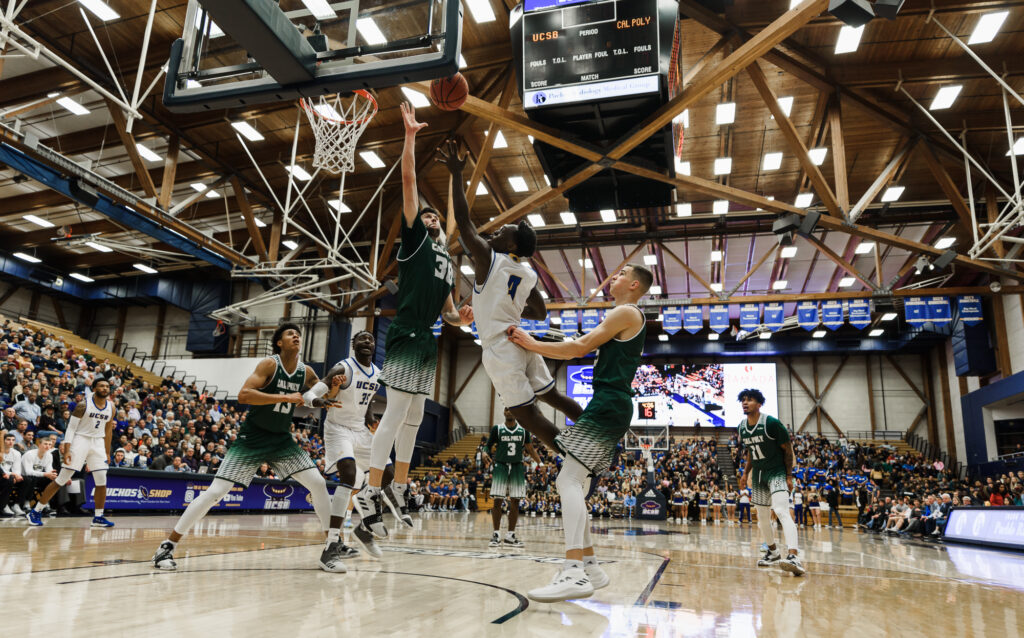 Devearl Ramsey drives to the basket and puts up a shot past a tall defender. Siavash Ghadiri / Daily Nexus

The UCSB men’s basketball team was triumphant in its Big West debut with an electrifying 65-56 win over the Cal Poly Mustangs.

The Gauchos remain at the top of the conference standings with a 1-0 conference, 12-3 overall record while Cal Poly is now in last place in the Big West with a 0-1 conference, 4-10 record.

After the big win, it’s safe to say that the Thunderdome is back.

From the new high definition video board to the masses of students in attendance, UCSB is steadily building up its best home-court advantage in almost a decade. The fans were jumping out of their seats and the energy in this Blue-Green rivalry seemed to even surpass the rivalry on the soccer field.

The Gauchos came out the gates with a burst of energy of their own.

They started off the game hot from the three, as Jaquori Mclaughlin knocked down his first two triples, and combined with an early Ar’mond Davis deep shot, UCSB jumped out to an early 11-5 lead.

However, after a very early timeout, the Mustangs showed that they weren’t going to go down easy. Donovan Fields put up two quick buckets to cut the lead to three and effectively stopped the Gauchos early run. The junior guard has commanded the offense all season for the Mustangs, averaging a team-leading 16.1 points to go along with 4.6 assists.

Although most defenders that the Gauchos threw at him had a significant height advantage, Fields was still able to get to the basket at will, and he ended the game with a team-high of 19 points.

The main theme of the first half for UCSB was fluidity.

Coach Pasternack made five subs in the first five minutes, which allowed the Gauchos to play an intense switch-heavy defense to start off the game. Combined with great off the ball movement on the offensive end, UCSB’s hockey-style substitutions meant that the rock was not in any one player’s hand for long.

Although they started off hot from the three-point range, the Gauchos also didn’t settle for long jumpers as the ball zipped around on offense, leading to easy buckets for the frontcourt. A layup by freshman Amadou Sow, followed by a thunderous Robinson Idehen dunk in the next possession, lit up the Thunderdome and gave UCSB a 24-14 lead with just under seven minutes to go.

Cal Poly did not back down, however, and a quick 11-2 run by the Mustangs cut the lead down to just one point with two minutes to go in the half. Cal Poly was not very efficient from three, but back to back deep jumpers by Donovan Fields and Kuba Niziol forced the Gauchos to call a time-out, and it seemed as if the two teams would be deadlocked going into the half.

Jaquori Mclaughlin had other plans, however. After a couple of quick buckets by freshman Sekou Toure, the Oregon State transfer knocked down his fourth three of the half to put UCSB up 35-27 going into halftime.

The two teams started the second half off by trading buckets.

Although the frenetic pace at the start of the game favored UCSB, the Mustangs were able to slow the game down in the second period. Freshman Daxton Carr knocked down a couple buckets to bring the score to 43-41 with 14 minutes to go, and for a second it seemed as if Cal Poly had finally worn down the switch-heavy Gaucho defense.

However, just as the Mustangs were poised to take the lead, UCSB kicked into another gear.

“I think it’s always about our defense,” Head Coach Joe Pasternack explained postgame. “Holding them to 37 percent from the field was the key to the game for us.”

The Gauchos stifled Cal Poly in the last 10 minutes, but another important factor was cleaning up the glass to finish off their solid defensive possessions. UCSB ended with a 45-35 advantage in rebounding, and their +16 second-chance point margin showed that they didn’t allow the Mustangs to get multiple possessions.

With nine minutes left to go, junior guard Max Heidegger knocked down his only bucket of the game to put the Gauchos up two, and they never looked back, as the lead never went under five again.

Four clutch free throws by transfer guard Devearl Ramsey helped seal the game down the stretch, and threes by Armond Davis and Jaquori Mclaughlin ballooned the lead to double digits as the clock wore down.

Ultimately this was a great win for the Gauchos to start off conference play. However, they know they have a long and arduous road ahead.

“Every game we play… we don’t have a margin of error,” Pasternack said. “Every conference game moving ahead is gonna be more [difficult], every time we play it’s not gonna be easy.”