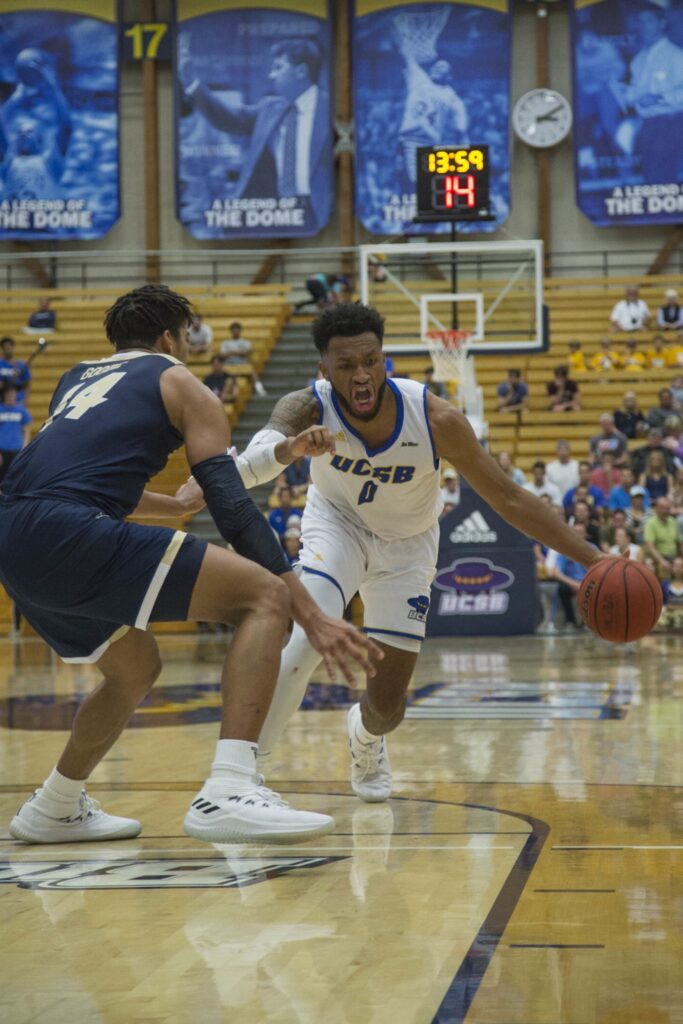 Big West Conference play for men’s basketball is set to begin this week, and what better way to start it off than with another exciting installment to the Blue-Green Rivalry.

Bragging rights aside, this matchup is not only one of the most important on the Gauchos’ entire schedule but it’ll also prove vital for the team to start off conference basketball on the right foot.

Entering this game, the Gauchos will be in fine form considering their current three-game win streak. Not to mention that the team will be fired up after their most recent record-breaking victory, as UCSB defeated Bethesda University by a score of 109-47; this 62-point margin was the largest in the school’s history.

On the season, UCSB currently holds an 11-3 overall record. The Gauchos have also maintained a perfect record at home after being undefeated through seven games; they’ll look to extend and apply their home court dominance over Cal Poly as well.

The Mustangs’ season hasn’t been nearly as favorable. The opposition holds a 4-9 overall record thus far; just above a .300 win percentage. They will be coming off a victory of their own, however, as they most recently defeated Holy Names University by a 68-47 final result. Prior to this, the Mustangs had experienced a four-game losing streak; one of which was an overtime heartbreaker at their own home.

The Mustangs have been the opposite of perfect when it comes to away games. Of the seven matches they’ve played on the road, Cal Poly has yet to win a single one of them.

Historically speaking, this will be the 114th time that these two teams have faced off against each other. In terms of all-time series, the Gauchos have the advantage as they lead the Mustangs by a record of 79-35. The last time that both these sides met was during the Big West Conference Tournament, where the quarterfinal confrontation was bested by UCSB with a final score of 75-53.

After last week’s dominant performance, the Gauchos have now scored over 1,000 points on the season.

Freshman forward Jay Nagle has also had a hot-hand lately. A key part in last game’s rout, Nagle finished with a game-leading 20 points. Just as important and only a score behind him was also freshman guard Sékou Touré, who protected the rim all night with 10 rebounds to go with his 18 points. Both players came off the bench in the last one, so it’ll be interesting to see what role the subs play in the upcoming conference matchup.

Most of the Gauchos’ game-plan will have to be centered around the Mustangs’ leading scorer senior point guard Donovan Fields. The offense seems to run through his hands as Fields’ 206 total points and 56 total assists are both team-leading, and his team-leading 22 steals also shows his ability to step up on the other end as well.

Senior guard Marcellus Garrick has also been on a tear for the Mustangs lately. Leading all scorers in their last game with 19 points, Garrick shot for 53% from field goal range, along with 50% from beyond the arc. A productive complement to Fields, it’ll be important for the Gauchos to not let either player get too open.

Head coach Joe Pasternak has provided an injury update for Gaucho junior guard Max Heidegger, labeling his status as a “mild strain of his quad”. However, he was practicing Tuesday night, before the game, so his chances of league play look optimistic.

With the conference play portion of the Big West set to begin, the all-games standings has UCSB sitting atop of the table at first place. Meanwhile, Cal Poly’s performance thus far places them in third-to-last place; this gulf in class is a clear indicator that this match should be in the Gauchos’ favor.

Tip-off is set for this Wednesday, January 9th, in the Thunderdome at 7 p.m. Come show your support for the Gauchos in this exciting Blue-Green Rivalry matchup!