The Daily Nexus
Sports
UCSB Returns to the Thunderdome to Take on Idaho State
December 22, 2018 at 12:16 pm by Richard Benites 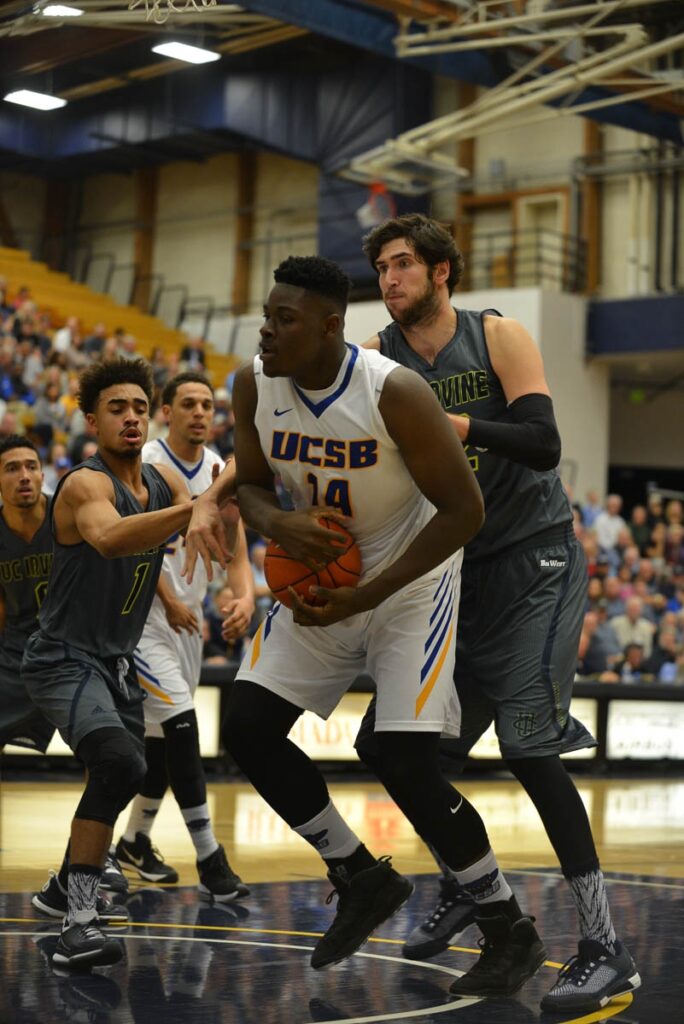 After grabbing a rebound, Ami Lakoju battles to keep hold of the ball. Cameryn Brock/Daily Nexus

The holidays are here and the UCSB men’s basketball team would want nothing more than to celebrate them with a win over the visiting Idaho State Bengals.

The clock is ticking on the lead-up to conference play; following this weekend’s game, only two more remain before the first Big West Conference confrontation between UCSB and rivals Cal Poly.

Until then, the Gauchos will look to get back on track from their recent road defeat against Nebraska-Omaha, which resulted in a final score of 74-85. With this loss, UCSB’s overall record on the year now stands at 8-3, and the team will be optimistic that their upcoming series of five consecutive home games will gift them a few more tallies in the win column; the Gauchos are currently undefeated when competing at the Thunderdome, with a 4-0 overall record when at home.

If the Gauchos successfully defend their home court, then that will be enough to bring the team back to  a .750 win percentage. In terms of how the team’s overall record fares in the Big West standings, the Gauchos are currently ranked second, three wins behind top of the table UC Irvine who have played three more games than them.

As for Idaho State, the Bengals’ overall record is a split 4-4, good enough to place them in the middle of the Big Sky Conference standings. Idaho State will also be looking to return to form as they too are coming off a most recent loss. On Wednesday, the Bengals fell short to Utah Valley University, which ended in a 77-88 defeat on the road.

This will be the sixth time that these programs have faced off against each other. The Gauchos just barely edge out the Bengals in regards to their all-time series record, with the blue and gold leading 3-2.

Players to watch for the Gauchos are graduate guard Ar’mond Davis and junior guard Max Heidegger.

Davis has been on an absolute tear as of late and leads the Gauchos in scoring with a total of 165 points to his name on the year, 36 points ahead of sophomore guard JaQuori McLaughlin who is in second place.

As for Heidegger, he’s slowly returning to form after recently playing in his first two games of the season during the road trip that  just concluded. For the mean time, head coach Joe Pasternack will keep rotating between Heidegger and sophomore guard Devearl Ramsey to take care of backcourt duties.

On the opposing end, Bengal junior guard Brandon Boyd leads his side in scoring for the season with 129 total points. Averaging 16.1 in points per game, Boyd also leads Idaho State in assists, with a total of 31 on the year. That being said, his turnover count is also team-leading and the Gauchos will want to game plan against such a knack for mistakes.

Fans will be excited for the Gauchos’ return to the Thunderdome and the commencement of their long stay. In turn, men’s basketball would like to start their home series on the right foot and give supporters something to celebrate during this most wonderful time of the year.

It’s a day game on the cards for the Gauchos, as men’s basketball is eager to host the visiting Idaho State Bengals. Tipoff is scheduled for 2 PM this Saturday, December 22, at the Thunderdome.