The Daily Nexus
Sports
New Lineups Ahead? Full-Strength Gauchos Key in on Final Non-Conf. Game Against Neb. Omaha
December 19, 2018 at 11:36 am by Max Kelton 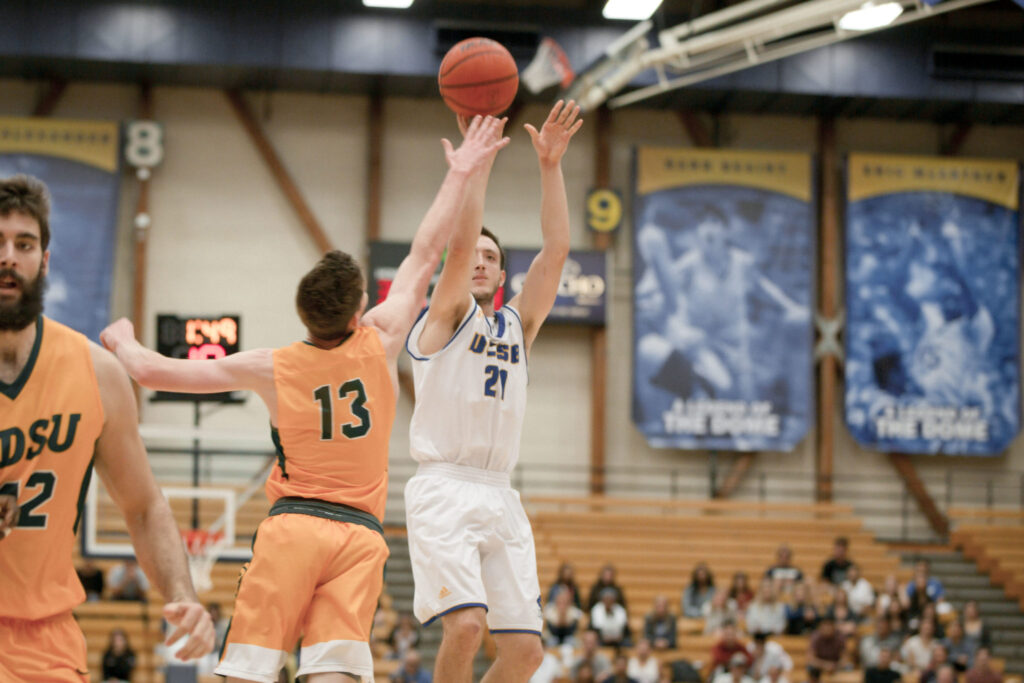 While the thought of Big West play lingers for the 8-2 UCSB men’s basketball team, the Gauchos will first head to the mid-west to face Nebraska Omaha for its final non-conference road game of the season. After the game, UCSB will return home for a nice five-game home stand which stretches into the start of Big West play.

On top of having just a 4-7 record to start the season, the Mavericks will have a tall task in front of them as UCSB’s star guard Max Heidegger has finally recovered from a concussion he sustained earlier this year. The junior made his return for the Gauchos last weekend in a 99-89 overtime win against Rice University after he missing the first nine games of the season.

Nebraska Omaha sports three players who average double-digits in the points column with senior guard Zach Jackson spearheading the attack, averaging 18.1 points per contest on a very efficient 50.8% shooting from the field. He also adds 3.2 boards per game.

Jackson erupted for a season-high 33 points against Montana State on back in late November, but just this past Saturday, Idaho held him to a season-low six points. It was the first time this year Jackson was held under double figures.

Junior guard JT Gibson is Jackson’s back court compliment who averages 13.9 points per game. In all but two games either Jackson or Gibson has led the team in scoring after each game.

Jaquori McLaughlin will likely get the assignment on Jackson as he gets the most difficult defensive matchup game-by-game and usually excels in shutting down the opposing teams’ top scorer.

Offensively, McLaughlin reaped the benefits of Heidegger’s return back to action as the sophomore accounted for 22 points in the win against Rice. Even more impressive, McLaughlin’s three-point shot finally came alive as he shot a season best 6-8 from beyond the arc.

As for Heidegger the guard’s return to the court was near flawless. Not only did Heidegger improve the Gauchos offensive production with his scoring ability but his mere presence on the court stretches the floor and creates opportunities both on the perimeter and in the paint.

Before Max’s return, team captain Devearl Ramsey was producing more with his ball distributing than his scoring ability, but with Heidegger on the floor, Ramsey was able to get more open looks from deep as he went 5-7 from the perimeter en route to a career-high 21 points.

Against Rice, Ramsey contributed eight of the first 10 points in OT to ultimately clinch the win for Santa Barbara.

The most enticing aspect of Heidegger’s return has to be the uncertainty about the starting roster. While this Gaucho team is deeper than any UCSB squad in recent memory, is Joe Pasternack gutsy enough to have Heidegger come off the bench?

Before Heidegger’s return, UCSB still held a very strong 7-2 overall record and were a few plays away from securing an upset win at Washington showing that this is a team that was able to produce throughout his absence.

Heidegger improves the Gauchos offense when in the game highlighted by their season high 99-point performance on Saturday, but as a result the defense can sometimes suffer due to the junior guard’s tendency to constantly push the tempo and speed up the pace of play.

The problem with playing at such a high pace is that it sometimes gives opponents the opportunity to match and put up more points. To that point, the Gauchos gave up a season high 89 points to the Owls.

However, it’s tough to make the case against starting forwards senior Jarriesse Blackmon and graduate Armond Davis. According to ESPN’s college basketball index, Blackmon has the fourth highest player efficiency rating (PER), a measure that assesses a player’s production based on the minutes they play, in the Big West at 19.76 while Davis’s 18.49 PER follows close behind ranking sixth.

Davis, Blackmon, and freshman forward Amadou Sow all post a top-15 PER in the Big West conference while Devearl Ramsey and Jaquori Mclaughlin are close behind. Funnily enough, freshman standout Sekou Toure has been the most efficient player in the Big West with a 33.57 PER which also ranks 10th in the country underlining how strong the Gauchos are all around.

All this is to say that Head Coach Joe Pasternack has a litany of options this season, something that was a bit of a struggle last year. Last season, Heidegger played nearly 33 minutes a game, most nights more, and it caught up to him at the end of the season.

This time around, Pasternack has a team that could go nearly 11-deep making them a major threat not just in the Big West but to any opponent. Heidegger’s talent obviously warrants him starting but now he no longer needs to play excessive minutes and some nights he could even come off the bench to give him a break.

For the first time this season, this Gaucho team is at full strength and it will be interesting to see what exactly that entails both at the start and off the bench.

UCSB will face Nebraska Omaha at 5 p.m. on Wednesday, December 19 at Baxter Arena.