The Daily Nexus
Sports
Ramsey Dazzles in Overtime as Gauchos Win in Heidegger’s Return
December 17, 2018 at 10:21 am by Max Kelton 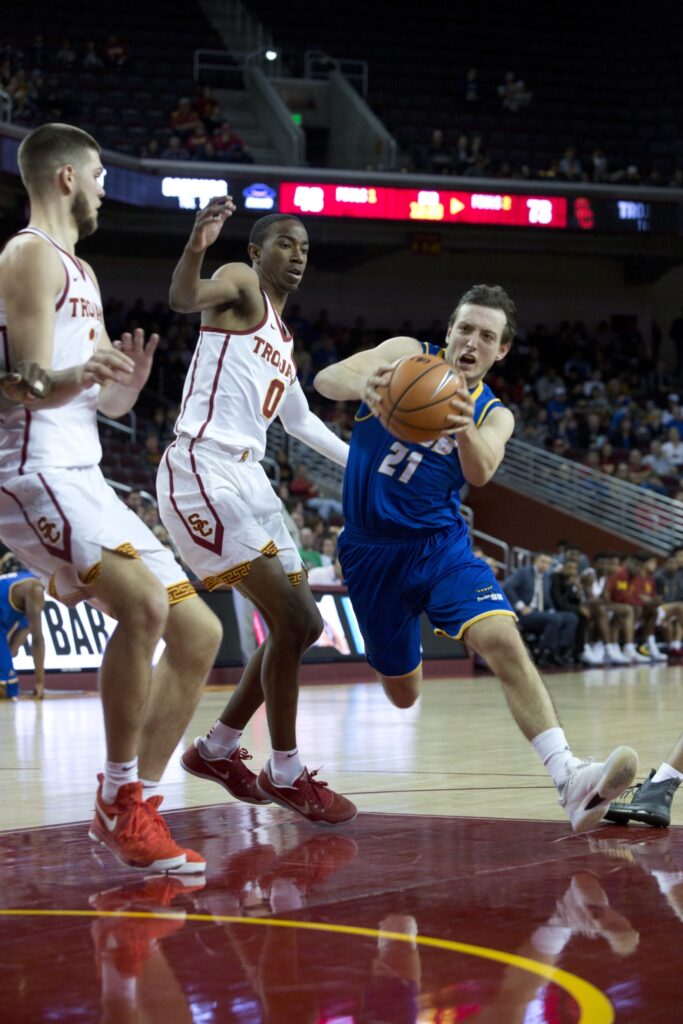 Max Heidegger made his long-anticipated season debut in Houston, Texas on Saturday as the UCSB men’s basketball team held off the Rice University Owls in a 99-89 overtime thriller.

Although questions arose about how the star guard would insert himself back into the Gauchos rotation, Heidegger’s return to the attack was as smooth as the Gauchos three-point stroke from deep. UCSB knocked down 48.6% of perimeter shots as they opened the game on a 12-0 run from four straight triples including two that came from sophomore Jaquori Mclaughlin.

Mclaughlin finished with 22 points while shooting 7-10 on field goals. He hit on a game-high 6-8 from three in addition to tallying four assists in the process. His starting backcourt counterpart sophomore Devearl Ramsey was magnificent leading the Gaucho’s attack in crunch time, as he added 8 points right off the bat in overtime en route to a career-high 21-point night with five three pointers.

“[Devearl] had 3 assists and one turnover. All I care about is don’t turn the ball over,” chimed Head Coach Joe Pasternack after the game. “We get him to go 5-7 from three… that’s a bonus, that’s huge. We needed every single one of them.”

Down 12 points within the first 2 minutes to open the game, the Owls clawed back and took command with a 31-7 stretch to put Rice up 31-19 with 4:21 to play in the first half. The scoring stretch was capped off by a three-point play by freshman guard Chris Mullins who added 21 points in 40 minutes for the Owls and while going 6-16 from the field.

Each team traded jumpers as the half ticked to a close with Rice up by 10 in the final second. With just a flash of time on the clock, Heidegger muscled the ball past the timeline and drew a shooting foul from three with just .1 seconds left. The Oaks Christian High School product sunk all three free-throws and moved the Gauchos within 7, down 39-32 at the break.

Heidegger immediately assumed a quarterback role in the attack whenever he came on the floor. In his return, the preseason first team All-Big West Conference honoree added 22 points in 29 minutes off of the bench while shooting 6-16 from the field.

The Gaucho’s offense lit up at the start of the half as they opened up on a 13-2 scoring run in which Devearl Ramsey and Heidegger collaborated for 11 of 13 out of the gate in the second half.

Just minutes after entering the half off the bench, Heidegger put an exclamation mark on the Gauchos opening push when he connected with consecutive threes as he launched the latter from over 35-feet out to put UCSB on top for the first time since the 11-minute mark in the first half.

Following a trio of free-throws from graduate guard Armond Davis with 13:16 on the clock, the momentum had officially shifted as the visiting Gaucho’s had now taken a 50-45 lead.

UCSB silenced the crowd with its suffocating defense on the ensuing possession which forced a telegraphed pass from freshman guard Trey Murphy III. Just in front of the midline, senior forward Jarriesse Blackmon jumped in front of Murphy’s feed and finished with a flush in transition on the other end.

While the Gauchos continued their offensive production spearheaded by the Mclaughlin-Heidegger attack in the second half, Chris Mullins and junior Robert Martin finished with 10 and 11 points respectively to set the scene for a last-ditch comeback in the final 4 minutes.

Following a quick release trey from Mclaughlin with 3:41 left on the clock, the Owls finished off regulation with a 9-2 run that sent the Saturday matinee matchup into overtime at 77-77.

Devearl Ramsey took matters into his own hands as the game made its way into extra time. Ramsey dazzled by adding 8 points in the first minute and a half as he splashed two from downtown along with a driving teardrop at the rack to put UCSB up 87-82.

The Gauchos carried their lead to the finish line as they went 10-10 from the stripe in overtime to close out the thriller. SB hit 23 of 24 free throws compared to the Owls who went 18-34 from the line.

“It doesn’t matter who you’re playing; the same things matter. Do you hit your free throws on the road? In Washington we didn’t. Here we went 23 of 24 from the free throw line,” said Coach Pasternack. “You can’t turn the ball over on the road and we had nine turnovers; one of our best performances of the year.”

Five Gauchos finished in double-digits with Heidegger, Mclaughlin, and Devearl Ramsey all ending the night with more than 20 points. Armond Davis joined in with 10 while freshman forward Amadou Sow went a perfect 6-6 from the field on his way to a 12-point night.

The ‘Chos away game at Rice was Santa Barbara’s penultimate non-conference road game as they head to Omaha, Nebraska to take on University of Nebraska Omaha at the Baxter Arena on Wednesday, December 19 at 7 p.m.