The Daily Nexus
Sports
Vom Steeg’s Strong Will Brings College Cup Back to a University Campus
December 7, 2018 at 1:40 am by Jorge Mercado 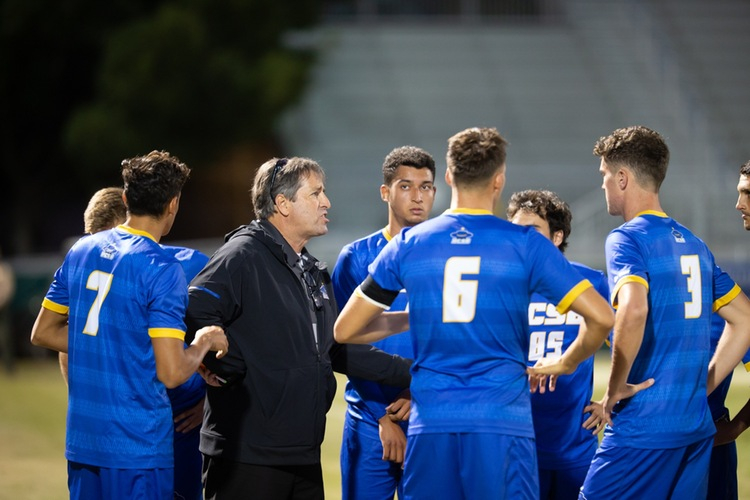 Back in 2010, four years after winning its first national championship, UC Santa Barbara had the privilege to host their first-ever NCAA College Cup. Despite some things not going as planned and some upgrades not being able to be finished in time, the event was a relative success.

“We were asked back in 2010 to host in kind of a last-minute situation, and we sort of scrambled to get it done, but even today people look back at that college cup and hold it as a high watermark over the last 10-plus years,” Head Coach Tim Vom Steeg said.

More than 9,600 people were packed in the stadium dubbed “Soccer Heaven” to witness Akron upset top-ranked Louisville 1-0. Now, as UCSB prepares to host the College Cup for the second time in school history, the university and its staff hope it can do an even better job.

“It’s a great honor and a unique opportunity [to be the hosts of the college cup],” Vom Steeg said. “I love being a host, and I love the cycle of having one year off to relax and then getting another opportunity to do even better in 2020, but our focus this weekend is to do a good job.”

Vom Steeg played a significant role in the College Cup making its way back to Santa Barbara. There were multiple reasons why vom Steeg felt he wanted the championship matches on his home turf.

The first reason is that this is just the 10th time since 1959 (when the College Cup began) that it will be held on the West Coast and just the third since the turn of the century. Hosting the matches on the West Coast is great because usually, that means better weather in the winter, especially in a place like Santa Barbara.

“It’s really, really hard to have people come out in Philadelphia in the second week of December to watch Stanford and Indiana,” Vom Steeg said. “Great teams, great programs, but when it’s 20 degrees outside it is hard.”

Even bigger than that, UCSB hopes to attract support for the College Cup being played at university campus stadiums instead of being held at big Major League Soccer (MLS) stadiums.

“I understand why the Soccer Committee likes the MLS stadiums. They are usually in big cities next to big airports and they are made to hold big games, but over the last four years I have been one of the more vocal critics in that our championship doesn’t reflect our game,” vom Steeg said.

Having participated in two College Cups himself, including UCSB’s historic 2006 championship, vom Steeg said he feels disappointed for coaches and athletes who work hard all year for a once-in-a-lifetime experience and the championship does not live up to the event.

To vom Steeg’s point, the average attendance the past three championship games has been just over 5,300, much lower than UCSB’s 9,600-plus showing in 2010.

Additionally, having such low attendance in big MLS stadiums makes for a much weaker atmosphere and feel to the game.

In a site like UCSB’s Harder Stadium that seats about 16,500, according to UCSB’s Assistant Athletics Director for Communications Bill Mahoney, having about 9,600 fans will look full and help build a strong atmosphere for players and fans alike.

But at a place like BBVA Compass Stadium, home of the Houston Dynamos and site of the 2016 College Cup Final, only 6,315 were in attendance. For a stadium seating 22,039, only about 29 percent of the stadium was full for a championship game.

If the game was at a place like Harder, the stadium would’ve been at about 40 percent capacity. Not great, but still a huge difference, especially considering that vom Steeg and co. hope to garner a bigger attraction this year.

“We are attempting to reverse the course of the last few years this weekend, and we are attempting to bring back the National Championship to a college campus and hopefully show everybody that this might be the better route,” vom Steeg said.

vom Steeg also said that even if the College Cup isn’t in Santa Barbara, as long as it is in a community that will support it and give the championship game the feel it deserves that would be a good thing.

This year, in order to prepare for a good showing, UCSB has had to improve Harder Stadium quite a bit. Even though the Gauchos were hosts in 2010 vom Steeg notes that the past eight years very well could have been 20.

“We literally had to start all over again. It takes a lot of work, but what we are hoping for this time around is being able to build off of this for the 2020 College Cup,” Vom Steeg said.

At the beginning of this process of hosting the College Cup, UCSB listed out 11 projects it wanted to get done, and vom Steeg said nine were able to be completed with the rest to be finished before the start of the next college season and certainly before the next College Cup.

“When people show up to the field they are going to see Harder Stadium in the best shape it has ever been in, and a lot of these changes are permanent that our fans will be able to enjoy for years to come,” Vom Steeg said.

One of the biggest improvements at Harder was the field,  investing $100,000 in it before the start of the season.

Other changes include bringing in international goal posts, putting new MLS type benches, expanding benches, increasing seating area in the “gold” zone by about 125, a new sound system at the stadium, new sewer lines for the bathrooms, beautifying the entryway, expanding the press box for media and finishing painting both the inside and outside of the stadium.

“The school really stepped up in helping improve the infrastructure of Harder, and it will go a long way,” Vom Steeg said.

For 2020, some of the changes vom Steeg said UCSB will hope to implement is a new ticket booth, more improvements to the entryway, and the addition of a new video board.

Overall, this weekend has a lot on the line for UCSB. Despite not being one of the final four teams, vom Steeg still sees both Friday and Sunday as huge opportunities to continue this course of action by having the College Cup at college campuses.

“I certainly hope we at least match what we did in 2010, and I hope we put on a great event,” Vom Steeg said. “This weekend will mean a lot but also is a project because if this weekend goes great we know we can make it even better in 2020.”

The championship match will be played at 5 p.m. on Sunday, Dec. 9 at Harder between the two winners on Friday.