The Daily Nexus
Sports
Spartans Sharpen Spears for First Final Four Appearance in 50 Years
December 7, 2018 at 2:24 am by Max Kelton 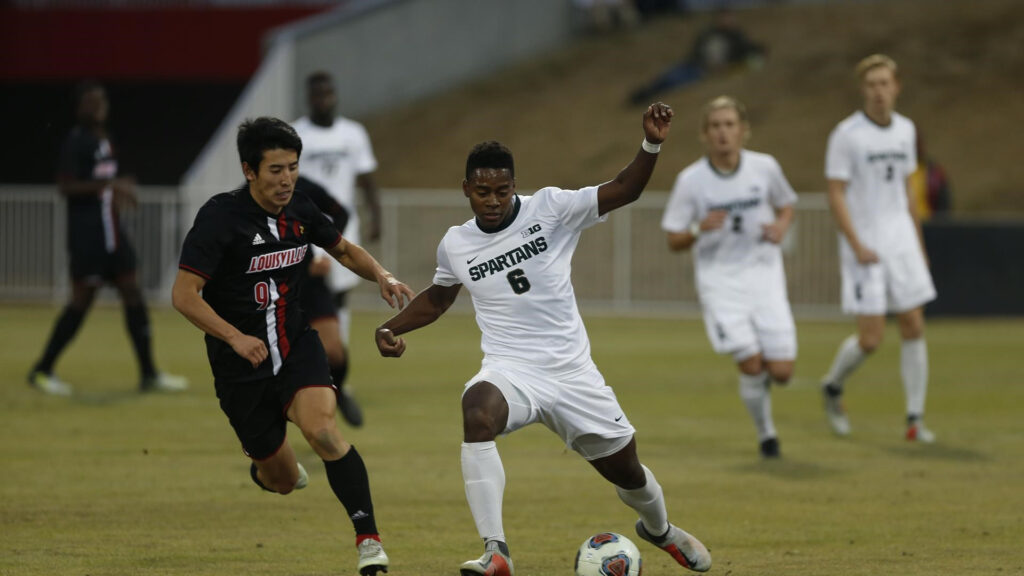 Half a century in the making, the Spartans have finally earned another trip back to the Final Four in the 2018 edition of the all-coveted College Cup Playoff.

Following a 14-4-4 season that landed Michigan State in the third spot of the Big Ten, the Cinderella Spartans hope to continue their fairytale performance in the NCAA playoff with just two games separating them and the title of the top collegiate soccer program in the nation.

Although Michigan State has been 8-3-3 back home in Sparta, it will be on the road for the College Cup in Santa Barbara. The Spartans have only one loss on the road this season, which came in Fort Wayne, Indiana as the Hoosiers knocked off the green and white in a 1-0 overtime thriller.

MSU has thrived since its last game against a Big Ten foe as the Spartans are winners of four straight matches heading into the Final Four this weekend. Following a first-round win against the University of Chicago, Illinois with a 2-0 victory, Michigan State found itself matched up against No. 4 Louisville in the second round.

The Spartans got out to an early lead in the 16th minute as freshman midfielder Jack Beck received a lead from senior forward Ryan Sierakowski on a breakaway hook to the bottom right-hand corner. Louisville was able to tie it up one goal apiece with a strike in the 77th minute that ultimately forced the game into overtime.

Just two minutes into extra time, junior midfielder Giuseppe Barone sent a free kick from the left side into the six. Louisville bobbled a crucial clearance as senior defenseman John Freitag netted a walk-off finish that propelled Michigan State to its second Sweet 16 appearance in as many seasons.

In game three of the playoffs, sophomore midfielder Michael Miller lasered a first-half strike from 35 yards out, which was all the Spartans needed to edge out the win against No. 13 Georgetown with a slim 1-0 shutout. Georgetown peppered off five shots in the final five-minute frame, but their comeback attack fell short as the Spartans advanced to their second consecutive Elite 8 appearance.

James Madison University struck early in its Quarter-Finals matchup with Michigan State as Dukes’ junior defensive midfielder Niclas Mohr snuck a dribbler past senior keeper Jimmy Hague for one of only two goals that Hague has allowed during the postseason tournament.

As the Spartans’ season was dwindling at point-blank range, Sierakowski took matters into his own hands as he lifted the ball just over a diving Dukes keeper to tie the game up at 1-1 with less than 20 minutes to play.

Under 10 minutes later, Sierakowski was back for vengeance again as the Spartans made a game-winning drive down the pitch. Senior defender Connor Corrigan lofted a long, arcing pass up to redshirt sophomore defender Patrick Nielsen who corralled the feed and found Sierakowski in the box for a split-second look.

Sierakowski made a snap decision as he read the keeper’s range from three yards out. With a hesitation move and a swift heel touch, the veteran striker finessed a curl around Dukes goalkeeper TJ Bush that capped off the 2-1 comeback and sent the Spartans to their first Final Four appearance in 50 years.

In his senior year, Sierakowski has been premier on the attack for the Spartans as the McHenry, Illi. native has delivered eight goals and five assists in 22 games this season while leading the Spartans past a mighty Big Ten Conference that boasted four teams that were selected to participate in the 2018 NCAA tournament.

The Big Ten commands the Final Four this season as Michigan State, University of Maryland and University of Indiana make up three of the remaining four teams still in the running to take home the College Cup.

The dangerous forward is complimented well by a playmaking Barone who ranks second in the conference in assists with 10 on the year. Barone is an elusive 5’9’’ attacking mid that powers the Spartan charge with 16 points tallied this year, which was good for second on the team.

As if the Sierakowski-Barone one-two punch wasn’t enough, senior forward and Michigan native DeJuan Jones has posted five goals along with five assists in 2018 to round out a deadly triangle rotation for MSU.

The trio of experience led Michigan State to the No. 2 in the Big Ten Conference in both total points with 112 and goals on the year with 35 goals in 22 games.

Holding it down on the defensive end for Sparta, Hague owns the No. 1 goalkeeping mark in the Big Ten with 79 saves this year, putting him on a track for nine shutout performances in the 22 games he started for the Spartans. His nine blanks this season are tied for No. 9 in the nation among Division I goalies.

With a stout Spartans backline that only allows .77 goals per contest, the best way to slow down Michigan State is to limit its sharp attack.

Yet with Ryan Sierakowski spearheading the attack and a fearsome duo in Barone and Jones at Sierakowski’s immediate disposal, this Spartan squad looks to ride its unforeseen tournament run to its first title in 50 years.

The Michigan State Spartans will take on University of Akron in the first game of the Final Four on Dec. 7 at 5 p.m. at Harder Stadium in Santa Barbara, Calif.