The Daily Nexus
Sports
As Showcase Comes Home, Gauchos Left Wondering What Could Have Been
December 7, 2018 at 2:38 am by Arthur Wilkie 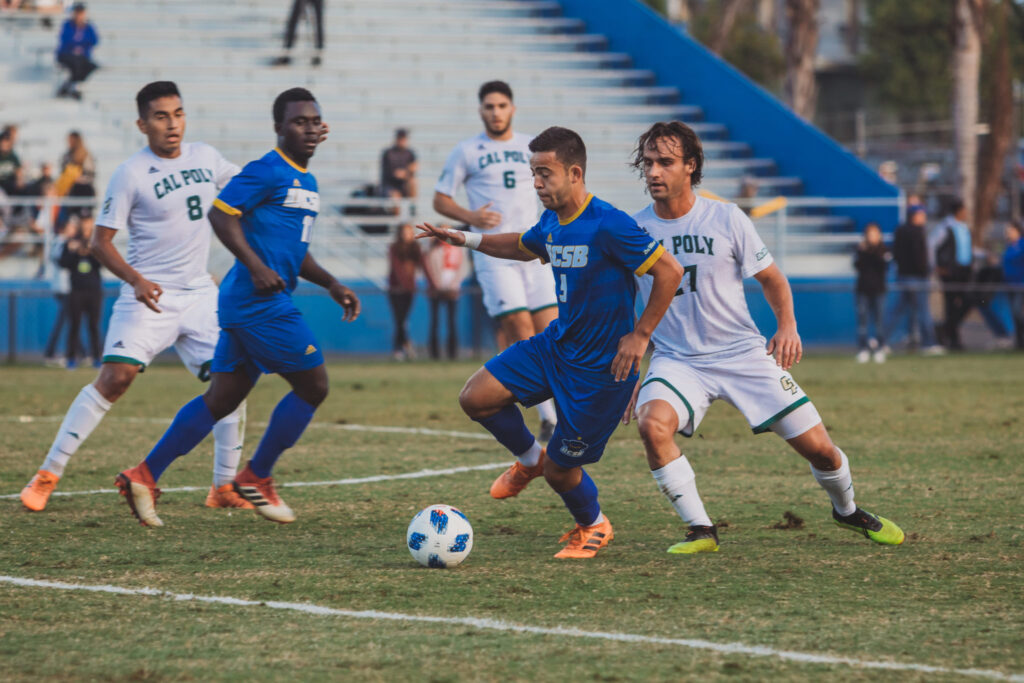 On Halloween night at an hour far past most young trick-or-treaters’ bedtimes, a dejected Tim Vom Steeg, in his twentieth year as head coach of the UCSB men’s soccer program, set down his keys on the table in the College Cup room situated under the east end of a now-empty Harder Stadium.

He faced the local media to discuss all that went wrong in their Big West Tournament quarterfinal versus Cal State Fullerton, which saw the visiting Titans advance to the semifinal after a penalty kick shootout.

These season-ending press conferences have become par for the course for Vom Steeg and the Gauchos over the past three years as they’ve fallen short of reaching the NCAA Tournament in either the quarterfinal or semifinal stages of the Big West Conference Tournament.

For a program that was once considered a perennial lock for the NCAA Tournament and a contender for the title, a postseason drought of this length is rare.

In the three years since UCSB’s last appearance in the NCAA Tournament when they fell to Clemson in the Round of 16, each season’s Gaucho team has seen their campaign end in disappointment come conference tournament time. This year’s Gauchos became the latest to join that group.

As unsuccessful as the Gauchos have been in recent times, there’s a recipe for success to make it back to the grand stage of the College Cup. It’s simple on the surface, but it wouldn’t be the crown jewel of college soccer if it didn’t require perfect execution by the four teams that make it that far.

“That’s been our issue all year. What’s been that ‘something different’ that can get us a goal?”

vom Steeg has the expertise and know-how to have the upper hand against any opponent, but as good a problem as it is to have so much talent at his disposal, it was also a nightmare to figure out what formation would get the most out of his team.

An argument can be made that UCSB played the best soccer of its season in any of the formations, but once the team got slightly exposed in one setup it was on to the next one.

This constant tinkering hampered players who excelled in certain roles in one formation and struggled in others, and there was no regularity for the team to grow into a formation as a unit.

One such example is senior defender and team captain Jan Ilskens. If he could be listed as a utility man, that would be a better descriptor since he’s been deployed as a center back, defensive midfielder, right back and even as a striker in the past two years.

After starting the season as a right back in the 4-2-3-1, he moved to right center back in the 3-5-2. With the wingback spots occupied in the 4-4-2 by juniors Ignacio Tellechea and Noah Billingsley, he began to get some playing time up top to support sophomore Rodney Michael in the forward lines. Playing out of position in attack didn’t suit him, so he moved back into the defensive midfield in the 4-3-3.

“If you follow Gaucho soccer, scoring goals this year has always been an issue for us. When we scored goals, it usually happened in bunches.”

The 2018 Gauchos certainly did score in bunches: Five times this year they managed to score multiple goals within a five-minute span. In the game against CSUN, it was vom Steeg’s tactical switch at halftime that worked to their favor as they scored a trio of goals in just seven minutes.

Yet it was hard to spread the goals around the team and even harder to score on the road.

The Gauchos had just five players with multiple goals on the season. Of those five, freshman forward Carter Clemmensen’s goals were both in the opening weekend of play, and sophomore forward Kaya Fabbretti didn’t join the ranks until the final game of the regular season.

UCSB’s road woes were well-documented this season, but one statistic still seems unbelievable until it’s checked against the team’s results: the Gauchos failed to score in each of their six road losses.

When the Gauchos scored, they got results. When they didn’t, they lost.

It should be no surprise that Michael had a goal and two assists in the road win at New Mexico and draw at UC Irvine. This year’s team relied heavily on the sophomore and oftentimes struggled to find a Plan B.

This was the result of an ever-shifting midfield and attack for the Gauchos.

The backline became solidified very early on in the season, but each game saw a rotating cast providing support for Michael and Billingsley, seemingly the only two regulars in the attacking half of the starting lineup.

UCSB played best when midfielders like junior Sahid Conteh and Fabbretti made deep runs and were able to contribute to the attack. When there’s so much talent and so many different styles of play vying for such few spots on the field, it can be difficult to implement one method of play over another. Injuries and suspensions didn’t help vom Steeg’s case either.

Figuring out the perfect combination in both areas will be the biggest challenge for the Gaucho coaching staff heading into next season.

Luck: What Every Champion Needs

“Soccer is a sport that if you don’t feel like you’re going to score, then you don’t let the other team score, and then you leave it to the penalty spot and see what happens.”

Part of the reason why UCSB hasn’t been able to make it back to the NCAA Tournament is simply down to luck.

In any tournament setting, especially one with as small a sample size as three games like in the Big West Tournament, a deflection or a shot that hits the post or crossbar can be the difference between winning and losing.

In this year’s quarterfinal against Fullerton, UCSB dominated possession in the second half of the game, but sophomore midfielder Carson Vom Steeg missed an open shot, and Michael failed to convert on an opportunity late in extra time.

Lady (Bad) Luck struck again in the penalty shootout when junior forward Ignacio Tellechea hit the crossbar, ironically after scoring his first goal of the season earlier in the match to get them that far.

Luck isn’t just a big factor in the conference tournament; the landscape in the Big West would have looked completely different if Michael hadn’t missed his penalty in the ninth minute at UC Irvine and the Gauchos didn’t have to come from behind to secure the 2-2 draw. If anything, it’s as important considering the college soccer season features so many games in such a small window.

With so many players being introduced into the fold, it may have been far-fetched to think that everything would come together in just one year.

Yet the hope remains. If Tim Vom Steeg gets all of this right and the Gauchos can get some luck on their side, the next trip to the College Cup might not be far off.

Arthur Wilkie is the Sports Director at KCSB-FM and served as the station’s lead play-by-play commentator on men’s soccer for the past two seasons.