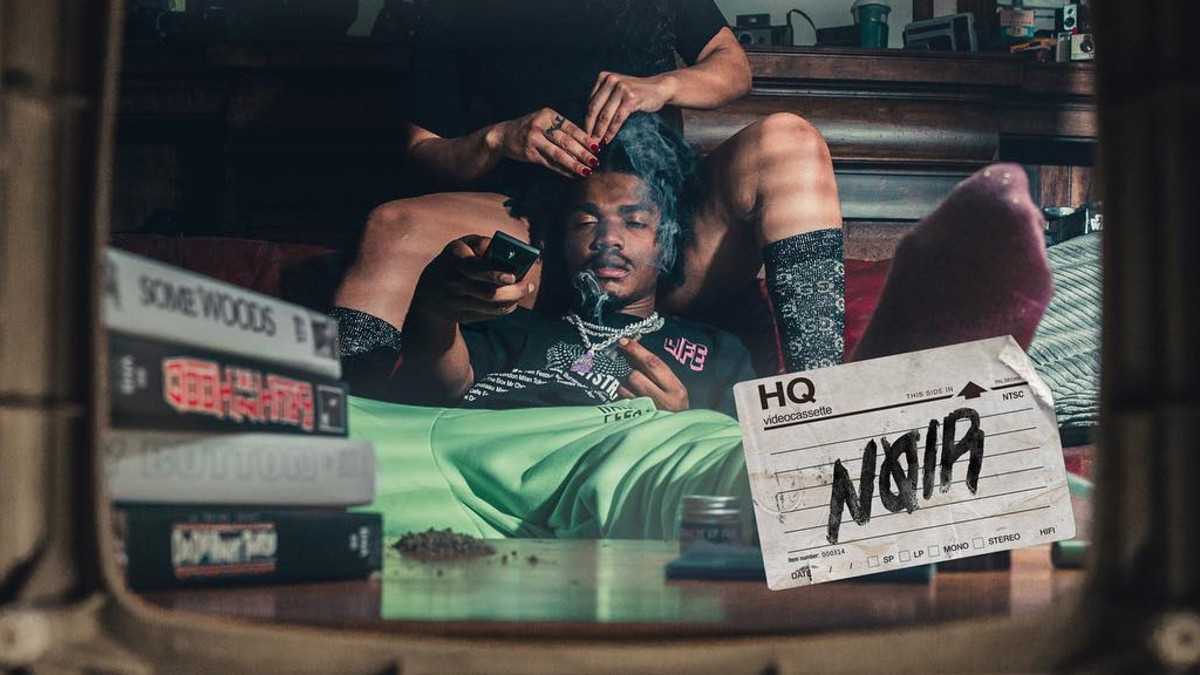 I’ve seen Smino live twice, once even in the Hub at UCSB last year. Both times he has been nothing short of extremely fun – jumping around stage with his quirky sound and dancing to his intensely upbeat music. Smino continues to exemplify his playful tone with his latest album NOIR and every time I listen to a song I reminisce about the memory of him bouncing around the stage and illuminating his audience through his perplexing voice.

The first time I listened to the album I was almost confused by its idiosyncratic collection of songs. However, the lack of cohesiveness of the album was surprisingly addictive. The distinct sounds of both the beat and the lyrics of each song were atypical, especially as one piece. However, they still flowed together and the stylistic choices created a natural movement between each song.

The St. Louis-born rapper collaborated with his usual producer, Monte Booker, on this project and created a masterpiece embodied by casual yet fun tunes. Smino successfully tackles a different niche of hip-hop by making it quirky yet smooth with his soft vocals combined with his raspy sounds. His very artistic approach to music distinguishes his music type from that of others in the genre.

While Monte Booker is the genius behind the beats, Smino further proves to be the perfect match with his bright vocals and impressive lyricism. Smino represents creativity in its essence. As you listen to the album’s songs one by one, each has a completely different sound but the amalgamation of all creates a triumphant piece of art.

Songs such as “KLINK” and “PIZANO” introduce high energy sounds while songs such as “MF GROOVE,” “SPINZ” and “MERLOT” slow it back down and make you want to listen on repeat for hours. What stuck out to me were the cuts “TEQUILA MOCKINGBIRD” and “KRUSHED ICE,” which offer sounds that are dissimilar from Smino’s earlier music. “TEQUILA MOCKINGBIRD” is a simple and fun approach to his story of a girl with high energy and bounce of the drums that alludes to an earlier Smino song, “Anita.” Despite his musical progression with this album, Smino includes songs reminiscent of his debut LP blkswn with the smooth funky tunes found in “KOVERT” and “MERLOT.”

Smino’s vocals in NOIR are something only a professional could achieve; the dexterity of notes he hits is truly exceptional. While he has this amazing voice, he doesn’t stop there, using adlibs, shrieks and strange words to make it even more dynamic and inventive. Smino’s individuality separates him from other hip-hop artists as he combines multiple genres and sounds to create a new space in the genre.

While he keeps a cool, not-so-serious vibe throughout the album, Smino still incorporates impressive lyricism through his bars. He changes his tone from feminine to masculine between songs, representing his ability to play on different emotions and create a variety of atmospheres. The versatility of his lyrics are also distinct, as he tells short stories of little importance yet cultivated and interesting rhythmic landscape.

The originality of this album distinguishes Smino from so many others. The eclectic sounds, also thanks to Monte Booker, makes a fun and detailed playlist. Smino enters a new field of hip-hop, the whole album playful to the point where you can imagine him having fun while making this music. As NOIR is only Smino’s second album, his stylistic development and pivot from his previous music differentiates him as more than a one-hit wonder. His new take on rap expressed through exceptional artistic qualities makes this album one to remember.

Although new Smino listeners may be unimpressed by the uncanny composition of different types of music, the stylistic choices Smino made represents the mastery of his understanding of hip-hop and the desire to express his own inventiveness while simply having fun.