The Daily Nexus
Sports
Huskies Outlast UCSB in Non-Conference Thriller
December 4, 2018 at 3:44 am by Max Kelton 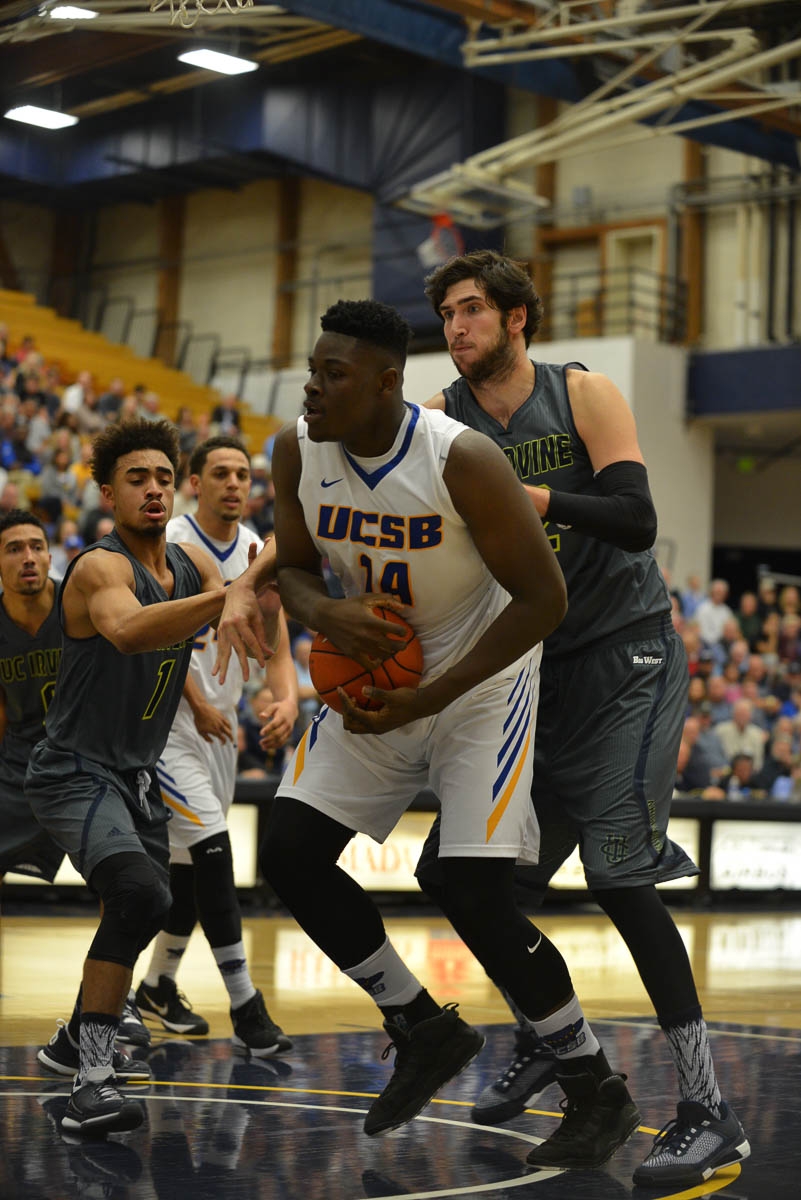 After grabbing a rebound, Ami Lakoju battles to keep hold of the ball. Cameryn Brock/Daily Nexus

In the game of the year, the UCSB men’s basketball team was held off by a stout Washington Huskies defense as the Gauchos dropped their second loss of the season in a 67-63 defeat that had fans on the edge of their seat until the final whistle blew.

Graduate guard Armond Davis led a hearty Gaucho comeback that fell just short as he added 20 points on 8-19 shooting including going 3-9 from downtown. Davis notched his first career double-double while adding 10 rebounds in the process as the UCSB final push came up just four points short.

The Gauchos will drop to 6-2 on the season with the loss, but held their heads high after a graceful loss to a tough Pac-12 foe. University of Washington will move to 6-2 as well this year following a choppy, yet effective, Huskies triumph.

Noah Dickerson posted 22 points while shooting 6-8 from the field. Dickerson, a senior forward, added 10-13 from the free-throw line plus eight rebounds to propel Washington to the win. Jaylen Nowell followed close behind with 17 points going 6-11 on field goals while adding five assists and four rebounds in the process.

The Huskies got off to a commanding start with a 10-0 run to open up the ball game. UCSB looked bewildered and outmatched within the first three minutes as Matisse Thybulle capped off the dominant start with a transition flush to take an early double-digit lead.

Thybulle was premier as a defensive stopper for the Huskies. The 6-foot-5 senior picked off six steals for Washington which paved the way for 18 points in transition for UW. Thybulle, a Washington native, added 13 points on 5-10 from the field including going 3-6 from the perimeter.

Armond Davis finally put the Gauchos on the board with a powerful drive in the lane as he drew contact and finished the take with a trip to the line for a 3-point-play. SB rode a 14-7 scoring run as Davis inched the Gauchos within striking distance with a transition lay in to make it 17-14 with 6:06 to play in the half.

Sophomore guard Jaylen Nowell answered back with a floater from the left inside hash-mark to extend the lead up to five points, but on the ensuing possession, sophomore guard Jaquori Mclaughlin found captain point guard Devearl Ramsey for a laser three-pointer that cut the Huskies’ lead to 19-17 with 4:30 left in the first half.

The Huskies found themselves up five at the break with a 26-21 lead over the underdog Gauchos as Noah Dickerson powered through the UCSB front court with 10 points on 4-5 shooting. Devearl Ramsey quarterbacked the Gaucho attack with eight points in the first half to go along with five points and six rebounds from Armond Davis.

Freshman standout Amadou Sow opened up the second half with a quick bucket to close out the Husky lead once again, but Washington abruptly went on an 8-2 run to open up a nine-point lead once again.

The Gauchos minimized the 34-25 deficit with a clutch three from freshman Jay Nagle, the second most efficient three-point shooter in the Big West Conference while shooting 50 percent from deep this year.

With 13:41 to play in the second half, Devearl Ramsey knocked down a sharp three to close out the deficit to 36-33. Nagle was not done yet as he followed up Ramsey’s three with a dagger three of his own to tie the game up at 36 points apiece.

Nagle tied his career-high mark with nine points while shooting 2-4 from three-point range as seven of his nine came in the second half. The freshman delivered a premier 29 minutes for UCSB off the bench including a stout defensive performance as well.

For the second time in five minutes, UCSB battled back with a 7-0 run capped off by a three-pointer from Jaquori Mclaughlin to tie it back up at 45-45.

Matisse Thybulle led the defensive core for UW throughout the game but fouled out at the four-minute mark shaping up a potential comeback for the Gauchos.

Without Thybulle on the court, UCSB looked controlled and confident in the final four-minute frame. Armond Davis drove the paint and finished to cut the lead to three. Amadou Sow quickly intercepted a pass from Hameir Wright and found a streaking Davis in transition for a fast break three to tie the game up at 57-57.

Davis single-handedly kept UCSB in the game during the second half as he added 15 points in the final 20 minutes on 6-11 from the field.

The Gauchos ultimately fell to Washington by a score of 67-63 following a cluster of fouls and free-throws to end the game as the Huskies held off a prideful UCSB squad.

Santa Barbara heads home for its next matchup against Arkansas Pine-Bluff on Dec. 8 at 7 p.m. at the Thunderdome.