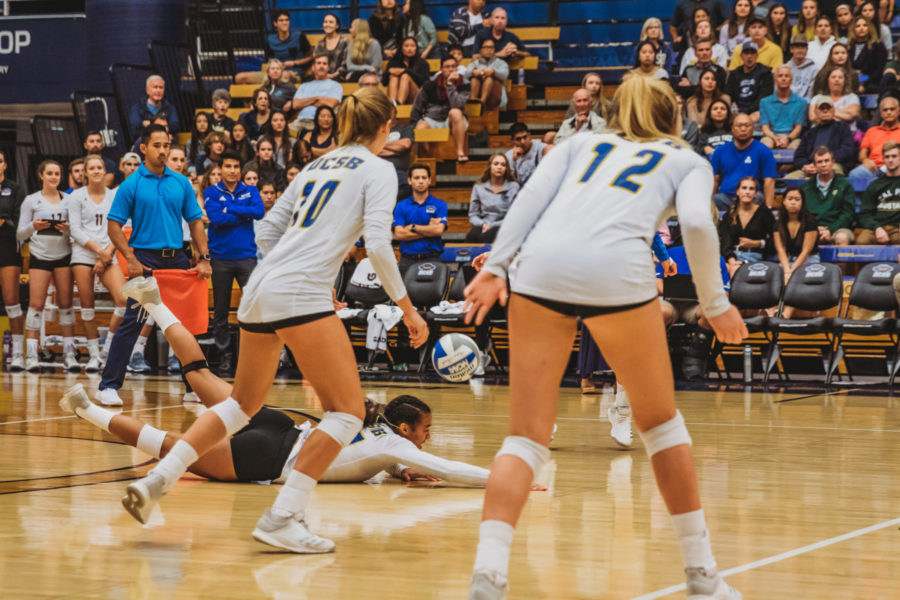 Three wins to close out the 2018-19 regular season helped propel the UCSB women’s volleyball team into securing its first postseason berth since 2013. On Sunday, the Gauchos were informed that they captured a spot in the National Invitational Volleyball Championship (NIVC),  a tournament that boasts of 32 competing teams.

“It was great to be invited; it just means all of our hard work had paid off. Now we are striving for more and continuing to get better as a program,” junior outside hitter Lindsey Ruddins said.

Santa Barbara clinched a tournament berth following a successful regular season that saw them finish with a 17-11 overall record and a 9-7 record in Big West play. UCSB’s 9-7 league record, which helped them earn a fourth-place finish, is also its best finish since 2013. In the first round, the Gauchos will face off against Fresno State, who comes into the tournament boasting a 21-10 overall mark and who also finished second in the Mountain West following a 13-5 league record.

If UCSB hopes to continue its season beyond its first-round match, which will be played on Thursday, then it will need to rely on its star outside hitter, Ruddins. The junior is one of the best players in the entire country let alone the conference. She averages 5.37 kills per set, which is the best mark of any Big West player, and also averaged 0.38 service aces per set, the third best mark in league play. Additionally, Ruddins was one of two Gauchos named First Team All-Big West.

“I am confident in my own skill set, and the rest of the team has been working just as hard,” Ruddins said. “I think we will be ready for this moment come Thursday.”

The other first team letter winner is senior defensive specialist Emilia Petrachi. Petrachi was the league’s best in digs per set, averaging 5.02. Another key contributor for UCSB this season was freshman setter Olivia Lovenberg, who did a great job of positioning teammates all year, leading to her Big West best mark of 11.19  assists per set. While big for UCSB, this match is also just as big for Fresno State, who will be seeking its first postseason win since 1995.

Coincidentally, the last time Fresno State was in the postseason was in 2002, when it also faced off against Santa Barbara. That match did not go so well for the Bulldogs, who lost 3-1. This time around, if Fresno State wants a win, then it will need to make sure to stop Ruddins. One player capable of doing that is sophomore Reagan Leonard, whose 570 digs this year is the second most in a season in program history. Her current 4.75 digs-per-set average is second best in the Mountain West.

On offense, senior Taylor Slover led the team and ranked third in her conference with 3.94 kills per set. History definitely favors the Gauchos in this matchup as they have won 25 of the 33 total meetings, but Thursday will be a different match.

If UCSB could knock off Fresno State on Thursday, then it will face off against the winner of UNLV/UC Irvine. Santa Barbara did not play UNLV this season but lost its two matches against conference foe UCI this year.

Overall, this season has been a success for UCSB. It has improved drastically from last season, when it only won eight games, and overall it has played great team volleyball. It is an accomplishment just being at the NIVC tournament, but the Gauchos will be hoping for more.

“It’s great that we have more volleyball, and we are all happy to be here in a position we have never been, but now we have to go out there and play well,” Ruddins said.

UCSB will take on Fresno State at 4:30 p.m. on Thursday, Nov. 29, at the Cox Pavilion Center. With a win, Santa Barbara will advance to the second round, during which it will play either UNLV or UCI at 7 p.m. on Friday, Nov. 30, at the same location.

A version of this story appeared on page 07 of the Nov. 29 print edition of the Daily Nexus.