The Daily Nexus
News
Co-Founder of Black Lives Matter Speaks at UCSB, Encourages Students To Get Involved Beyond Social Media
November 24, 2018 at 12:06 pm by Sean Crommelin

A crowd of 500 gathered in UC Santa Barbara’s Corwin Pavilion last Thursday to hear Patrisse Cullors, co-founder of the Black Lives Matter Movement, speak about racial justice and the history of the movement. 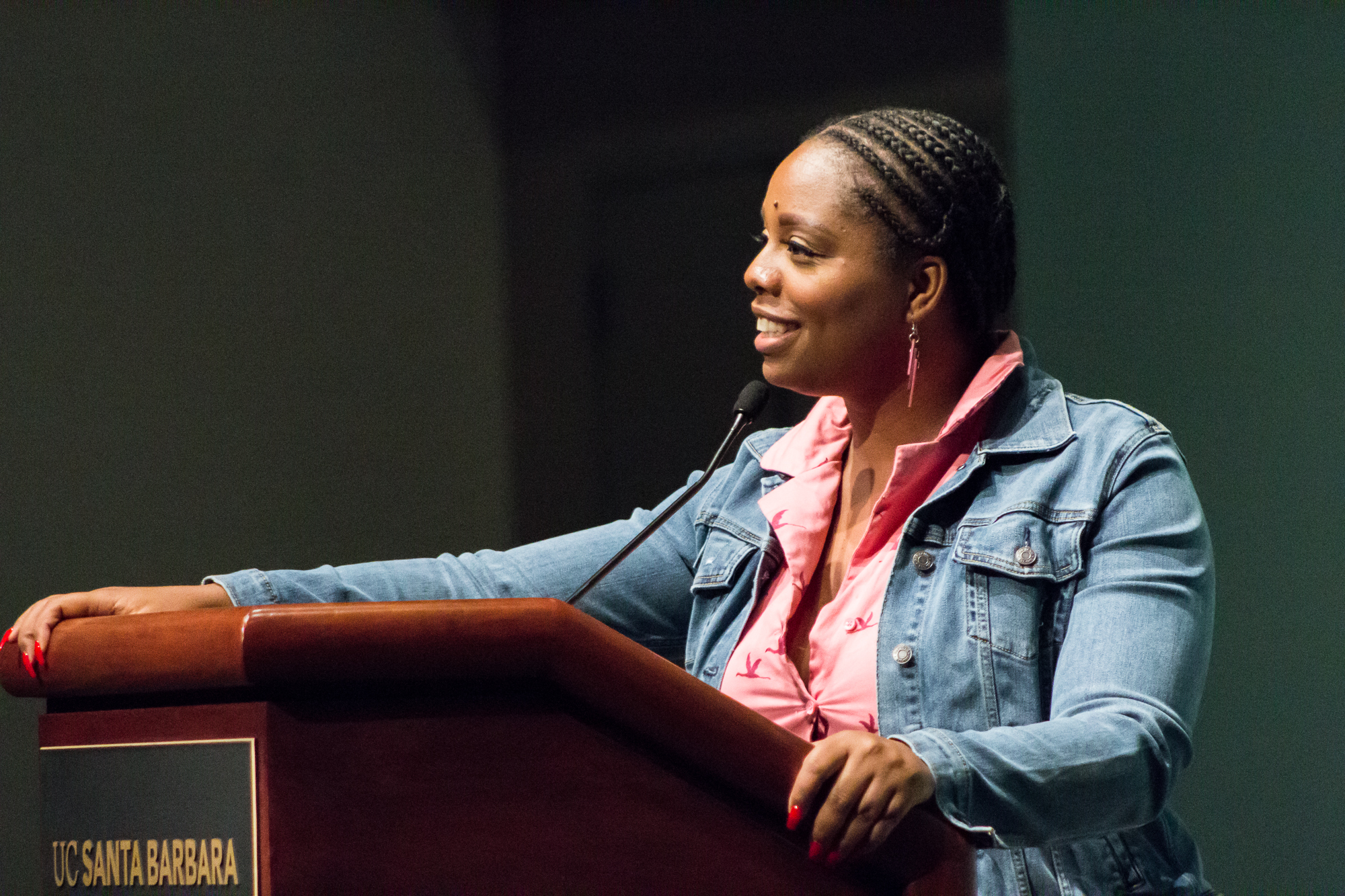 The event, put on by the UCSB MultiCultural Center (MCC), has been in the making for nearly nine months, according to MCC Director Zaveeni Khan-Marcus.

“[Cullors’] voice and the message she gives is so powerful. We felt that it was important for her to come to campus and talk about her experience,” Khan-Marcus said.

Cullors, an activist and artist, spoke prominently about the origins of the Black Lives Matter movement.

She discussed how the acquittal of Neighborhood Watch Coordinator George Zimmerman after his killing of 17-year-old Trayvon Martin caused outrage among those in the black community and beyond.

“It was a response, it was a guttural response to one of our tragedies of our generation,” Cullors said.

Cullors, a native of San Fernando Valley, also spoke about growing up in a community which resented the police and intimately felt the effects of mass incarceration. She highlighted the paradoxes in the American justice system, exemplified by Zimmerman’s not-guilty verdict.

“I sat with a contradiction of living in a country that has two million people in prison, one million of them black and George Zimmerman, a white-passing Latino, gets to kill a human being and go home free.”

Fellow activist Alicia Garza’s subsequent coinage of the term “Black Lives Matter” in a Facebook post, and Cullors’ decision to attach a hashtag to it in a post expressing her frustration, led to #BlackLivesMatter becoming a viral phenomenon – and later, a tangible social movement.

However, Cullors emphasized the continuity of the Black Lives Matter movement with regards to the past.

“This concept of Black Lives Matter has lineage. It’s a part of the Black Power Movement,” she said. “We stand on the shoulders of giants.”

Cullors emphasized the importance of becoming involved with issues beyond the confines of social media and fostering relationships with other organizations, such as the Women’s March and the #MeToo movement.

“Contrary to the media, a hashtag doesn’t start an actual movement. It takes skills, it takes organizing, it takes commitment and it takes sacrifice,” she said.

For those within the MCC, Cullors’ talk surpassed already-high expectations.

Khan-Marcus also admired Cullors’ ability to bring light to the issues by talking about her own personal experiences and how a sense of community and family gave Cullors a refuge from suffering.

“She talked about all the hardship she went through as a child, but there’s also a sense of love,” Khan-Marcus said. “I’m absolutely thrilled. Her presence itself was incredible.”

Just a request from a friendly reader: the use of the word native (“native to the Sam Fernando valley”) should be reserved in reference to indigenous peoples … not as a colloquialism

Native (adj.): belonging to a particular place by birth (e.g. a native Bostonian).

Quit trying to redefine and limit what words mean. By dint of my being born in the San Fernando Valley, I’m more native to the Valley than an American Indian born and raised in Oklahoma (even if his ancestors lived in the Valley). A Vietnamese person born in Georgia (next to Russia, not South Carolina) is a native Georgian whereas I am not, even though it’s my family’s country of origin. Learn what words mean, my friend.

You are so very right. God forbid!

Yeah this is pretty disappointing for ucsb

Exactly. First thing they do as the cops approach the door is claim racism

I Just spent 2 months on a work assignment in Chicago. Every single night on the news there were black on black shootings. Where was BLM?