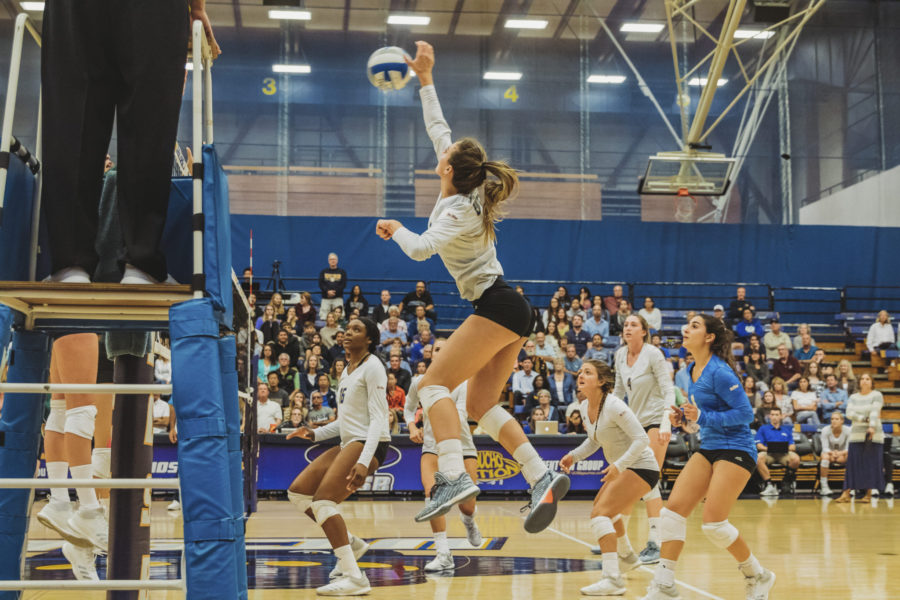 The UCSB women’s volleyball team ended its season on a three-game winning streak that included a pair of sweeps on back-to-back nights to clinch a winning 9-7 record along with a fourth-place finish in the Big West.

The first win of the back-to-back came on Friday night at home against Cal State Fullerton, and with the victory, UCSB swept the season series with the Titans. The next night the Gauchos celebrated senior night with a sweep of UC Riverside in the final game of the season.

In the victory against Cal State Fullerton,  UCSB succeeded due to its balanced attack lead by the Ruddins sisters, Lindsey and Gigi, who finished with team highs of 15 and 10 kills apiece.

Zoe Fleck and Emilia Petrachi both finished with double-digit kills on the night and Olivia Lovenberg lead both teams with 38 assists.

Each of the first two sets were never in doubt, as the Gauchos grabbed early leads in both and never relented as they won by scores of 25-18 and 25-16. The thirds set was the most competitive set of the night as a service error by Lindsey Ruddins brought the Titans to within two points at 18-20.

But the Gauchos proved to be too overwhelming for Fullerton as they went on one final run to close them out by a score of 25-20, taking the third set and sweeping the match.

On Saturday night the UCSB women’s volleyball team celebrated senior night along with the fans in attendance as the team’s three seniors, Emilia Petrachi, Annie Hasselmann, and Lexi Rottman were honored for their contributions to the program. The Gauchos fed off of the emotions and energy of the crowd as they swept UC Riverside to end their season on a high note.

Senior Emilia Petrachi added to her school record for career digs as she finished with 20 on the night, a mark that lead both squads.

Gigi Ruddins tallied 10 kills and Olivia Lovenberg put up her 9th double-double of the season with 42 assists and 11 digs. However, the story of the night was Lindsey Ruddins putting the team on her back and propelling the Gauchos to a victory in the final outing of her Junior year. Ruddins put up 22 kills and 17 digs, both marks being her best on the season in a 3-set match.

The first set in the victory over UCR was closely contested, as Riverside fought back from an early deficit to tie the set at 19-19, this was until a late run sealed the victory 25-22 in favor of the Gauchos.

The second set saw the Highlanders grab an early lead by as much as three points until the Gauchos found their stride and reclaimed the lead midway through and never looked back to clinch  2-0 lead with a 25-21 set win. The third and final set of the night was even closer than the first two, and it stayed competitive the whole way until UCSB held a 24-20 lead, just a point away from securing the win.

It was then that a pair of Gaucho errors and kills by Christina Escamilla of Riverside tied the set at 24-24 and the momentum had shifted. However as she has done all season long, Lindsey Ruddins took matters into her own hands as she got the final two kills necessary to clinch the sweep and win the final set 26-24.

The Gauchos will finish the season with an overall record of 17-11, and a conference record of 9-7,  that is unless they are selected to play in NIVC later this month.

This season’s end contrasts greatly to last season, where UCSB finished 8-20 overall, 9-7 in conference, and dropped both of their final two games of the season. With only three seniors on the way out and almost all of the main contributors returning for next year, these final three games should foreshadow a bright future for UCSB volleyball under coach Lantagne Welch.