The Daily Nexus
Opinion
Microaggressions Are a Macro Problem
November 15, 2018 at 10:11 am by Ally McCulloch

A small smirk, too small to even see a glimpse of a tooth, a quick shuffle, and my feet are flying toward the door.

A good way to deal with your problems? Probably not, but this has been my mechanism for dealing with misogynistic comments and actions: a stare held a few seconds too long, a demeaning catcall (have they EVER worked?). The anger that builds inside of me screams to tell them to shove it. But honestly, it’s easier this way. It’s a confusing time to be growing into womanhood, and we must treat ourselves with care in navigating this difficult path given the current headache that is U.S. politics.

In itself, becoming a woman is difficult. We are taught from a young age that our bodies are objects. We look at models on TV and in magazines and wonder why we look different. We inevitably think that our looks equate to our worth and value in society. 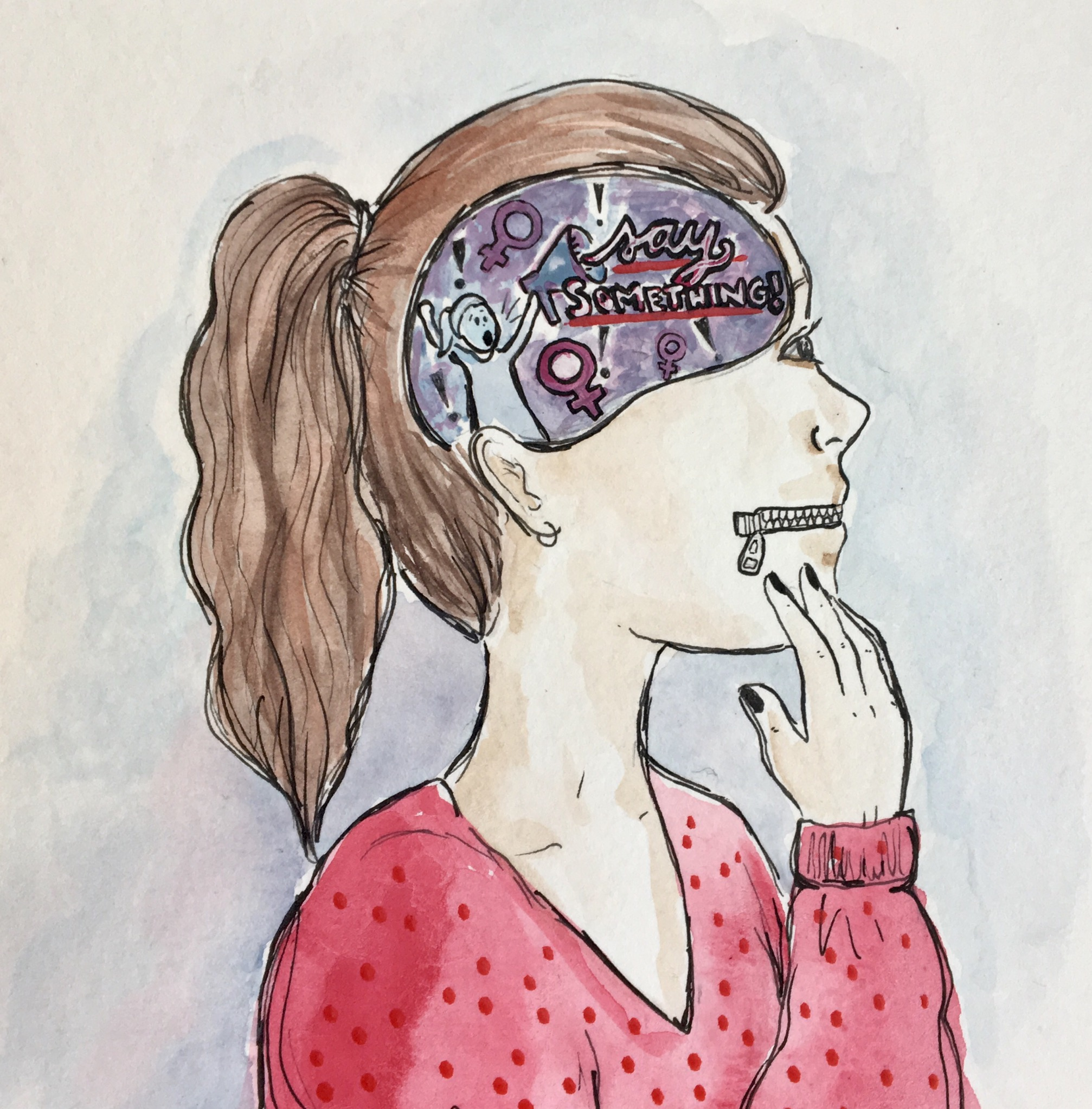 Becoming a woman in college is another story. College is freeing and confusing and a place of finding who we are. With male-dominated majors, we constantly have to prove that we belong, even though we deserve to be here just as much as our male peers. With the carefree desire to dress however we please, we still have to hear what men have to say about it when we’re walking down Del Playa.

It makes me feel like a hypocrite to let a man tell me what to do, but the energy it takes to explain why his actions are wrong is mind-boggling.

Last week after a long day at school, I went to the grocery store to get some food for dinner. At checkout I was minding my own business, lost in thought about all the other assignments I had to get done that week. When it was my turn to pay, the 40-ish, balding cashier seemed nice at first. He asked me how I was, but then proceeded to tell me that I should smile more because I “look much prettier that way.”

At first, two responses came to mind: One, fuck you; two, you should put on some deodorant to cover that smell — but we can’t all have nice things.

Telling a woman that she’s prettier when she smiles implies that she should always be happy, polite and put-together, catering to the needs of men like this one. Men may mean this as a playful compliment, when in reality it’s a power play. My other option is to flash a small smile and make my way to the comfort of my own home. The latter is all too tempting.

Maybe if we spoke up every time a man said or did something that was misogynistic, women would gain the respect we inherently deserve.

We see women like Dr. Christine Blasey Ford displaying her deepest emotions to the world, and what does she get in return? She is called a liar, and we are asked to consider the impact her accusation has on Brett Kavanaugh, as if he had not completely altered the course of her life years ago, all the while being swiftly appointed to the Supreme Court. It is discouraging at best. When these microaggressions stem from a source of power, dealing with them is all the more difficult. Dr. Ford withheld a traumatic life-altering experience for years and told her story not when she wanted to but when she had to.

Some might say that women are being too sensitive, that these “microaggressions” are imaginary. In reality, this is just another microaggression in itself.

When we have Kavanaugh on the Supreme Court and a president who says he grabs women “by the pussy,” my hope is withered. I fight this feeling day in and day out, trying to remind myself that it is worth it. Real change takes time. I have to remember that women’s suffrage was not an easy road. Women fought for decades to get us to where we are today.

It’s a constant battle between fighting for equality and staying sane. It’s not just one microaggression here and there. It is constant, which is why we pick and choose when to make our voices heard. When we do explode with anger, it is because our threshold of tolerance has been shattered to pieces. My suggestion is to take it day by day; treat yourself with caution. If you don’t have the patience it takes to explain such a simple concept, it is perfectly okay. Trust yourself, and walk away.

However, if you feel up to the challenge, take it head on. Try to attack the problem, not the person. Attacking the person’s character, however tempting, will only take away from the point and validity of your argument. Assess the situation. If someone is catcalling you while you are walking alone at night, it might not be the best time for confrontation. Battling this should never compromise your safety. More often than not catcallers are cowards. They yell at strangers on the street because they do not have the courage to approach them and have an actual conversation. But, given the chance that they are aggressive, it is best to confront them only when surrounded by others. Remember that when you resist these things, you have millions of women standing behind you. Take some deep breaths.

Some might say that women are being too sensitive, that these “microaggressions” are imaginary. In reality, this is just another microaggression in itself. Dismissing a woman because she is “too sensitive” is plain hurtful. Listen to us, and maybe you’ll begin to understand the strength it takes to keep moving despite this staggering feeling of powerlessness. As author and feminist Roxane Gay so perfectly states, “It’s hard not to feel humorless, as a woman and a feminist, to recognize misogyny in so many forms, some great and some small, and know you’re not imagining things. It’s hard to be told to lighten up because if you lighten up any more, you’re going to float the fuck away.”

Whether it be a smile or a full-on fight, however you choose to deal with microaggressions is perfectly normal.

Ally McCulloch hopes that women feel comfortable speaking out against misogyny in their daily lives.

Ally McCulloch
Ally McCulloch is an Opinion staff writer. In her free time you can find her running to Sands and being allergic to everything.
23 Comments
Inline Feedbacks
View all comments

YASSS. This is perfect, so glad someone said it. Lets end female suffrage forever.

Perfect?? It was pathetic.

Couldn’t have said it better myself! You go Ally!

You are not the measure of what is well said.

I’ve dated women like you and it’s a challenge almost every day because there are a lot of things like you said that are wrong, I discovered simple language was wrong a huge majority of the time and even terms like ‘to bitch about something’ but everyone has challenges, maybe try to appreciate that people may mis-speak but they aren’t always ill intentioned. And there is a lot of teaching and educating but try not to be sad the whole time you correct everyone or you’ll end up being sad all the time.

It must be a miserable life expecting the world to bend to you.

Grow up! Life is full of tough times, being a functional adult means you learn to deal with it and continue on. Not whine, “oh, life is so unfair” YES IT IS! Get over it.

I would imagine that the “40-ish, balding cashier” isn’t up to date on this week’s PC / Non PC ways to talk and act since he’s obviously not very well off if he’s bagging groceries at age 40 “ish”. I doubt he has the time (or extra income) to spend hours each day scouring the Internet for the new proper things to say or not say. Wait, Did she just “poverty shame” this guy or was that last weeks PC thing to not do? So, What’s up with poverty shaming this poor older man that has a teenagers summer job… Read more »

I feel sorry for you, educated as you are to perceive every little thing — what you admit it as MICROaggression — as cause for anger. Grow up. You can start by having a more objective assessment of Ford’s testimony, rather than assume that because she is a woman, she is telling the truth regarding the alleged assault. Get the chip off your shoulder. You live in a country that gives women more freedom than any ever has in the long history of the world. A filed dominated by men, my ass. Have you not noticed that the humanities have… Read more »

“No one can make you feel inferior without your consent.”

In short, words only have the power you yourself grant them. Think like a victim and forever a victim you will be.

I must say that I truly appreciate the opportunity to read articles like these. Being aware of the environmental conditions that lead college students to think that are constantly victims of microagressions, as well as all of the other political and social contagions that constitute the “flavor-of-the-day” issues that make people think they are transgender, transracial, or suffering from whatever other grievance comes to mind – well it’s just enlightening. I appreciate knowing which colleges and universities suffer from this tripe – it let’s me track which ones I won’t be sending my children to when the time comes for… Read more »

“It’s a constant battle between fighting for equality and staying sane.” You’ve lost the “staying sane” side of the battle. I am sick of horrid entitled princesses of your ilk. Ally, you project not a proud femininity, only mental feebleness, moral confusion, and an extraordinarily petty, Grinch-like inner ugliness. Your pretentions and your claims to talk in MY name are repulsive. You are simply a contemptible human being who represents nobody and nothing but her own demons. Hopefully your unlucky acquaintances see you for the public danger you are, and keep apart from you. PS Oh, and by the way,… Read more »

How dare you. You probably encourage womens suffrage. Misogynist.

this is why you shouldn’t take feminists seriously. get over yourselves

As a psychology graduate, you are narcissistic to think that women are victims as a whole in society. This article has very few facts, and is mostly emotion-based click-baiting false propaganda. Why are men more likely to be victims of homicide, falsely accused of rape, and make up the majority of our prisons? I’ll wait, Ally. “While liberals were in a contest to see who could be the first to call out fat-shaming, the Tea Party has been busy taking over school boards.” -Bill Maher, a true liberal. Leftist Islam apologizing pc sjw’s like yourself take the bait about every… Read more »