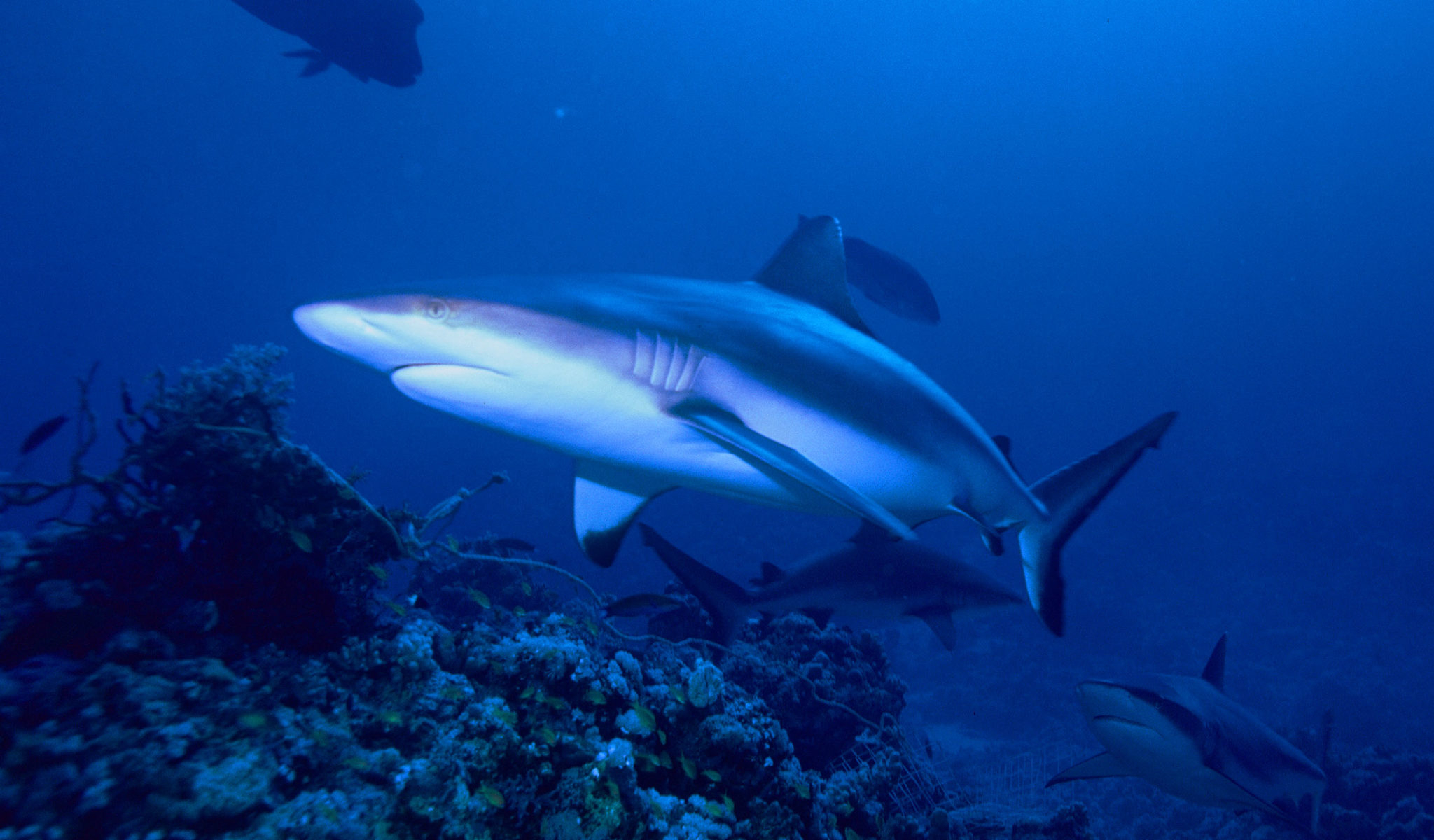 Gray reef sharks are generally found in shallower waters near coral reefs, a declining habitat that makes them more susceptible to overfishing. Additionally, their low reproductive rate and the fact that they end up as bycatch in many fisheries have contributed to their “Near Threatened” conservation status as determined by the International Union for Conservation of Nature. / Courtesy of Wikimedia Commons

UCSB researchers set out to understand shark movement in the Republic of the Marshall Islands (RMI), an island nation in the central Pacific Ocean consisting of hundreds of small atolls and islands. Instead, they discovered a high level of illegal shark fishing activity within the shark sanctuary.

The researchers studied gray reef sharks, which are typically found near coral reefs. They tagged the sharks to track their locations via satellite, but soon realized the tags were moving in an unexpected way.

“It turns out we didn’t really have the luxury of getting to explore our initial question … [we realized] our satellite tags weren’t doing very sharky things. They weren’t occasionally coming to the surface, they weren’t sticking close to the reef,” Darcy Bradley, a postdoctoral researcher at UC Santa Barbara’s Marine Science Institute and Bren School of Environmental Science & Management, said.

Rather, the scientists noticed that the sharks’ movement was suspiciously linear, traveling nearly straight west across the Pacific Ocean. Some tags ended up as far as Guam and the Philippines.

“Very quickly it became clear that the tags were not on sharks. They were actually on boats,” Bradley said.

This concerned the researchers, as they estimated that if the captured sharks were presumably killed, this rate of fishing mortality would cause even a healthy population to collapse in fewer than five years to less than 10 percent of its un-fished state.

In response to high levels of illegal shark fishing activity, the RMI became one of the first countries to create sweeping legislation that protected sharks outright. The country declared its entire Exclusive Economic Zone (EEZ) — nearly two million square kilometers of ocean space — to be a shark sanctuary.

In their study “Leveraging satellite technology to create true shark sanctuaries,” published in the journal Conservation Letters, Bradley and her team outline how shark sanctuaries could enhance surveillance and enforcement.

“Across the board, these areas ban the commercial fishing of sharks. So there’s no actual shark fishery that can operate within that area. They also might ban the take of sharks at all,” Bradley said.

Sharks are a high-value target species, making them susceptible to overfishing.

“Almost every part of a shark can be sold in a market — the liver has a fairly high value, the skin has a high value, the meat is something that’s sold,” Bradley said. “And then, really, the highest value part of the shark is its fins.”

While the international shark fin trade has slowed down largely due to successful conservation efforts in the last decade, it is still an internationally active trade. Fins can fetch up to several hundred U.S. dollars per kilogram.

And because of the vast size of the RMI EEZ, monitoring all ongoing activity can be difficult. Illegal shark fishing activity, such as that the researchers observed, can often slip by.

Within the RMI exists one of the most active tuna fisheries in the world. Sharks end up as common bycatch, or an incidental catch, as part of commercial tuna fishing. Fishers are expected to comply with legislation by releasing their bycatch of sharks and having their fishing hauls checked at the RMI ports.

“We are assigning no value to that shark that’s landed [in the RMI],” Bradley said. “It’s just trying to make the economic value of sharks be forced to zero because they are so economically valuable.”

According to Bradley, several loopholes in shark sanctuary legislation may prevent full protection of sharks. Certain countries aren’t required to land their catch in RMI ports. Artisanal fishers can catch sharks, allowing possible trade on a local scale to eventually sell up to commercial boats. 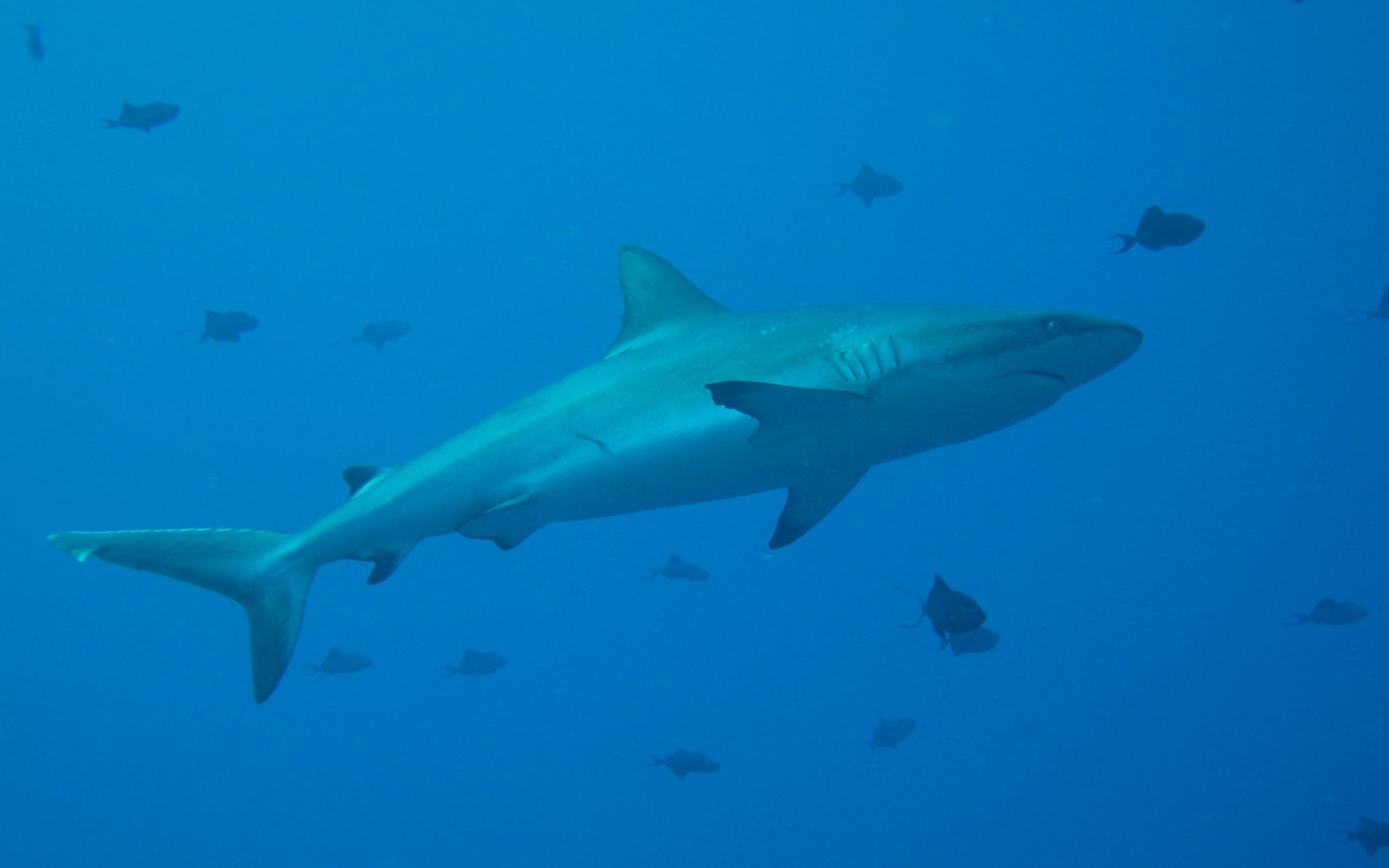 The researchers’ recommendations to enhance the enforcement and monitoring within shark sanctuaries via satellite technologies include implementing vessel tracking systems, bannning vessels previously linked to illegal shark fishing from shark sanctuaries and working with international organizations and academia. / Courtesy of Wikimedia Commons

In their paper, the researchers propose how the RMI can capitalize on several opportunities using existing vessel tracking technologies to strengthen their shark protection policy. One suggestion is for the fishery management organizations to build upon global treaties and international agreements, such as the Port State Measures Agreement (PSMA). The PSMA aims to eliminate illegal fishing globally by prohibiting vessels previously linked to illegal fishing in shark sanctuaries from landing their catches and docking at ports. Banning these vessels could strengthen international repercussions for failing to comply with shark sanctuary legislation, according to Bradley.

“If a vessel was illegally fishing for sharks in a shark sanctuary, [we propose] it wouldn’t just be given a fine from the Marshall Islands. That vessel would actually end up being listed internationally as a vessel that is engaged in illegal fishing, and that can be really problematic for that vessel in all other countries that are cosigned onto things like the PSMA,” she said.

The study also recommends enforcement of a more robust vessel tracking system. Many vessels in the ocean carry a satellite tracking system called Automatic Identification System (AIS) that originated as a maritime safety device to avoid collisions on the high seas. More recently, it has become a tool to help researchers understand the landscape of fishing in global oceans.

Launched by Google, Global Fishing Watch uses a machine learning approach to look at vessel tracking information. The program can detect not only where a vessel is but also what it’s doing. This makes it an “incredibly valuable tool,” Bradley said, as it will allow researchers like herself to be able to tease apart which vessels are fishing vessels and when fishing vessels are actively fishing as opposed to simply transiting between locations.

“We are proposing that certain fishery nations can look to opportunities to expand that tracking data — not just on the largest vessels but on all vessels operating within the sanctuary. Then they can really have a complete picture of what all the fishing vessels are doing in their sanctuary, where they are, when they’re fishing, when they’re not fishing and from that they can start to flag suspicious activities,” Bradley said. “That bolsters our ability to know what’s happening in the ocean, to have eyes on these really remote ocean faces.”

She continued, “We really applaud countries like the RMI that are prioritizing shark conservation, and we just wanted to point out in our paper that there are some really interesting opportunities using satellite technology to improve the enforcement of that legislation. We really are in an interesting time historically where there’s so much technological innovation that we can use it to think creatively about how to close some of the loopholes and really leverage that type of innovation to help bolster enforcement and monitoring within shark sanctuaries.”