The Daily Nexus
Opinion
I Am Not America’s Spokesperson
November 15, 2018 at 12:11 am by Hannah Jackson

The entire class, filled with British, Canadian, French, Australian, Korean and Swedish students, turns to stare as I, the sole American in the room, am asked on the spot to share my opinion on the state of my country.

“Do you think that the United States is a hegemony or an empire?” the student presenter asks me. I pause for a minute to ponder her question and feel the eyes of my international classmates boring holes through me.

“I suppose it has elements of both,” I tell her. She rolls her eyes at me. “You can’t be both,” she says, exasperated. The TA quickly intervenes, changing the subject.

For the rest of class I fumed silently in my seat. Why ask me about my opinion and experience as an American if it will just be shot down? Does my personal experience only carry weight if it confirms the asker’s argument? 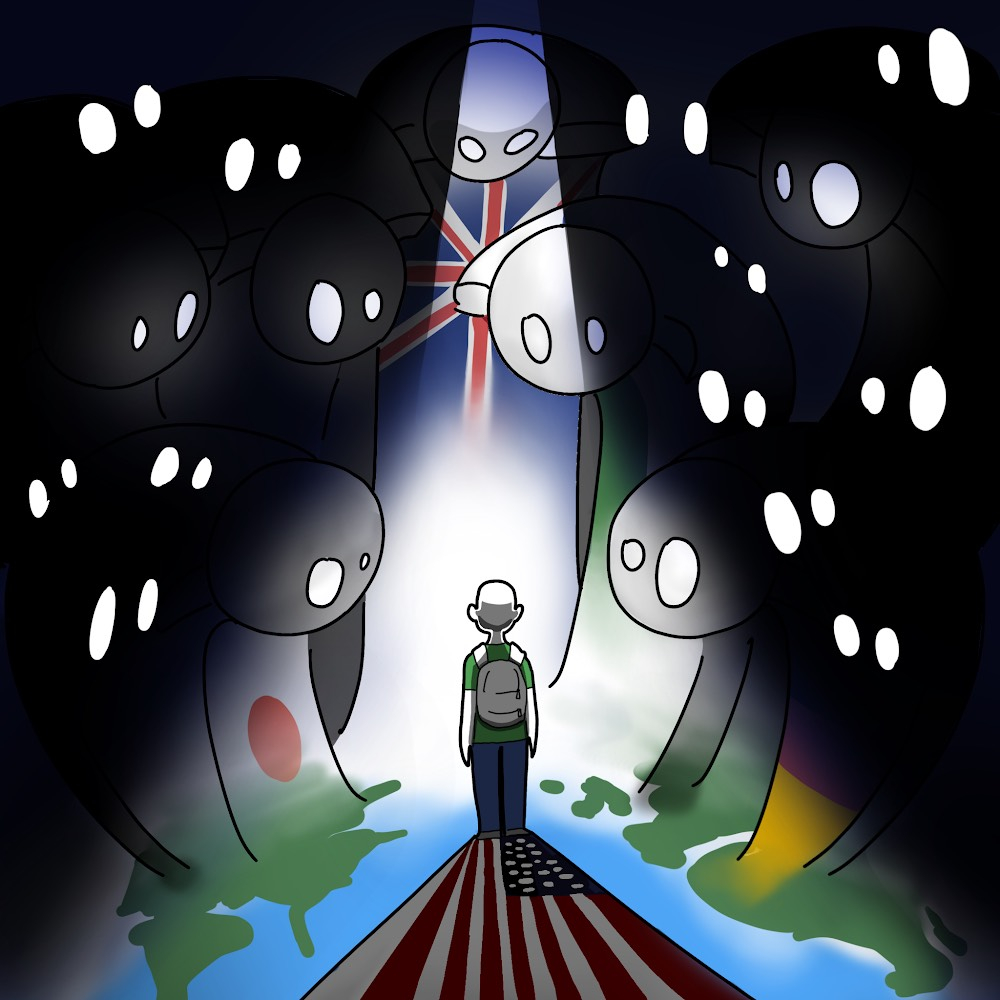 Many of the people I have encountered in my time at King’s College London want Americans to fulfill their expectations of us as being uneducated, bigoted and extremely nationalistic. On the other hand, many remain compassionate and some are even interested in the state of American politics. The one thing that everyone, regardless of opinion, wants to hear about is Trump.

They ask me what he’s like, as though I know him personally. What do I think of the detention centers at the borders? The Kavanaugh hearings? Turning a blind eye to the murder of Jamal Khashoggi? The lack of sensible gun laws? I even think that sometimes they hope I will defend the disgusting actions of the president to uphold the stereotype of the ignorant American, but they still seem relieved when I condemn any specific policy or event mentioned.

But here’s the thing: There are still Americans here in London and around the world who will, for whatever reason, defend and praise the Trump administration. I would hate to feel as though they are representing me, and I am certain that they would not like for me to speak on their behalf. This case is universal and applies to British students and their feelings on Brexit — among the majority of students who oppose Britain leaving the EU, there is a small but loud minority who disagrees. I have grown increasingly frustrated with the homogenization of Americans and the apparent lack of reciprocity of respect for cultural differences from many of the Brits I have encountered thus far.

One day, following a group presentation in one of my classes, I found myself in the middle of a discussion with mainly British students from my course at our school’s bar. Their questions started off as innocuous — What is Los Angeles like? Do I really live next to celebrities? Have I ever been to Texas? (I’m still not sure why Texas seemed so exotic and exciting to them.) But the conversation soon turned sour when one of the members of our discussion brought up politics. What began as an interesting conversation about gun laws and safety quickly devolved into a heated argument as I debated with a fellow American who had moved to the Netherlands at a young age. Once he left to retrieve another pint, the talk among the Brits immediately turned to the vein of “all Americans are gun nuts.”

Why ask me about my opinion and experience as an American if it will just be shot down? Does my personal experience only carry weight if it confirms the asker’s argument?

One of the best parts of the study abroad experience is meeting people from new cultures and gaining a more holistic worldview. I always try to keep an open mind and listen to people’s personal experiences before contributing my own, but this time I felt that I could not keep quiet.

“You literally just heard me telling this guy that I don’t support guns, so why would you immediately make generalizations?” I asked her, to which she responded by imitating a Valley girl accent back to me. Unfortunately, it seems as though even at a renowned university with a diverse population of international students, some people at King’s still firmly remain in the category of wanting to believe that all Americans share the same hardline conservative values of our government.

A major factor in my decision to study abroad was to gain an international perspective. As a political science major with an emphasis in international relations living in another country seemed like the best possible way to ditch the American perspective in favor of something more well-rounded. To my surprise, however, the U.S. outlook is alive and well, even across the pond. Classes still have a heavy focus on U.S. foreign policy, religion, intelligence services and military action, and it seems as though it is often used as a benchmark for comparison.

While escaping preconceived notions of American culture anytime in the near future is statistically unlikely, I feel empowered to contribute to change our reputation. Obviously, while I cannot spread the word worldwide, hopefully I will be able to make waves in my little pond of King’s College. Most of all, I am hopeful that my classmates will learn not to generalize other cultures and to stop treating us as spokespeople for such politically, racially and socially diverse places.

Hannah Jackson wants her international classmates to know that she won’t speak on behalf of every American.