The 12 lost their lives when a gunman entered Borderline Bar and Grill in Thousand Oaks on Wednesday during the bar’s College Night.

This was the second mass shooting memorial held by UCSB students in the past 10 days. 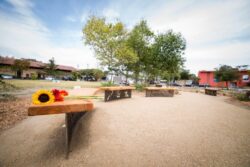 Jeike Meijer, Associated Students (A.S.) External Vice President of Local Affairs (EVPLA) began the memorial by reading the names of the 12 victims that were killed on Nov. 7.

Meijer was also one of the organizers who helped plan the memorial, which was put on by the EVPLA office.

Since Thousand Oaks is a little over an hour south of Santa Barbara, many UCSB students that are from the area attended the vigil with sorrow in their hearts.

Alli Adam, an on-campus A.S. senator and someone who grew up in Westlake Village – a town that borders Thousand Oaks – spoke to the crowd, telling people to stick together even in hard times.

“I have lived the past three years in Isla Vista but I spent the first 18 years of my life in Thousand Oaks. It’s very easy to blame and thus divide in times like these but I urge you to remember that we are one,” Adam said.

Many faculty members, student leaders and fellow attendees shared the sentiment of the community helping to cope with the suffering that has hurt so many people.

This shooting also resonates strongly in the I.V. community because of I.V.’s own tragedy in 2014.

“It breaks my heart that we come together in this space [Love & Remembrance Garden] near the benches in which each one is dedicated to one of the six victims of the Isla Vista tragedy in 2014,” Spencer Brandt, I.V. Community Services District (CSD) secretary and fourth-year History of Public Policy major, said.

Brandt was also quick to point out how frequent these shootings are happening and how big of a problem this country has.

“We have seen far too many school children, university students, people of different faith, color, etc. killed by senseless gun violence… This does not need to be our future.”

“A couple of nights ago one of the victims, by sheer coincidence, happened to be a survivor of the Las Vegas tragedy,” he said, referencing Telemachus Orfanos, a 27-year-old who died in the Wednesday night shooting.

“When we live in a country where our citizens are at risk of not just being victims in one mass shooting but two and might not live we have a problem, a big problem.”

I.V. CSD President Ethan Bertrand also shared the same sentiment as Brandt. He asked people to find a way to make a change in this system.

“We go through this too many times, we have gathered at this beautiful garden too many times… The only way we are going to change this is by action, we cannot continue to do the same things and expect different results,” Bertrand said.

“We have seen far too many school children, university students, people of different faith, color, etc. killed by senseless gun violence… This does not need to be our future.”

Bertrand listed out several things individuals can do to try and create change, such as voting, writing to a senator or having difficult conversations.

He closed his statement by playing a rendition of “Imagine” by John Lennon, who he pointed out was also killed by gun violence.

“Let’s imagine a world with no gun violence because we can accomplish it if we do it,” he said as he finished his cover.

Despite how difficult the night was, several people said how happy they were that this community continues to come together during tragedy and how it eases the pain.

“It is really easy to feel alone especially when you are away from home. It’s hard not being there when you find out your friends have passed away, but now we have [the vigil] right now and it helps,” Iris Renessen, second-year pre-biology major and Westlake Village resident, said.

Adam said she was happy for everyone that showed up tonight, encouraging a sense of community during hard times.

“I hope that this vigil gives you the healing and peace it has already brought me just standing here looking at my amazing community,” Adam said.