The Daily Nexus
Opinion
Let’s Raise a Glass to Lowering the Drinking Age
November 8, 2018 at 7:42 pm by Carla Wenzel

A couple weeks ago I entered this bubble of a community called I.V. straight from the thriving streets of Berlin. Flashed by the broad sunlight, the five-minute walk to the beach and the happy people everywhere, I could not help but fall in love with what I get to call home for the following few months. It didn’t take long until I was able to experience what it is like to party on famous Del Playa. It is definitely different from the usual club experience; I felt like I had teleported directly to the set of the movie Project X. But there was one thing about the party culture that is not necessarily limited to I.V. and which seemed very odd to me.

A large number of UCSB students have not yet reached the magic age of 21 but are still quite skilled when it comes to playing drinking games or chugging beer. It is more than obvious that restricting alcohol use for those under 21 is not helping to remedy alcohol abuse, even though the legal drinking age makes it harder to buy the poison of choice. There are always older friends, siblings and roommates you can ask to buy it for you.

Drinking alcohol is forbidden makes drinking more dangerous because it fosters an environment of secrecy and hiding.

The question I want to raise in this article is not about whether you should drink or not. We can all agree on the fact that alcohol damages your brain, especially when your brain is not fully developed yet — it is better to not drink at all.

I want to focus on the way the American government intended to protect minors from alcohol abuse, because I do not believe that a legal drinking age of 21 is the best way to do so.

First, I would like to discuss  the situation we have in Germany, where I am from. German teenagers are allowed to buy beer and wine as soon as they reach the age of 16. Once they reach 18, there are no restrictions whatsoever on buying alcohol. While we are known worldwide for Oktoberfest and it may seem like everybody in Germany drinks beer like it is water, this is definitely not the case.

I am not going to lie — we have problems with young people excessively drinking and passing out, too. Nonetheless, according to a study by Germany’s Federal Center for Health Education, in 2016 only 10 percent of 12 to 17-year-olds drank alcohol on a regular basis compared to about 20 percent in 2004. Being allowed to drink earlier leads to a more mature handling of alcohol consumption, at least, based on my own experience. Underage drinking in the U.S. does happen, and the National Survey on Drug Use and Health found that two-thirds of the teens that drink alcohol actually tend to binge-drink. 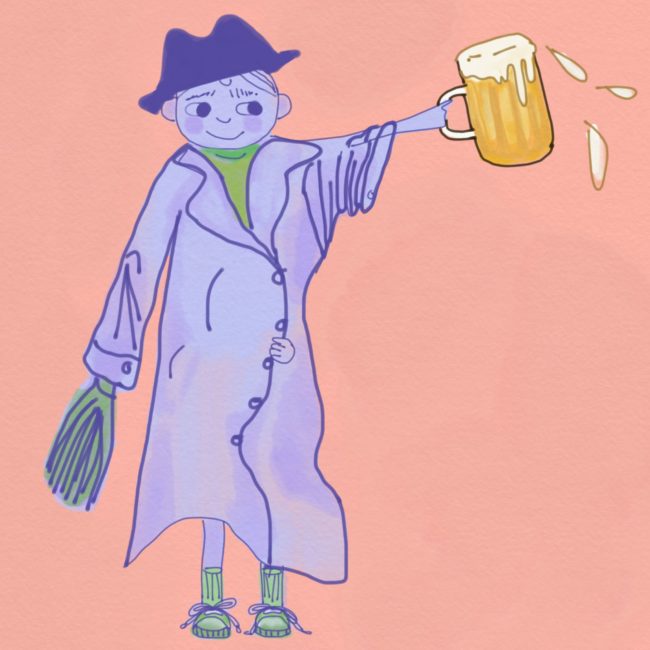 The fact that drinking alcohol is forbidden makes drinking more dangerous because it fosters an environment of secrecy and hiding. This is a leading cause of binge-drinking. Instead of having a few casual beers at a bar or club, they have to pregame at home secretly. This will not lead to mature drinking behavior. So yes, alcohol is dangerous, but what is more dangerous is keeping it away from young people to the extent that they develop a secretive binge-drinking behaviour. In my opinion, the benefits of being a mature adult outweigh the health risks of drinking at all.

Also, the certainty of knowing that you will not be heavily punished for trying a beer while you are still 17 years old makes it more likely that you will pace yourself and try alcohol step-by-step. Teenagers sometimes tend to do the exact opposite of what they are told to do simply because they do not want to listen to authorities and instead try to test their limits. If teenagers are not punished by the police or their parents for drinking, the incentive to provoke their parents by drinking alcohol is not as big as it is with a legal drinking age of 21. You know that your parents and the government trusts that you know how to handle alcohol reasonably.

In Germany, the youths are not separated from the drinking adults; they are allowed to have a beer with their parents in a bar. They do not feel patronized. A government could also make the laws restricting alcohol so strict that the majority of young people are afraid of the consequences and will act rationally by obeying them, but this is the wrong approach when it comes to living in a democracy with responsible human beings.

I think that having a lower legal drinking age is more about raising the youths as reasonable human beings rather than keeping them from something that is bad for their health. These young people still might make mistakes and end up drinking too much, but I think it is more important to guide them on their way and try to help them make responsible decisions. It would be more helpful if all the programs about alcohol education could talk with young individuals on the same level about drinking and its risks. It would be more helpful if alcohol education programs talked with college students about drinking and its risks in a common language. They should guide them through their first sips while they are still in high school.

If the American government trusts people under 21 and treats them like the responsible, mature adults they are, they will act as such.

I imagine that alcohol education programs would be successful in high schools, but since teenagers cannot legally drink, these programs are not required by schools. Several of my German classmates who attended American high schools, as well as several American exchange students, told me that nobody talks to them about drinking alcohol before the age of 21, even though underage drinking happens in American high schools, too. So, when people get into college and have to attend sessions about alcohol education, a lot of them seem to already have had their first drinking experiences. It would be much more useful to educate young people and offer them advice instead of outright prohibiting drinking. Even if you choose to abstain from underage drinking, being educated about it will still help you learn about alcohol and its risk instead of not talking about it at all. Lowering the legal drinking age to 18 will give youths more responsibility, which leads me directly to my next point.

The paradox regarding the legal drinking age is the fact that college students have a high level of intelligence, yet the government still thinks they do not understand the negative effects of alcohol. Students have been accepted to UCSB and other universities because they have proven they can work hard to reach their academic goals. In the fast-paced quarter system, the students are required to keep track of their upcoming due dates, midterms and finals, but they are not granted the opportunity to decide whether or not they can have a beer. In my opinion, this is the wrong signal to send to students. On one hand, young people have to fulfill many academic and social demands, but on the other they do not have the right to freely decide what is good for them.

If the American government allows people under the age of 21 to buy and consume alcohol, it would most likely lead young people to drink more often. However, according to the Amethyst Initiative that encourages rethinking the legal drinking age, we have to talk about new ideas to prepare young adults for responsible alcohol handling. Then, youths would not start binge-drinking the minute they turn 21 (or even earlier). Furthermore, they would not have to worry about getting a ticket for walking down DP with an unopened beer because they would have the right to do so. I think that if the American government trusts people under 21 and treats them like the responsible, mature adults they are, they will act as such.

Carla Wenzel would like to reframe the debate about drinking responsibly.

You’re clearly not paying attention to politics. They are raising age limits on many things, tobacco age limit raised to 21, provisional licenses extended to age 21, need to be 21 to buy a gun, even talking about raising the drinking age to 25.

And they wanna put ciggerettes on the same age as alcohol. Like when is the age raising bullshit gonna stop? 25 to buy ciggerettes and alcohol this is not America anymore we are becoming a third world country where believing in Jesus christ is almost illegal!

When I was growing up, the drinking age in most states was 18. States were pressured by the federal government to raise the age to 21 by restricting highway funds.

One big difference between Germany and the US is that public transit in Germany is almost universally available, so drunk driving is much less of a problem there.

I would support lowering the drinking age, if the driving age were raised to compensate.

As a healthcare provider who sees the results of alcohol every single day, Ms Wenzel’s article saddens me. How very naive.

Agreed totally! The 21 drinking age is an outrage forced on youths in the 80s by Mothers Against Drunk Driving (at a time when drunk driving rates were already going down). Time for young people to make themselves heard to politicians – if you don’t support my right to drink, you haven’t earned my vote.

Libertarian-minded Republicans who want to win the youth vote could make a lot of headway talking about this issue. Hint, hint…

Raising the drinking age to 25 in America? Why? This us a free country isnt it? if your 21 you should make that decision even though the brain isn’t developed till 25 which is true. But it seems like those born in 1998 is the worse year. i lived in Jersey my whole life and i remember being 19 for 3 months and being able to purchase nicotine and tobacco by showing my id. Then in november of 2017 it went up to 21 and wasn’t grandfathered in but im not 21 till july and i was able to get… Read more »