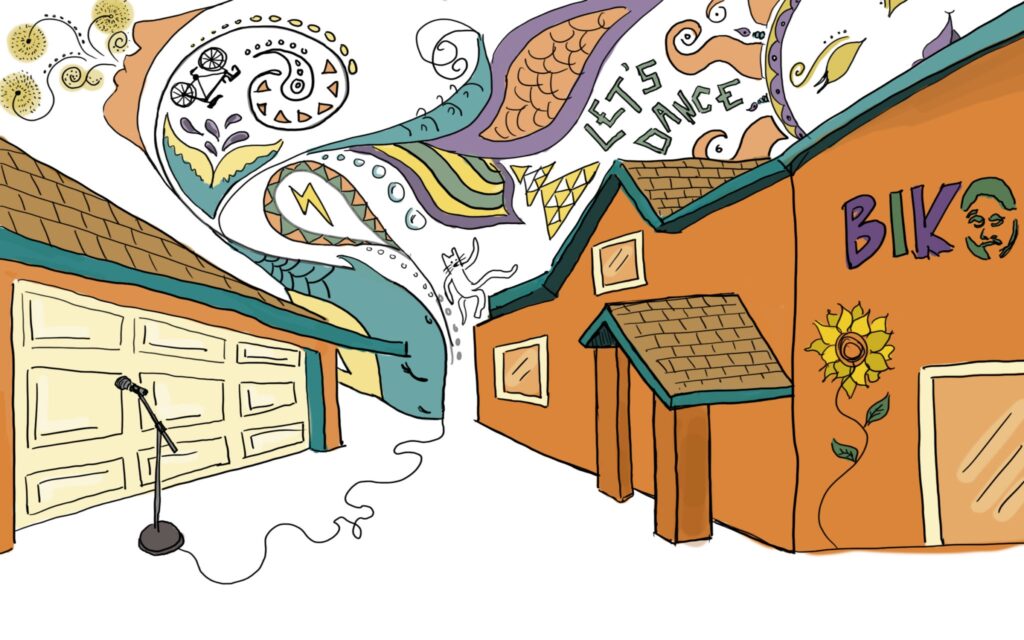 The muffled, steady hum of music guides a group of students away from Sueno Road and into a housing Co-op garage. A few couches accommodate hushed conversations amongst those already there, and any newcomer’s pre-existing social anxiety dissolves into the dim lights and welcoming energy. Some people have never been here before, but the Biko House has a way of making them feel right at home.

Ranging from experimental folk to gothic electronica, an array of local and touring talent showcased their music at the Biko House in an event organized by Funzone on Oct. 17. This recurring DIY event operates under the mission of providing an accessible, diverse and substance-free music community to the Santa Barbara area. Bands such as Deanne Bunn, Diatom Deli, Serpent Season and Roper Rider entertained an intimate crowd of less than 30 attendees on what could have been another boring Wednesday night.

“A lot of the time most of the people who come to these shows don’t know the bands who are playing, so it’s always exciting to see what’ll happen,” Serpent Season’s Randall Leong, a UCSB alumnus, said. “It should get pretty weird, probably.”

Leong, once a Biko House resident, returned to play at this event for the same reason he became involved years ago: the ability to share his music in an environment where creativity is celebrated.

In the spirit of festivity, Serpent Season wore Halloween masks as they strummed electric guitars to their self-described sound of “dreary, ambient folk.” With a single set of string lights illuminating behind them in the dark room, it felt like a live rendition of the scoring to a “Stranger Things” episode.

Even the murals gracing the perimeter of the space introduced a newfound form of expression to the audience, especially as it mutated underneath a projector screening psychedelic images. Musicians rotated through the line up, moving into the space one after another — transforming it into one of their own.

For first-time attendee Gabby Mendez, a third-year English major, the combination of setting and sound is what made her experience memorable.

“I felt like I was on an acid trip, but I’ve never done acid,” Mendez said. “I liked that it was different from what I normally listen to, and how the variety of sounds came together to deliver something really unique.”

Tennessee-based Diatom Deli gathered the largest crowd, filling the room with people both standing and sitting on the floor. Carrying her talent across the West Coast on tour, her multi-instrumental sound encouraged exploration of the unconscious mind.

“This is definitely one of my favorite venues I’ve played at so far on the tour,” Deli Nebletts said. “What I loved most about Biko was that it felt like a safe space and everyone was really welcoming, which makes the world of a difference.”

The Biko House is one of five student housing Co-ops in Isla Vista that stresses the importance of inclusion while supporting a community free of discrimination. The garage space in particular functions as an all-purpose space for the community, hosting events such as art exhibitions and small concerts. The environment not only attracts performers and attendees alike, but is highly valued by those who live there.

“It’s the best thing I’ve ever been apart of at UCSB and I wish I had lived at Biko last year, too,” fourth-year philosophy major Isabella D’Alessandro said. “It’s cool because things like this are so accessible, they’ve definitely been a highlight of my time here.”

The event wouldn’t have been possible, however, without the help of Funzone. Once a location in downtown Santa Barbara, Funzone now operates through Facebook as a key organizational element for booking shows in the area. Working with radio station KCSB to promote events such as these, they are able to foster a space of music for all ages and give underheard bands a platform for exposure.

“Not only for high school students, but even at UCSB there are a lot of kids that are under 21 that can’t go to half of what happens downtown,” Spencer Von Hershman, Santa Barbara resident and creator of Funzone, said. “It’s a nice other option for people who don’t want to party all the time, or simply aren’t interested in partying at all.”

Providing an environment that unifies similar-minded people with something that they are passionate about is the ultimate goal of performances like Wednesday evening’s.

“It’s just a safe place to mess around, no one here is judgemental. People want to hang out with nice people who are here to enjoy themselves and be respectful,” Von Hershman said. “Santa Barbara is a really good community for that.”