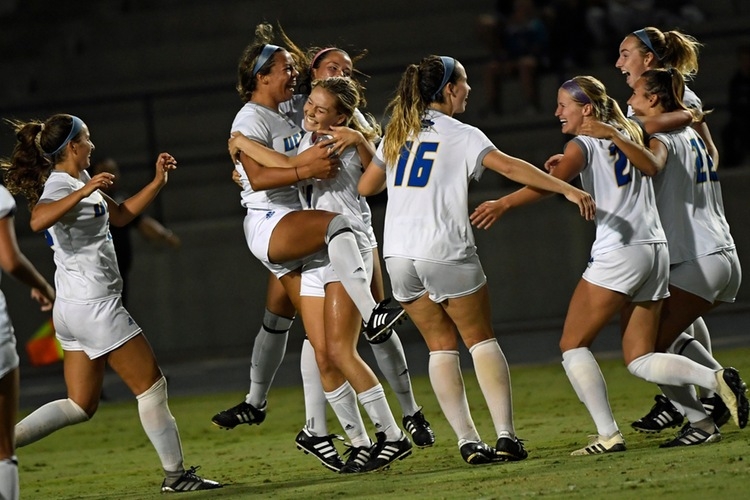 The Gauchos are seeking their first title since 2009. Also, UCSB defeated LBSU the last time the two teams met in a conference final in 2008. Photo Courtesy of UCSB Athletics.

Only one team stands in the way of the UCSB women’s soccer team and its first Big West Conference title since 2009, Long Beach State. With a win on Sunday, Santa Barbara will claim its third conference crown in program history.

Long Beach has had great success against Santa Barbara winning eight of the last 10 matches over the past decade, including a 2-0 win this season the 49ers enjoyed at home. UCSB did win last years matchup, however, 3-0.

Additionally, this will also be the second time these two teams have met in the Big West Championship with the first match favoring the Gauchos in penalty kicks back in 2008.

If the Gauchos hope to repeat that favorable outcome then it will definitely need to rely on some of their star offensive players that have carried them all season. Junior forward Shaelan Murison definitely fills this role.

Murison has scored 10 goals on the year, the second most in the Big West. Additionally, her 24 total points also rank second in the league.

UCSB will also need to rely on Mallory Hromatko and Katherine Sheehy whose six assists and five assists rank first and second in the Big West, respectively.

In addition, Hromatko also fulfills a tremendous role on the defensive end as she constantly makes her presence felt when the opposing team tries to enter top third of the field. The senior was also named All-Big West First Team for her performance this season alongside Murison.

The offense will need to be running on all cylinders as they face off against the Big West Defensive Player of the Year, senior defender Sarah Maher.

Defensively, junior goalkeeper Hannah DeWeese will also need to play a key role for the Gauchos. She has certainly improved her play as the pressure has mounted allowing just three goals in the last five contests while tallying 17 saves. She has a total of 57 saves on the year.

She will face a flurry of tough Long Beach State scorers beginning with the programs all-time leading goal scorer, Ashley Gonzalez. The senior has tallied six goals this year to lead the team in that category and also added two assists. In her career, Gonzalez has scored 34 goals.

Fellow senior Dana Fujikuni will also look to finish her career out the right way. The midfielder was voted the league’s best midfielder of the year and has tallied five goals and four assists on the year.

Gonzalez and Fujikuni played the biggest role in fueling LBSU’s potent offense which was ranked No. 1 in assists (31) and in points (91) and No. 2 in goals scored (30).

UCSB’s match against LBSU will be a tough one, but if the Gauchos have proven anything in the past few weeks they have shown that the pressure has yet to get the best of them.

A few weeks ago Santa Barbara was in danger of missing the tournament for the third straight year but tough, determined play helped them win five of its last seven ball games to put them in position to win a title.

Now, the Gauchos just need to win one more game to finally claim a Big West title since the turn of the decade and earn a berth to the NCAA Tournament. It won’t be easy, but nothing worth winning is.

UCSB will face LBSU at 1 p.m. on Sunday, November 4 at Anteater Stadium. The game can also be streamed on bigwest.tv.