The Daily Nexus
Sports
Together Again, Conteh, Michael, Enjoy Bond Like No Other
November 1, 2018 at 5:15 am by Brandon Victor 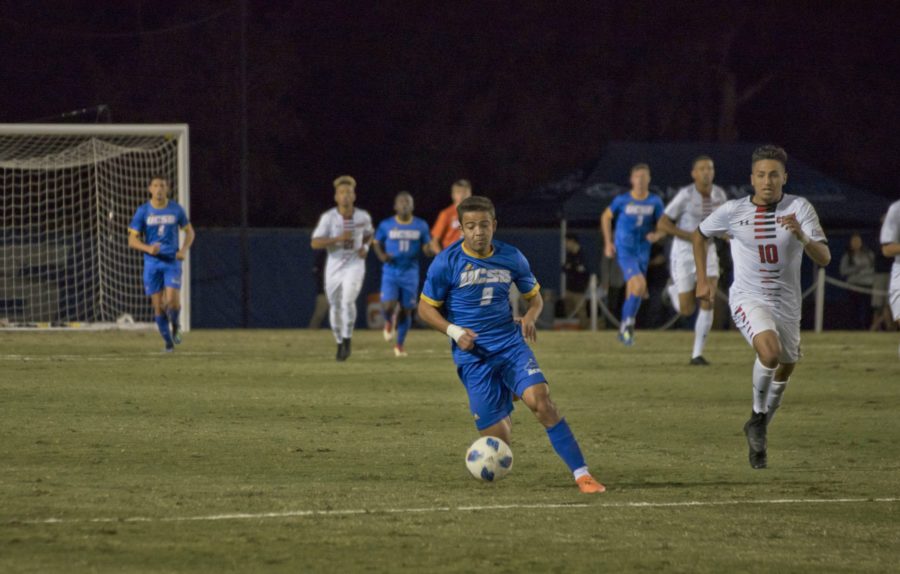 The latest of these goals came on Saturday, in the Gauchos must-win matchup at Harder Stadium against CSUN. After a lackluster first half, sophomore Kaya Fabbretti scored early in the second half to put UCSB up 1-0 over the visiting Matadors. Against the explosive offense of CSUN, the hosts knew that one goal would likely not be enough.

When Conteh picked the ball up on the right wing in the 54th minute, he immediately looked to break, showing off the pace and touch he had curated as a forward earlier in his career. When he reached the box, he picked his head up, laying off a perfect pass to Michael’s right foot — just as he’s done so many times in his soccer career.

Michael quickly flicked the ball onto his left foot and blasted a shot to the bottom left corner of the goal. Just like that, it was 2-0 Gauchos.

Three years earlier, the duo scored almost an identical goal, where Michael made a run behind the defense and Conteh provided the service. That very goal would give Dunn High School the lead in the CIF championship game —  a lead they would never relinquish en-route to the first-ever title in the school’s history. Google that game, and one of the first images displays an absolutely jubilant Michael jumping into the arms of Conteh after that goal.

Four years prior to that magical moment, before Conteh had ever even seen the United States, the boys met for the first time just outside of their hometown of Freetown, Sierra Leone. Both boys received full-ride scholarships to the Craig Bellamy Academy — a boarding school that promised the best players in Sierra Leone a chance to develop their soccer skills. At the time, Michael and Conteh were merely 11 and 13, respectively.

The two boys came from vastly different backgrounds. Conteh had never left his native country, and was not always guaranteed three meals a day. Conversely, Michael and his family had travelled to both the United States and Europe.

But from that moment, when the two players moved into the academy, their lives would be intertwined for the next eight years.

Conteh also reflects fondly on the long bus rides that team would take, often spanning eight hours as the team drove the entire distance of the country. Conteh remembers messing around with Michael and his teammates, singing joyfully after victories. After spending months on end with each other, Michael and Conteh easily became friends.

Their bond extended all the way across the world to Los Olivos, Calif., where in 2013, coaches at Dunn School recruited Conteh to come play at their boarding school. When he first arrived, Conteh struggled to adapt to life in the United States, with his friends telling him later that he “didn’t say a word” during his first three weeks in the States. Eventually, through the help of his coaches, he became acclimated to life in the country. Conteh played well during his freshman and sophomore campaigns; both years, however, the team flamed out in the opening round of the CIF playoffs

In 2015, the younger Michael would join him, the duo reunited once again after he was offered a scholarship to play for Dunn.

It was here where their bond was truly forged — a friendship based on a common upbringing, success on the pitch and a healthy dose of competition.

“In high school, we would always compete to see who could score more goals,”Michael said. “The first year, when I was a freshman and he was a junior, we scored the same number of goals.” He chuckled, before adding, “The next year, I blew him away.”

Off the pitch, this competitiveness manifests itself mainly in video games; according to them, Conteh wins every time in FIFA, while Michael dominates in Fortnight.

On the pitch, however, the two love to banter, making sure the other player knows if they’re playing poorly.

“It really raises my level of play, knowing that Michael will give me crap if I mess up,” Conteh said.

It is a system that only works because of the familiarity between the two; both realize that any negative remark is merely in jest.

“Our high school teammates will still text us if we have a bad game,” Michael said.

Even during the interview with the two, the playful competition is on display. When I ask Conteh about the assists he’s had to Michael this season, he starts laughing, glares at Michael and says, “There should be a lot more than there are!”

Of course, the two can also be cordial. When asked about his transition to Santa Barbara, Michael discussed the benefit of having a familiar face in Conteh to ease his way into both the team and the college experience.

But for defenders who stand in the way of either Sierra Leonean, there is no cordiality.

“We love to smack-talk defenders,” Conteh said. “I remember during the Sacramento State game this year, Michael was bantering with the defender pretty much the whole game. Every time he got the ball, I would yell at him ‘Go, take him on’ in our native language of Krio.”

For a duo that was so resoundingly successful in Sierra Leone and in high school, adjusting to college soccer has been difficult at times. At times, the two have struggled to come to terms with losing, especially after a subpar season last year in which the Gauchos went winless in their first six matches. The star duo have been forced to adjust their mentality, and in some instances, their positions, at Santa Barbara.

Growing up, both players played up front, using their pace and precision to blow defenders away. During those years at Dunn, the two would often switch between playing center forward and winger, utilizing the chemistry they had created over the years to torment defenses.

While Michael is still tormenting defenses up front, Conteh has been forced to completely adjust his mentality in college. When Conteh transferred from Loyola Marymount University to UCSB last season, the coaching staff asked him to use his speed in a more defensive role. This season, he has slotted in as a central defensive midfielder, patrolling the middle of the field and linking up play between the backline and the forwards.

“We have friends and coaches from high school who text us like ‘Who is scoring more goals this year?’” Conteh said. “I tell them, ‘Well obviously Michael is because I play defense now!’”

Even Michael at times has had to adjust, switching from central forward to a wider role in order to get the ball deeper and take on defenders. But no matter where the two are positioned on the field, the chemistry they share is evident — a chemistry that has been nurtured by eight years of competitive soccer played side-by-side. And through it all, they have used each other as a pillar, a constant that allows them to feel more at home even during the difficult times.

Despite their vastly differing roles, both players have demonstrated their quality on the pitch over and over again this season. By far the most consistent offensive player, Michael has already tallied seven goals this season despite defenses consistently double and triple-teaming him. Generating national acclaim for his performance, college soccer news site Top Drawer Soccer named Michael as the 71st best player in the nation during their midseason player rankings.

While Conteh may not get the same national attention, his defensive prowess has been one of the key reasons the team has kept two consecutive clean sheets. In Saturday’s match, Conteh chased down a Matador that was on a breakaway in the 33rd minute, keeping the match scoreless. Offensively, Conteh is tied for the team lead with three assists, with two of those three contributing to a Michael goal.

Now that the Gauchos have found their stride, shooting back up to 43rd in the RPI table, the two may get the opportunity they deserve to shine on a national stage. With the Gauchos’ big win in their season finale against Cal Poly, they entered the first round of the Big West Tournament with momentum; however, the team fell to Cal State Fullerton in a match ultimately decided by penalty kicks.

Despite the loss, don’t count Conteh and Michael out. A lot has changed since their early days in Sierra Leone. What hasn’t changed, however, is their ability to score and to dominate all facets of the game. And, if 2015 is any indication, their ability to win a championship in the future hasn’t changed either.

A version of this story appeared on page 6 of the Nov. 1st print edition of the Daily Nexus.