The Daily Nexus
Volleyball
One Upset Down, One to Go, for Rolling Gauchos
November 1, 2018 at 5:00 am by Spencer Ault 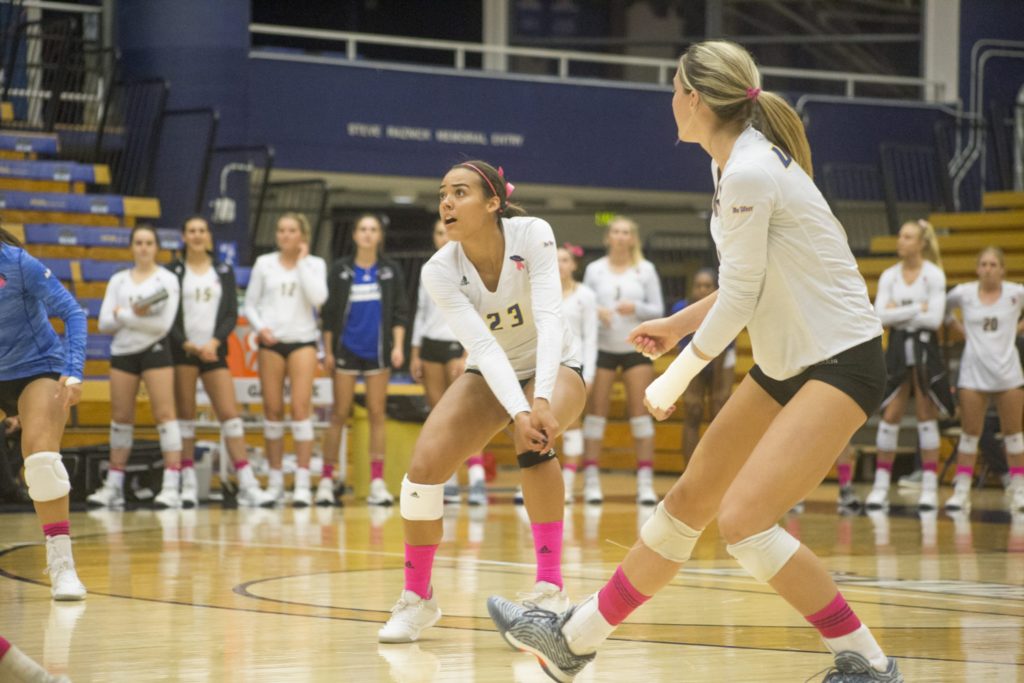 The UCSB women’s volleyball team got its biggest win of the season so far last Saturday when they upset Hawaii with a 3-0 sweep in Honolulu. On Friday, the Gauchos will try to one-up that victory when they take on No. 17 Cal Poly in the Thunderdome in the second installment of the Blue-Green Rivalry this season.

The first installment didn’t go so well for UCSB, as Cal Poly defended their home turf with a sweep of the Gauchos back on October 12. It’s a whole new ballgame now, however, with Santa Barbara, now 14-9 and 6-5, coming off of its best win and Cal Poly, at 19-2 and 9-1, coming off of its worst loss.

Ironically, both of those matches came against Hawaii. The Gauchos had one of their best defensive matches all season against the Rainbow Warriors in their 3-0 sweep, holding their hosts to a .118 hitting percentage while piling up ten blocks. The Mustangs, on the other hand, lost their first game since August on Friday night in Honolulu in a 3-2 thriller.

Just going off of that mutual opponent record, then, the Gauchos have a chance to pull off the major upset on Saturday night.

Doing so will require UCSB to keep up its defensive effort, something that the team has struggled to maintain consistently. In fact, the last time the Gauchos put together a stifling defensive performance against Hawaii, they followed it up by allowing Cal Poly to hit at a .386 clip the very next match.

A repeat of that defensive performance would be fatal to any hopes UCSB might have for a second upset in a row. The Rainbow Warriors beat the Mustangs with a balanced attack featuring five players with at least eight kills, but it’s unlikely the Gauchos will be able to do the same.

Instead, UCSB will need repeat performances from Emilia Petrarchi (16 digs against Hawaii) and Nicole Omwanghe (seven total blocks, tied for a season-high) on Friday night. Those two were the linchpins to the Gaucho defensive effort in the first upset and they’ll likely have to fill the same role if there’s to be a second one.

Most of UCSB’s defensive attention will likely be focused on Cal Poly’s star outside hitter, Torrey Van Winden. The junior is sixth in the nation with 4.97 kills per set and was the Mustangs’ only player with double-digit kills against Hawaii last week with 21.

Van Winden posted 10 kills against just one attack error the last time Cal Poly took on UCSB, so the Gauchos are quite familiar with what kind of damage the outside hitter can do. They’re also well acquainted with how dangerous the rest of the Mustang attack can be. Three other attackers (Adlee Van Winden, Meredith Phillips and Madilyn Mercer) have at least 100 kills this season, and those three encountered little resistance when they faced the Gauchos last.

UCSB has a chance to put that rough defensive showing behind them for good with a stronger performance on Friday night. They’ll need to show that they can sustain their defensive success, however, or it’ll likely feel like a re-run.

Of course, the Gauchos will also have to excel offensively if they want to bring down the best team they’ll face all year. Star outside hitter Lindsey Ruddins faltered a bit against Hawaii with 11 kills on a hitting percentage of just .128, and while her team still picked up the win that’ll be a much more difficult task on Friday.

Not only will Ruddins have to shine on Friday, but her complementary players will have to back her up as well. The younger Ruddins, Gigi, did an able job of that against Hawaii with 10 kills. The Gauchos will need more of that, as well as strong outings from junior outside hitter Torre Glasker and sophomore middle blocker Rowan Ennis.

This past Sunday, October 28, marked the two-year anniversary of the last time UCSB beat Cal Poly. That’s daunting, but it’s a shorter period than the five years it took to beat Hawaii before last Saturday. The Gauchos ended that losing streak, so why not another?

UCSB hosts Cal Poly in the Thunderdome on Friday night at 7 p.m. for the second Blue-Green rivalry game of the season.