The deadline was originally extended to Oct. 26 after the election failed to meet the threshold by the original deadline of Oct. 18. It was later extended to Nov. 2.

Elections Board extended the deadline again to Nov. 4 on Friday, citing “emails from concern[ed] students regarding the voter threshold” as the reason. 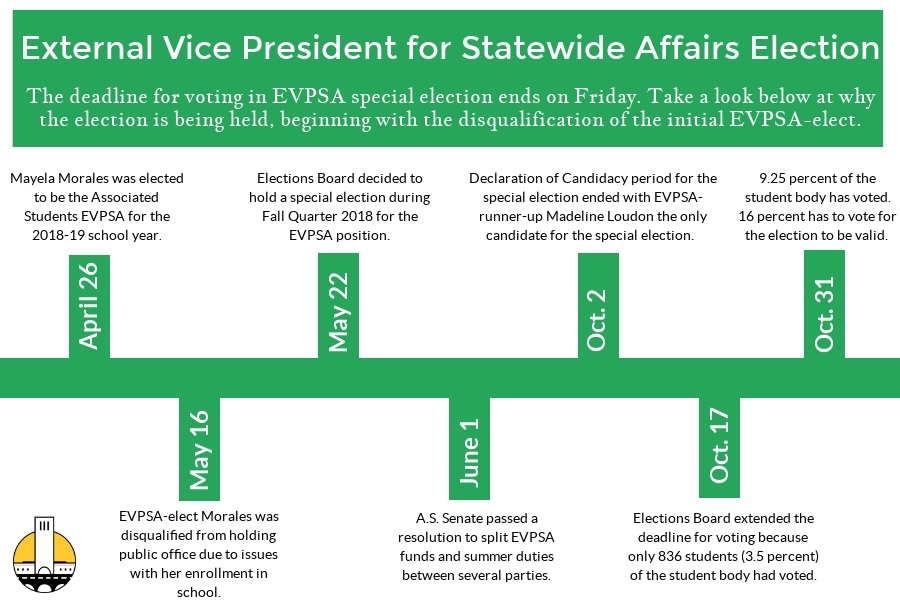 Only 9.25 percent of the student body has voted as of Oct. 31, according to Elections Board Chair John Paul Renteria.

The Board set the 16 percent threshold by looking back at the voter turnout during previous special elections but briefly considered halving the threshold to eight percent to fill the office, according to minutes from the board’s Oct. 18 meeting.

“16% is a pretty huge number for a one-person special election and there’s not really much advertising for [Madeline Loudon] like you would usually do during an election period,” Zeina Safadi, Associated Students (A.S.) Attorney General, said in the meeting minutes.

At the Oct. 25 meeting, Madeline Loudon, the sole candidate for the EVPSA position, argued that the threshold was unlikely to be met.

Loudon was the runner-up in the Spring 2018 Election.

“I’ve been campaigning on this campus for three years now and I know the feasibility of trying to get students to turnout and I know how apathetic students can be. I believe that we are not going to hit the threshold by the second date for sure,” Loudon said.

In the meeting minutes, Elections Board Member Andrew Yan noted that the office would still be able to function without the External Vice President For Statewide Affairs (EVPSA).

“There are mechanisms that allow the EVPSA office to continue if that position remains vacant,” Diana Collins Puente, Elections Board advisor, said.

A.S. Senate passed a resolution over the summer to allow the duties and funds of the office to be split, stating that a bulk of the position’s duties began over the summer as opposed to Fall Quarter.

At the Oct. 24 Senate meeting, Alexandra Gessesse, who has been fulfilling some of the duties of the EVPSA in her position as campaign organizing director, urged the Senate to encourage their constituents to vote.

“We still haven’t met the threshold, and our office is starting to [get] our nose deep in work regarding requisition forms and things like that,” she said. “We don’t have an EVPSA, and we won’t have one for the entire year, and that’ll be really hard for our office.”

“Campaign as if you were campaigning for yourself.”

While Elections Board decided against halving the threshold for the time being, they are putting their efforts toward their “Get Out The Vote” campaign by setting up a voting booth at Pardall Center and a mobile voting booth on campus.

They also partnered with the A.S. Ticket Office to send an email to students who purchased tickets to the annual Delirium concert put on by A.S. Program Board.

Loudon did not appear to be actively campaigning by the time Elections Board held their Oct. 11 meeting and was unable to make it to the candidate forum on Oct. 5.

If the minimum voting threshold is not reached, the EVPSA position will remain vacant until the Spring Quarter 2019 elections.

Updated [Nov. 3]: This article was updated to include information about the second extension of the deadline.