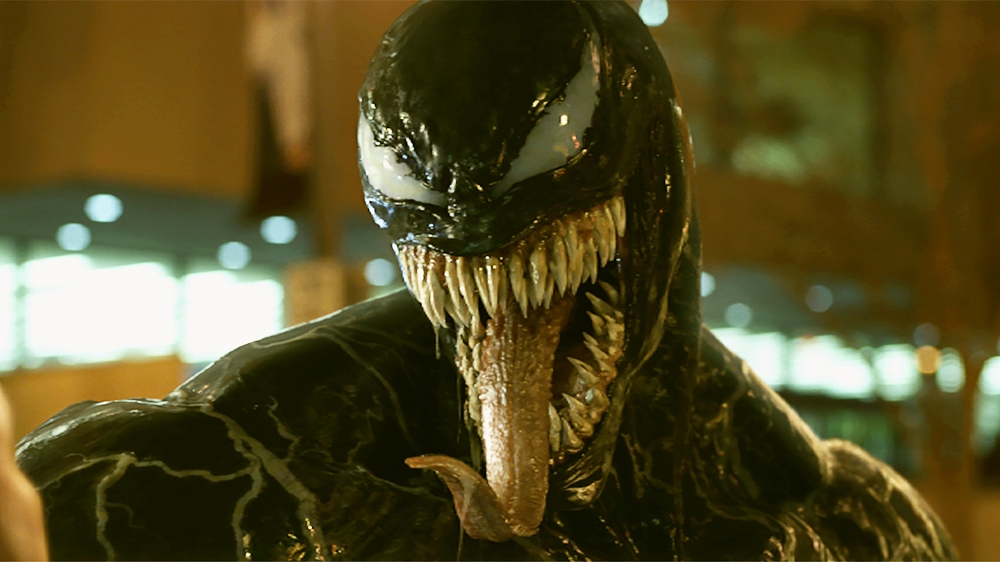 Before I get to the actual review, you probably want me to address the elephant (spider?) in the room (not in the room?)

Venom is heralded as one of Spider-Man’s greatest foes, and Spider-Man is directly involved in Venom’s comic book origin story. The question is, can Venom hold his own movie without his better third?

Venom has Spider-Man’s eyes. Venom has powers that are mostly Spider-Man’s. I mean, come on! In Venom’s appearances in comic books, animated movie and other forms of media, he has a spider symbol on his chest just like Spider-Man! The answer to the question is a remarkably solid yes.

Now the bigger question is how the hell did director Ruben Fleischer (“Zombieland”) manage to make a pretty decent movie?

To prevent any confusion, I will avoid making any comparisons to the comic book source material.

It’s probably best to start from the beginning of the film, during which we’re introduced to a space shuttle crashing from the depths of the cosmos, carrying astronauts and, more notably, slimy aliens known as “symbiotes.” These symbiotes bond to other organisms by submerging their liquid bodies into the host, typically gaining full control.

Why bond to other organisms? Shockingly enough, these aliens can’t survive in a foreign, oxygen-rich environment like Earth. Unfortunately, symbiotes can’t just bond to any organism à la blood types and organ transplants; they need to find an exact match, or the host will die within minutes.

Our reluctant hero, journalist Eddie Brock (Tom Hardy), just so happens to be an exact match. Hardy delivers an immersive experience both as Eddie Brock and Venom and also voices the titular symbiote/symbiote-human pairing. The film delves into several inconsistently paced and edited themes. At times the film is portrayed as a horror film, as a thriller and, perhaps most frequently, as an action film. Despite the sometimes inconsistent editing of the film’s themes, Hardy manifests these themes and immerses the audience in them exceptionally well.

The film’s antagonist, CEO of the Life Foundation Carlton Drake (Riz Ahmed), sees a world “on the brink of collapse” and wants to use these symbiotes to forcibly evolve humanity. Though his goal is somewhat noble, Drake leaves behind no moral ambiguity, considering human beings as “disposable” and willingly subjecting humans to disturbing deaths as he tries to find the key to achieving his goal.

Investigating the Life Foundation, the Venom symbiote bonds with Brock. Brock, while attempting to manage his “guest,”  is hunted down by Drake’s men as he simultaneously assesses what the symbiote is doing to him with the help of his former girlfriend, Anne Weying (Michelle Williams). As the symbiote and Brock bond physically and socially, Drake bonds with another symbiote, Riot. Brock and Venom seek to stop Drake and Riot, who set out to obtain millions of symbiotes so that Riot may take over the Earth and Drake may evolve humanity.

A fight between Venom and Riot breaks out, featuring excellent cinematography, choreography and, above all, superb special effects, all of which can be seen previously in the film.

Yes, there are some editing and pacing issues (sometimes creating logic holes in the film), as well as a lack of character development, but these issues are ultimately overshadowed by Tom Hardy’s stellar performance, general direction of the film, spectacular effects, choreography and cinematography.

Even if you don’t particularly enjoy the film, I’d highly recommend staying for the scene during the closing credits.