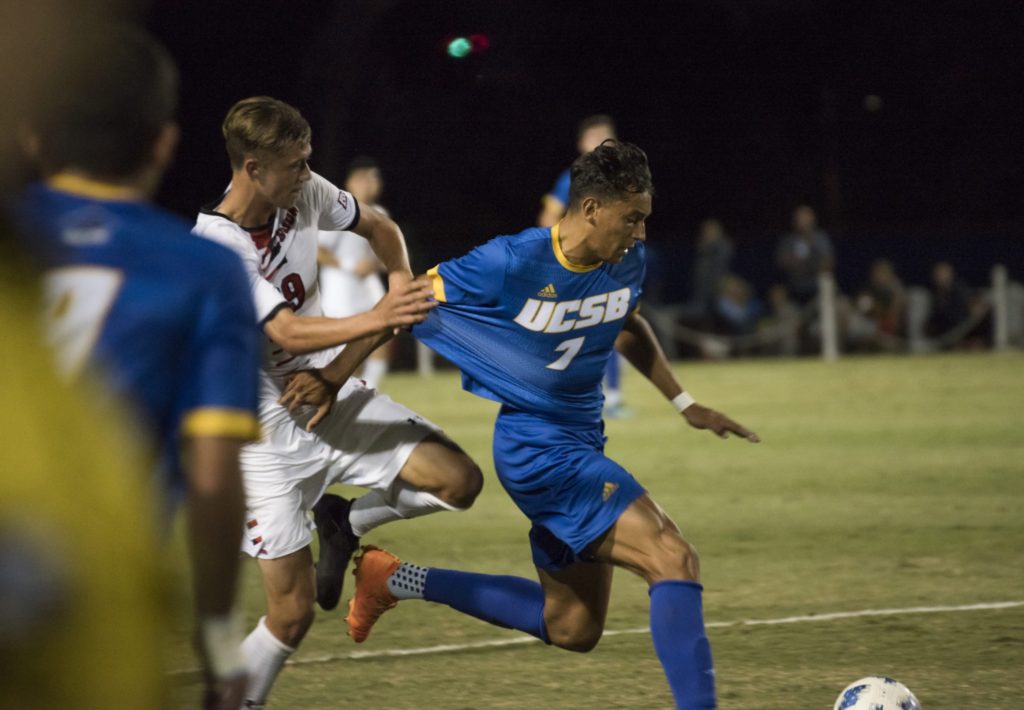 Unbeaten in their last four matches, the UCSB men’s soccer team will need to defeat Cal State Fullerton in the first round of the Big West tournament if they hope to prolong their season.

After a thrilling 2-0 defeat over rival Cal Poly, Santa Barbara finished the regular season with a 10-6-1 record, including an unblemished 9-0 record at Harder Stadium. While the Gauchos tied for second in the conference with 13 points, their conference loss earlier in the season to UC Riverside means that they must play an extra game in order to make the tournament semifinals.

At this point, it seems like UCSB will need to win the conference tournament in order to make the NCAA tournament. Despite their recent hot streak, midseason losses against the likes of Cal Poly and Sacramento State mean that Santa Barbara’s RPI is merely 59 — not good enough for an at-large bid to the tournament.

The first step toward getting that automatic bid will be beating Fullerton at Harder Stadium on Wednesday. Despite being the overwhelming preseason favorite to win the Big West, the Matadors finished sixth in the conference with merely eight points. When these two sides met earlier this season, UCSB defeated Fullerton 1-0 in overtime after a rather underwhelming regulation performance from both sides.

While they haven’t lived up to their preseason expectations, the Matadors still have one of the most talented teams in the conference. Senior midfielder Ross McPhie is a constant threat when on the ball, having chipped in five assists to lead the team. Most of those assists have gone to senior forward Samuel Goni, who leads the team with six goals on the year.

When the Matadors came to Harder Stadium last time, their most impressive player was junior keeper Paul Andre-Guerin, who seemingly snatched every single cross the Gauchos put in the box. In that match, Andre-Guerin recorded four saves, only conceding a goal in overtime.

That has been the trend all season for Fullerton, who have merely conceded 20 goals in 19 games. They play elite defense, but go through serious dry spells on the offensive end.

As of late, the Gauchos have seemed to find their offense, with five goals in their last two games. Perhaps most impressively, only one of those five goals has come from standout sophomore Rodney Michael.

In the Cal Poly match, it was junior transfer Thibault Candia who kickstarted the offense, notching two assists en route to Big West Offensive Player of the Week honors. Both assists found the freshman running past the defense and playing a pass in the box to one of his teammates, with the first going to Kaya Fabbretti and the second to Sahid Conteh.

Something worth monitoring this week will be the fitness of sophomore midfielder Carson Vom Steeg, who left the Cal Poly match early after injuring his leg. Vom Steeg has dealt with multiple injuries this season but has been a calming presence in the midfield when healthy.

The Gauchos continue to dominate opponents with their defense; in their last four home games, UCSB has kept a clean sheet. The duo of juniors Hunter Ashworth and Faouzi Taieb at the back continue to impose their will on opposing attackers. So far this season, the Gauchos have still not given up a goal on a set piece — a rather remarkable statistic.

Last season, Santa Barbara’s season ended at home when they were upset by UC Riverside in the first game of the conference tournament. They will hope that history doesn’t repeat itself on Wednesday when they take on the Matadors, with the winner traveling down to Riverside to take on those very Highlanders on Saturday.

UCSB will take on Cal State Fullerton in a loser-go-home match on Wednesday at 7 p.m. at Harder Stadium.

Cal State Fullerton’s Mascot is the Titan. Cal Sate Northridge are the Matadors…