The Daily Nexus
UC News
AFSCME Protests UC’s Lack of Action During Second Day of Strike, Hundreds Show Up in Support
October 25, 2018 at 12:33 am by Katherine Swartz and Shannon Zhao

In solidarity with the University of California’s largest union, students and faculty members gathered around Storke Tower this week in support of workers protesting the UC’s lack of action regarding ongoing contract negotiations. 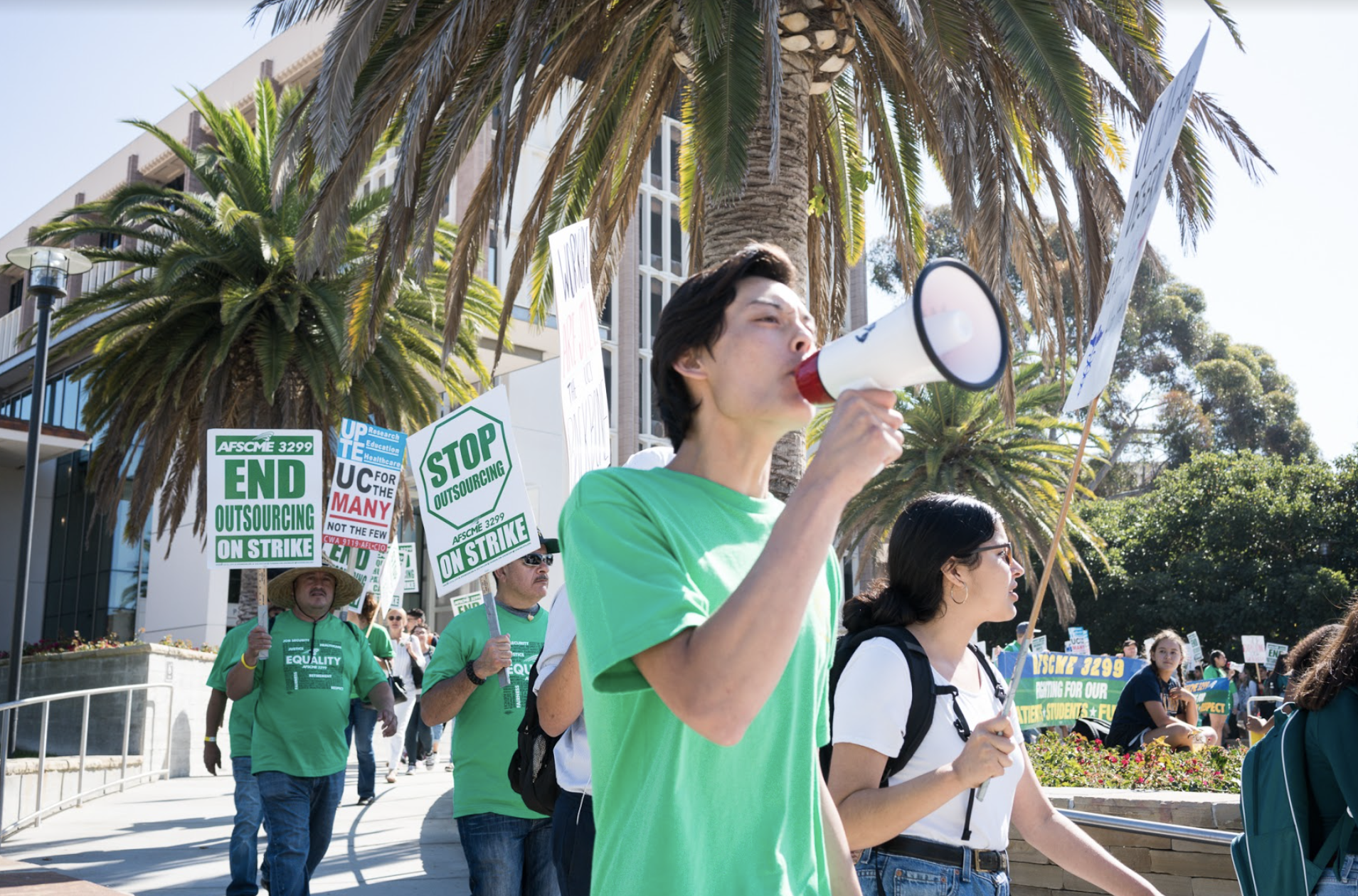 The strikers marched around campus and rallied around Storke Tower.

The strikers are fighting for higher wages, benefits and a greater emphasis on equality within the workforce, according to Michael Kile, American Federation of State, County & Municipal Employees (AFSCME) press lead.

“Over the past 150 years of the UC, we’ve seen the inequality grow, where we see black workers make twenty percent [less] than their white counterparts in the same workspace,” Kile said.

This week’s strike at UCSB is just one part of a larger demonstration across the UC system. Individuals from all ten UC campuses and their respective medical centers are marching in protest.

Since AFSCME representatives are spread across the state, their presence at UCSB wasn’t as large as the previous workers’ strike this past May, according to Cierra Sorin, Graduate Student Association (GSA) president.

“The purpose today is to send a clear message about consciousness and awareness, and to spread our voices about what we want the university to know,” said Juan Donato, head groundskeeper at UCSB and AFSCME strike organizer.

Employees across UCSB showed their support for the strike throughout the week.

“We demand their labor and then demean them for that kind of labor. And it’s really hypocritical and really elitist.”

“This is what my boss wrote to me yesterday: ‘Jay, not showing up for your scheduled shift is not protected speech… If you fail to report to work, it will be considered insubordination/serious misconduct, and your actions will be subject to discipline.’”

Because of this, she decided to further research the rights of the employees who are on strike.

She found that as long an an employee’s contract does not explicitly condemn participating in solidarity strikes, then striking is within their legal right, according to SCIU vs. Fresno In Home Supportive Services Authority from 2015.

Stemmle told the crowd about this decision, hoping to educate UCSB employees who were unaware of their rights.

“If [there are] other people in that situation, I want us to be able to find each other, strategize, talk to each other, get each other the help we need,” she said.

Cathy Murillo, mayor of Santa Barbara, spoke at the rally on Wednesday afternoon in support of AFSCME’s action against UCSB.

Murillo emphasized her personal connection to the strike as she spoke — her grandmother worked in the garment district in Los Angeles and was an organizer for the International Ladies’ Garment Workers’ Union.

“You deserve a salary that respects the hard work that you do. I’ll send some little fairy-vibes up to the Regents, for them to look at the good people here, and give you a good contract, the contract you deserve. I’m here for you today, folks,” she said. 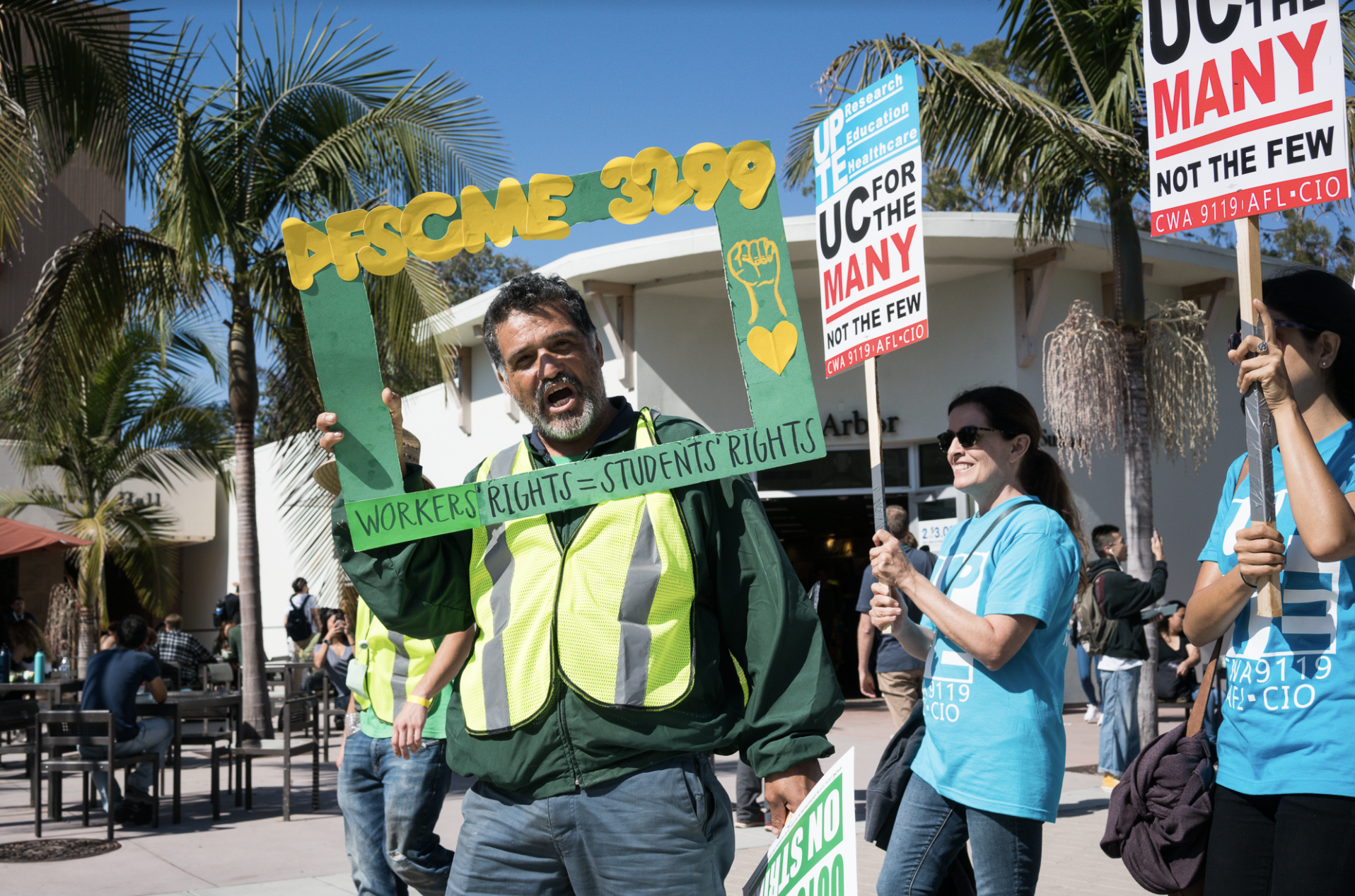 Numerous student groups showed up to support the workers during the strike.

“I’ve seen five or six teaching assistants in my department, including some who are holding sections right now. I’ve seen a couple of our professors bring their classes out,” Sorin said.

One of these TAs was Amanda Rodriguez, a second-year graduate student studying sociology with an emphasis in feminist studies. She brought her students to the rally on Wednesday to observe the strikers and ask questions.

“As a GSA member, the GSA executive board stands firmly behind AFSCME, and as a United Auto Workers (UAW) member I stand firmly behind them, and UC needs to know we’re watching, we care, and we’re willing to mobilize on [AFSCME’s] behalf,” Rodriguez said.

The issue of workers’ rights carries personal significance for many students who marched on Tuesday and Wednesday, including Frances Olague, a third-year psychology major.

“I’ve been coming to these ever since I was a little kid because my mom works for UC Berkeley. It’s really close to home since my mom is a UC worker, and I feel like with their petitions and everything, how it goes through affects my life as well,” Olague said.

Despite the strong student support present throughout the strike, some students were still in opposition. Their criticism is often centered around the workers’ lack of higher education or seemingly self-chosen job choice.

“There was definitely people that didn’t seem too happy with [the strike], but I was happy to be out here, and I was happy to see as many students as there was out here as well,” said June Mihalich, a sociology major in her last quarter.

One post on UCSB’s Free & For Sale group on Facebook mentioned a UCSB student telling the demonstrators to be quiet because she had midterms and yelling at them to “fuck off.”

Dozens of commenters argued whether the girl’s reactions were valid.

“We demand our McDonald’s so fast, but we shame those workers when they ask to at least be able to get a living wage. We demand their labor and then demean them for that kind of labor. And it’s really hypocritical and really elitist to say that,” Rodriguez said.

Leaders of the strike emphasized that it takes the combined action of students, employees and workers to make an impact that UCSB administrators cannot ignore.

“As union workers, let’s stick together. Together, we will make this work, together we will win,” Donato said.

The AFSCME strike will continue on Thursday, Oct. 25 until 6 p.m. at Storke Tower.

A version of the article appeared on p.1 of the Oct. 25 print edition of the Daily Nexus.

When you demand to be paid $15/hr while demanding to import illegals who will do the same job for $5/hr. UC education at its finest.