AFSCME began its second strike of the year on Tuesday, attracting over a hundred workers, supporters and students to UC Santa Barbara’s Storke Tower.

This demonstration follows the statewide strike that took place last May. 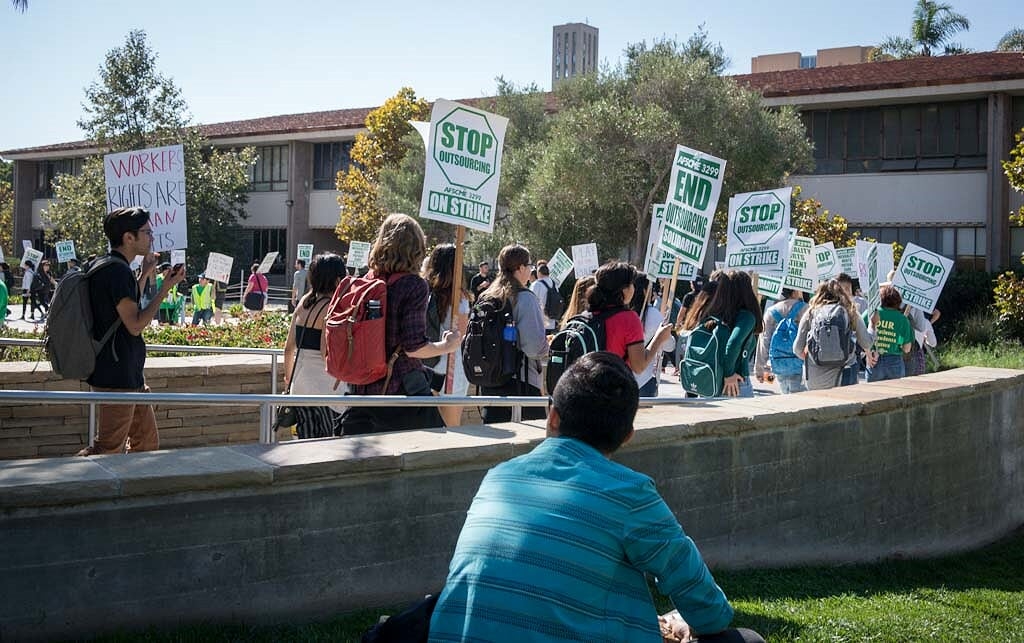 AFSCME initially announced its intention to strike on Oct. 12 following a vote in which 96 percent of AFSCME workers authorized a strike, according to a press release sent out by the union.

“UC is trying to force workers to get by with much less than what’s necessary to provide for our families while lining the pockets of its top brass with excessive salaries, lavish perks and secret slush funds,” Kathryn Lybarger, AFSCME Local 3299 president, said in a press release.

“By shortchanging workers, UC is also shortchanging the students, patients and communities who depend on us. The university is demanding less security and more inequality for tens of thousands of its workers, and that is completely at odds with its promise to ‘pioneer a better future’ for California.”

Today’s protests at UCSB were part of a much bigger UC-wide demonstration that encompasses all 10 campuses.

Nothing has improved for AFSCME workers since the last demonstration, according to Bill Fitzpatrick, campus representative of University Professional & Technical Employees (UPTE).

UPTE workers are striking this week in solidarity with AFSCME.

“The university has now forced [the workers] to accept the terms of the university’s offers without the benefit of any more negotiations,” Fitzpatrick said.

Fitzpatrick, who represents 1,040 people in UPTE and voices their concerns to UC administration, has spent the past year and a half traveling to various UC campuses to bargain for workers’ conditions.

UCSB workers are among the lowest paid in the system, despite the high cost of living associated with the Santa Barbara area, Fitzpatrick said.

“Nobody is asking for an outrageous paycheck. We have a couple of titles here where the potential pay is 52 percent lower than the UC Davis campus for the same job titles. We are demanding an explanation of why that would be fair to us, why we are among the lowest paid campuses.”

For Esther Ramirez, a senior custodian in the Santa Catalina Residence Hall for the past 15 years, the future of UC workers’ conditions remains unclear.

“It’s the second strike; I don’t know what is next,” Ramirez said. “It’s hard because I’m a single mom, and my family of three needs to take other jobs to support the family.”

According to a UC worker who asked to remain anonymous, UC employees are often considered invisible.

Dozens of UC Santa Barbara students, as well as several professors, were among the workers on Tuesday.

Shelsea Sanchez, a second-year political science major and student worker in the dining commons, said she felt the need to support her coworkers in the demonstration.

“I see and interact with these workers on a daily basis and see how the UC is super exploitative when it comes to working conditions,” she said.

“I have to use my voice as a student to come out and represent those people who can’t talk for themselves.”

Sanchez is hopeful more students will gather for the protests on Wednesday and Thursday, adamant that students have a unique platform to advocate for reform.

”Everybody here loves working at their jobs and would love to stay here. But if the UC can’t make it affordable to where we can’t afford to work at a UC and live in the Santa Barbara area, a lot of people aren’t able to stay with us,” Fitzpatrick said.

“We would love to come to terms with a fair contract and get back to work without this distraction.”

Further Nexus coverage for the strike can be viewed here.

Raises for AFSCME? Looks like tuition will go up to pay for it.

If these people don’t like the conditions of their employment, why don’t they just quit and find a job somewhere else and stop whining?

lets get the caravan over and hire them instead

How sad that some people here are actually incapable of understanding.