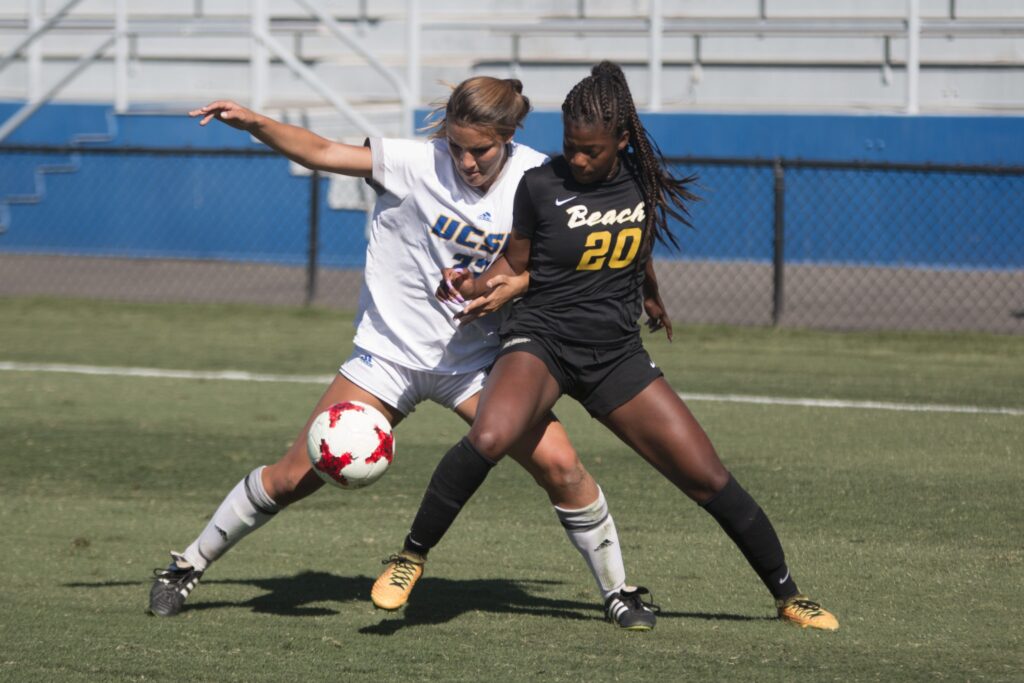 Following the Gaucho’s walk-off strike in the 90th minute against Cal State Fullerton earlier this weekend, UCSB’s Madeline Gibson netted a late goal in the 83rd minute to propel UCSB over Hawaii with a dramatic 1-0 victory.

With the win, the ‘Chos hurdle into the sole third place spot with an 11-6 overall record, 4-2 in conference (12 points). Hawaii will fall into fifth place following the late loss as it drops to 8-6-1 overall, 3-3 in league play (9 points).

“That wasn’t just one step, that was one leap forward,” expressed Head Coach Paul Stumpf following his team’s climactic triumph. “That was a team tied with us in points, so if we end up tied in points, we have the head-to-head for the tie breaker…three massive, massive points if you ask me.”

UCSB commanded the tempo of Sunday’s contest from kick-off as the Gauchos peppered the goal early with six shots on junior keeper Alexis Mata. Mata was put to work quickly after the opening whistle as UCSB maintained possession for the majority of the first half. The Rainbow Wahine struggled to challenge the Gaucho’s attack, and didn’t fire a shot off until the 28th minute.

Hawaii gained steam as the half went on, forcing junior keeper Hannah DeWeese to leap for consecutive saves in the 28th and 29th minutes and keep the game knotted up at zero a piece. After blocking these two shots on goal, DeWeese only had to make one more save which came in the 52nd minute to pick up her seventh win of the season.

“Probably one of the biggest saves of the year,” said Stumpf regarding DeWeese’s stop in the 29th minute. “It’s her job to make one big save a game; tonight she did. Great performance, real pleased.”

The Gauchos often struggle to score in the first half of play as the squad has only two first half goals in six Big West Conference matchups. However, once UCSB gets rolling, this team has plenty of weapons to attack with after making some slight halftime tweaks.

UCSB burst out of the gates in the second half, as Shaelan Murison took two chances on goal within the first 10 minutes. Murison had eight shots in this contest following her late-game heroics on Friday that lifted the Gauchos in the 90th minute for a walk-off 2-1 win.

In the 83rd minute, the ‘Chos finally got the look they had been waiting for as Cate Post lofted a cross into the box for senior midfielder Madeline Gibson who powered home a strike to take the 1-0 lead.

“The work rate that that young lady has, I’m just so happy for her,” beamed Stumpf on what Gibson’s leadership brings to the team. “I love the fact that we’re in control of our own destiny. We have one of the two [final] games at home, and we’re playing at a pretty high level… I just want enough points to get into that tournament for the first time in two years and reward these kids.”

Coach Stumpf had remarked before Big West play that it has historically taken 12 points and 4 wins to secure a berth into the Big West Tournament. Following the 1-0 win on Sunday, the Gauchos have met that goal.