The study, “Smartphone-based pathogen diagnosis in urinary sepsis patients,” can be found in the EbioMedicine journal, and the research was funded by grants from the National Institute of Health’s National Heart, Lung, and Blood Institute.

The smartphone-based, real-time loop-mediated isothermal amplification — or smaRT-LAMP — is a clinically valuable system that can help speed up the diagnostic process for urinary tract infections (UTIs).

“There are 10 million urinary tract infections in the U.S. per year, mostly in women,” Mahan said in an email. To put things into perspective, roughly half of UTIs are properly diagnosed. UTIs can lead to many complications, such as a higher risk of miscarriages in pregnant women.

A significant statistic revealed that half of all women will develop a urinary tract infection in their lifetimes, and UTIs account for 25 percent of all sepsis cases. Sepsis is a life-threatening response to infection and a major cause of death, which emphasizes the importance of proper diagnostic tools.

Although diagnostics influence roughly 70 percent of healthcare spending, only 3-5 percent of these spendings actually fund diagnostics. As a result, the World Health Organization has been encouraging inexpensive and effective diagnostic tools to use in areas with limited resources.

UTIs can be painful if limited to the bladder but deadly if spread to the kidney. These infections are usually treated with antibiotics, in which early stage diagnosis is necessary in the context of antibiotic-resistant and multidrug-resistant pathogens.

“The high cost of current technologies to identify (ID) bacteria in the urine preclude their use in resource-limited settings like local clinics,” said Mahan in an email. “SmaRT-LAMP provides a portable, accurate and low-cost detection system for the medically underserved.”

This reusable kit costs less than $100 to assemble and can produce useful information in one hour, compared to 18-28 hours in a microbiology lab. Upon urine sample collection, clinical microbiology labs have to grow the bacteria in cultures first. In the new and simplified process, the smartphone app will analyze a small amount of the urine sample using the phone’s camera and the diagnostic kit. 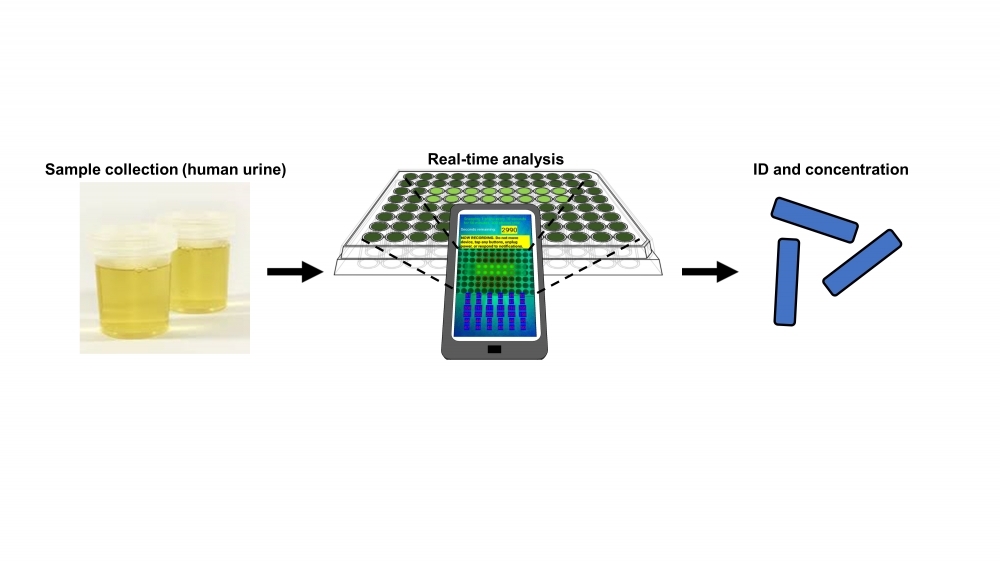 The smartphone app analyzes a small amount of the patient’s urine sample and can detect the pathogen’s I.D. and colony count. The Bacticount app is open-source, free and currently available for Android phones from the Google Play store. / Courtesy Image

“The phone’s camera takes pictures of a fluorescent chemical reaction that detects the presence of bacterial DNA,” Mahan said in an email. “The more fluorescence, the more bacteria.”

The smaRT-LAMP system is based on nucleic acid detection: It amplifies DNA, forming pyrophosphates in the process. This causes turbidity that can be visualized more effectively than with polymerase chain reaction (PCR). SmaRT-LAMP does not require complex equipment or skilled staff, so it is cost- and resource-effective.

The free app is currently made for the Android-based operating system and can be downloaded from the Google Play Store. Mahan said that the immediate focus is to integrate the app into local clinical practice, but he also anticipates adoption by international health organizations.

“In the future, we plan to modify the system to detect bacteria in the blood,” Mahan said in an email. By branching out this procedure to work on a variety of pathogens and patient samples, the smaRT-LAMP system’s clinical versatility will surely speed diagnoses and encourage effective therapies.