The Daily Nexus
News
UCSB Las Maestras Center Holds Protest Against Separation of Families in San Diego
September 20, 2018 at 12:02 am by Sofía Mejías-Pascoe 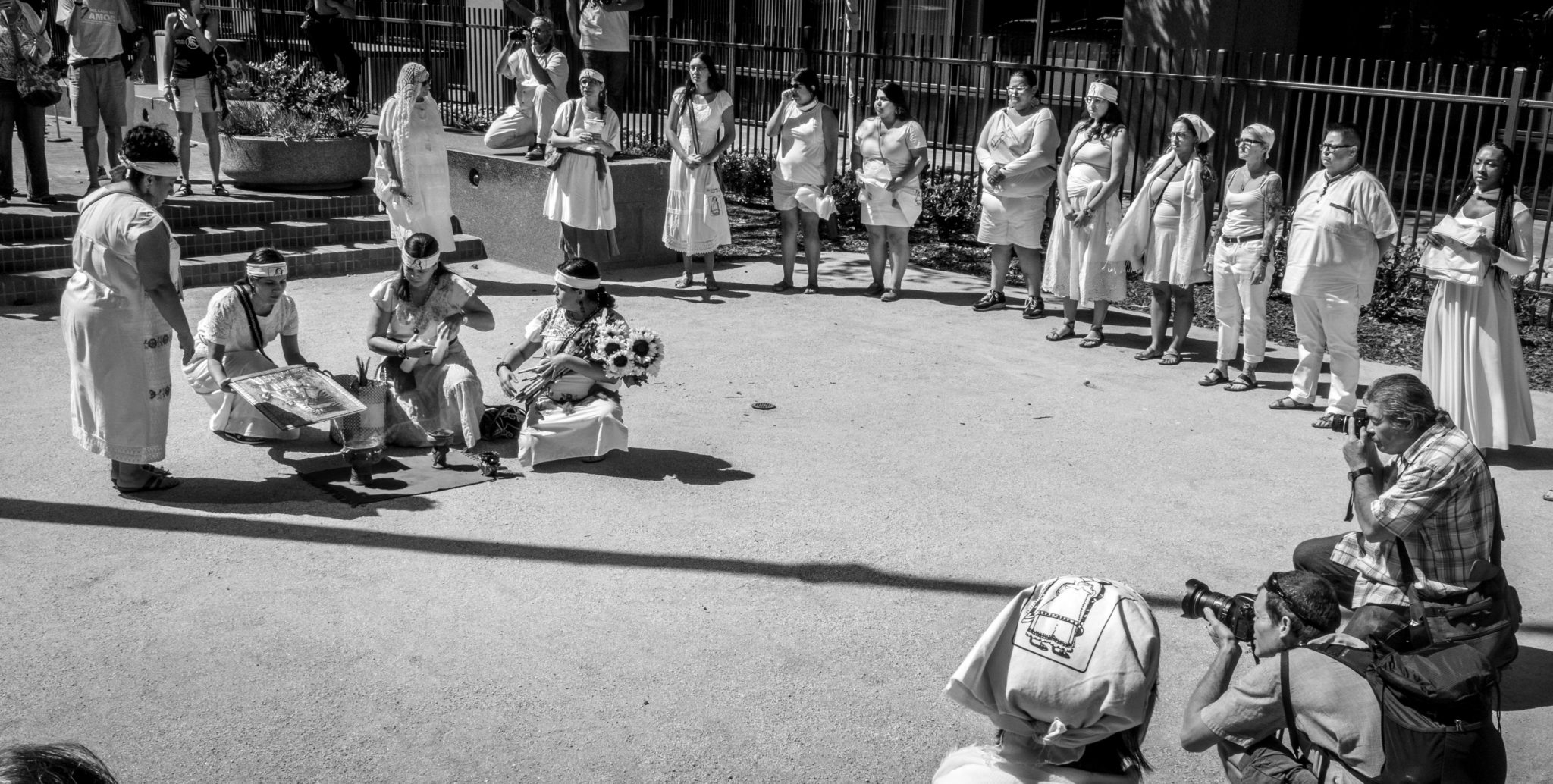 Protestors sang, chanted and cried in resistance to the Trump administration’s “zero tolerance policy” on illegal border crossing, which has resulted in the separation of children from their detained parents.

“Imagine… trying to escape, trying to flee a bad situation and finding yourself in jail with an unlimited amount of time, with no communication from your family. It’s the worst thing that could happen to a human being,” Celia Herrera Rodríguez, co-director of Las Maestras Center, said.

Protestors also stood in support of undocumented immigrants who are currently detained due to the administration’s policies.

The protest took the form of a communal prayer using ceremonies, performances and a mixture of aspects from traditional indigenous cultures, such as the Kumeyaay tribe. The prayer culminated in a collective cry in which protestors weeped and embraced each other.

“It was a community cry. It was us coming together to be able to support [undocumented immigrants], what we’ve been carrying around as a community,” Rodríguez said. 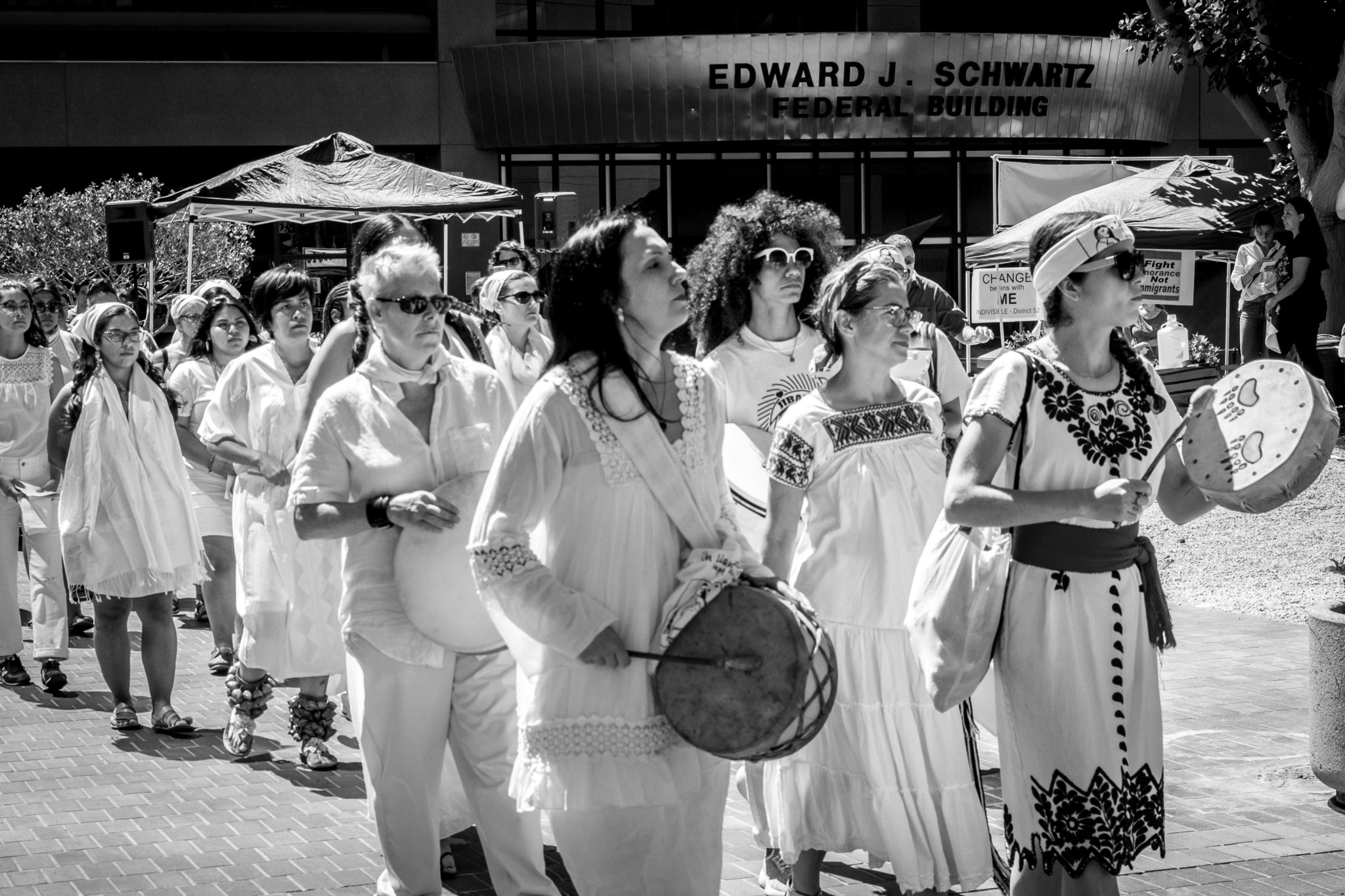 Un Llanto Colectivo echoed sentiments from the original 16th-century version of “La Llorona,” which tells the story of a woman who “cries out in mourning, anticipating the loss of Mexico’s children due to the Spanish invasion,” according to a Un Llanto Colectivo press release.

The internal conflict of La Llorona parallels the state of immigration to the U.S. from south of the border as well as the desire for migration and the risks that come with uprooting one’s life, Rodríguez said.

For this protest, Las Maestras Center collaborated with several national and regional groups that deal with issues of immigration, including Pueblas Sin Fronteras and the National Association of Domestic Workers, among others.

Representatives from these groups spoke during a press conference at the protest,urging the community to take action while also sharing personal anecdotes about immigration.

On the first day of the protest, grey smoke from burning sage and incense filled the air while approximately 30 protestors dressed in white marched around the outside of the Federal Building in downtown San Diego, where the regional U.S. Immigration and Customs Enforcement (I.C.E.) field office is located.

The protest also included a theatrical performance in which participants recited sentiments about the experiences, losses and risks involved with immigration.

The following day, participants repeated the ceremony at the Otay Mesa Detention Center in San Diego, where undocumented immigrants are currently being detained.

Protestors positioned themselves to aim their voices toward detainees of the detention center in hopes they would be heard over the wall separating them. They were eventually able to make contact with two detainees who had access to a cellphone while the protestors were gathered. The groups exchanged greetings and hopeful sentiments.

“They said ‘Thank you.’ Just ‘Thank you’ that we remember them, that we gave them time … that we came,” Rodríguez said.“We said to them, you know, ‘Have faith that there is someone here that thinks about you everyday, if nothing else, that you’re not disappeared.’”

Un Llanto Colectivo is the first major action that Las Maestras Center has organized since its opening in March of this year. The faculty currently consists of Rodríguez, a lecturer on campus, and Cherrie Moraga, a professor in the English Department at UCSB.

The group, which stems from the English Department at UCSB, aims to educate students and preserve the thought, traditions and culture of indigenous communities, according to its website.

“Indigenous thought has been fragmented, punctured, disengaged, decontextualized, made into these little kind of exotic things. [Las] Maestras center wanted to bring [indigenous thought] back into focus,” Rodríguez said.

With initial funding they received from UCSB, Rodríguez hopes to continue to expand Las Maestras through developing programs, hiring interns and developing a voice on campus. In the six months since opening, Las Maestras has already begun to connect with other groups seeking collaborations.

Rodríguez stresses the importance of individuals to stay active in their communities and pay attention to the social and political issues happening around them.

“Unless you stop injustice, it will continue to roll and eventually you’re gonna feel it,” Rodríguez said. “We have to keep vigilant and keep active. I think that’s an important piece of it, you know, because it’s not over.”

A version of this article appeared on p.3 of the Sept. 19 print edition of the Daily Nexus.

I’d like to see a counter-protest that is against illegal border crossing. These people cross the border illegally, knowing that it is illegal when they do it, then complain that the US is not nice to them. Countries like Malaysia and Singapore will cane you for doing this.

Yeah Anonymous… Let’s try to be as good as Malaysia and Singapore when it comes to human rights. I’m sure the signers of the Constitution and Bill of Rights would be proud.

My name is Bob Davis. I did not know the above comment would read, “Anonymous”.

What? There are consequences for breaking federal laws? Well that is completely unfair. Where is my safe place?