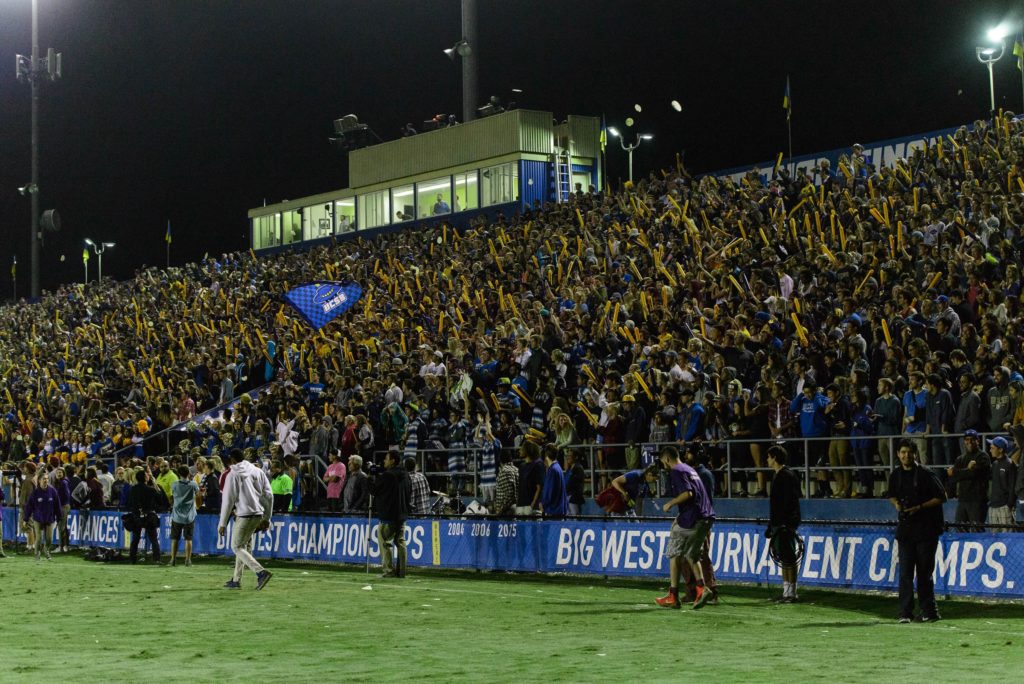 With a solid 4-3 start to non-conference play, the UCSB men’s soccer team is set to take on longtime rival No. 23 UCLA at home on Saturday night. The Gauchos have built up some momentum, recently, with wins over Butler and New Mexico State after a shaky 0-2 trip to the Pacific Northwest.

Although they weren’t able to come away with a win in their last game after a goal in double overtime by No. 17 St. Mary’s, they now will come back to preserve their perfect 3-0 record at home. UCLA has also started the season strong, at one point even reaching No. 11 in the national rankings, but will be trying to avoid dropping consecutive games for the first time this year after a tough 1-2 loss to CSUN.

Even though they are in different conferences, with UCSB playing in the Big West while UCLA competes in the PAC-12, these two teams definitely have a history. This “rivalry” may seem to be lopsided at first glance (UCLA has a 34-5-4 overall record against the Gauchos); however, the big games between these squads have almost all went to the Gauchos. Whether it be UCSB’s 2006 National Championship victory over the Bruins, or their 2-0 win in front of a record-breaking crowd of 15,896 fans in 2010, time and time again it seems that the Gauchos were able to rise to the occasion when it mattered the most.

While the stakes aren’t as high in this year’s matchup, the game coinciding with move-in weekend should bring in huge crowds and give Harder Stadium a postseason feel.

As mentioned before, the Gauchos have been unbeatable at home so far this season. The energy of the UCSB crowd, who have consistently been near the top of the NCAA in attendance, definitely plays a role in energizing this team and the young players leading it.

Sophomore Rodney Michaels earned Preseason All-Big West honors and has lived up to the hype so far, along with stepping up into a leadership role. The forward leads the team and is tied for seventh in the conference with three goals, all while having played in fewer games than six of the players in front of him.

He makes up one-half of the youthful one-two punch that the Gauchos have expiremented with up top, along with freshman Carter Clemmenson, who has been a welcome surprise to start off the season.

Clemmenson has already notched two goals, though only starting in one game, and if his production continues at this pace he could become a starting fixture for the team by the beginning of Big West play. These two, along with first-year goalie Ben Roach, have been able to produce now while still showing signs of potential for years to come, which should be an exciting prospect for any Gaucho fan.

The Bruins also have a freshman standout of their own in midfielder Matt Hundley, who has an incredible stat-line of three goals and three assists through their first six games. Hundley has shown vision and a nose for the ball that even most upperclassmen don’t have and his playmaking has helped open up the UCLA offense in unconventional ways.

The biggest beneficiary of this free-flowing offense has definitely been junior Mohammed Kamara, whose four goals so far are good for second in the Pac-12. Because of  superb playmaking from both the midfield and backline (Erick Holt is tied for most assists on the team with three as a defender), the forward has been able to push up and put more pressure on the defense with great results.

One of the keys to the game for the Gauchos’ defense will have to be controlling the midfield and taking the Bruins out of their comfort zone. In their last game against St. Mary’s, there were too many times where, instead of maintaining possession, the Gauchos opted to boot the ball up the field. Against UCLA, a team that has given up fewer than half of the shots and goals it has taken and scored, opportunities will be few and far between ¾ meaning that UCSB will have to capitalize on anything it can get.

Ultimately, this is going to be an extremely fun game. The influx of new freshman who move in next weekend, combined with the youthful fast-paced style of the teams, should make for plenty of energy and exciting plays. Although the Bruins have had the edge historically, it might be time for a new era of Gauchos to flip the script.