Seafood is a vital source of sustenance for a number of malnourished nations; however, new research shows that global waters are largely dominated by the industrial fishing fleets of wealthy countries, which may be contributing to global food insecurity.

A team of researchers at UC Santa Barbara tracked the patterns of industrial fishing vessels around the globe, and they found a significant disparity between the number of vessels belonging to lower-income and higher-income countries in both national and international waters. Their paper, “Wealthy countries dominate industrial fishing,” appears in the journal Science Advances.

The researchers were able to track fishing vessels using advanced machine-learning technologies that allowed them to analyze large capacities of data.

In their paper, the researchers state, “Describing fishing patterns in comprehensive and quantitative terms, both in national waters and on the high seas, is challenging due to the lack of open access to detailed records on the behavior of fishing vessels. However, advances in machine learning technologies and big data capacity now offer us access to high-resolution fishing vessel activity from 22 billion automatic identification systems (AIS) points, processed by the Global Fishing Watch platform using convolutional neural network models.”

The dominance of wealthier countries in global industrial fishing can be highly detrimental for low-income countries that predominantly rely on seafood for nutritional sustenance. 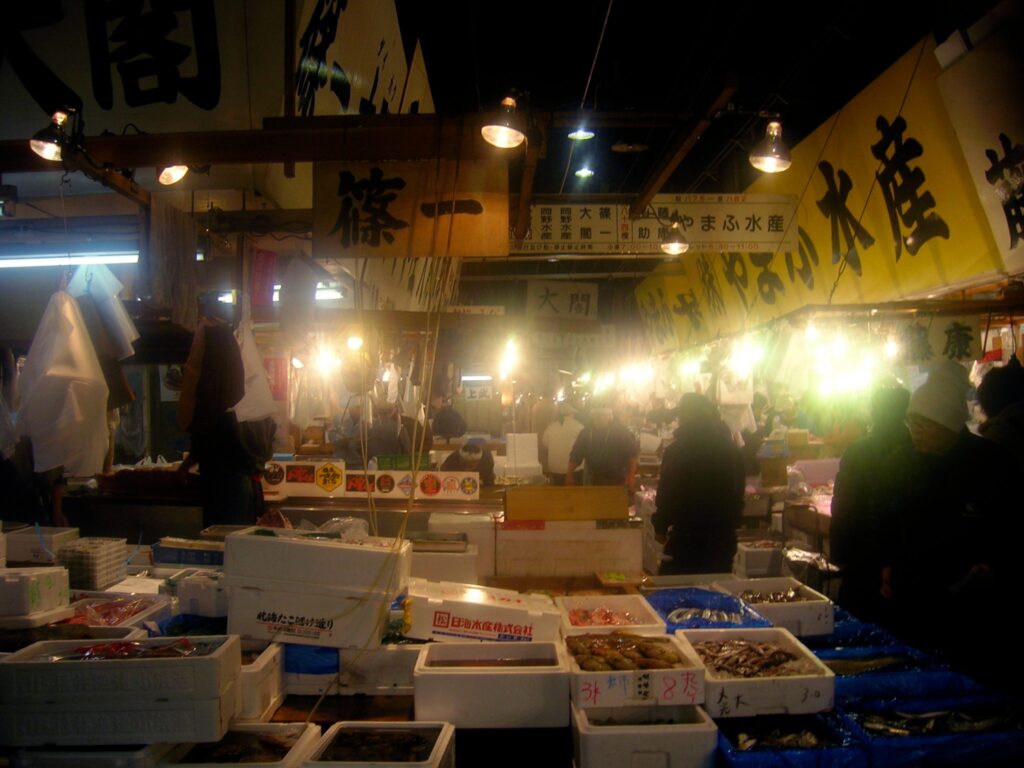 Venders sell their fish at a fish market in Japan, one of the higher-income countries with significant industrial fishing activity. / Courtesy of Wikimedia Commons

According to the researchers, “Guinea, a low-income nation that is heavily reliant nutritionally on seafood, presents an apt example. Approximately 75% of Guinea’s population (an estimated 10.1 million people) may be vulnerable to micronutrient deficiencies in future scenarios with reduced access to seafood, making it one of the most nutritionally vulnerable countries in the world to losses of seafood. In this analysis, we estimate that over 80% of the industrial fishing effort we detected in Guinea’s EEZ came from China, a situation that presents potential challenges.”

The unequal distribution of power on global waters prompts discussions about food sovereignty, or the “rights of local people to control their own food systems.” Scientists who are concerned about this uneven control of marine resources sometimes refer to it as “ocean grabbing” or “marine colonialism,” arguing that wealthy countries unfairly exercise control over the resources of vulnerable, less-wealthy nations.

The research team behind this paper hopes that their findings will influence future policy decisions regarding marine resources. Moreover, they hope to influence a marine biodiversity treaty that it currently being drafted by the United Nations.

The paper states, “Analyzing and communicating patterns of the distribution of fishing effort by different nations on the high seas are especially timely and important given the immediate opportunity to use these data to shape progress toward a United Nations treaty being developed for biodiversity on the high seas.”

The findings of these researchers reveal great inequalities among higher-income and lower-income nations in terms of global industrial fishing, and they may have the power to influence political change that creates more equitable global waters.

>The dominance of wealthier countries in global industrial fishing can be highly detrimental for low-income countries that predominantly rely on seafood for nutritional sustenance.

You make this claim yet provide no evidence to support it. Are you trying to say that the water around low income countries are over-fished to the point that local fisherman can not fish enough to meet the countries needs? How are the fisherman from low-income countries being negatively effected?