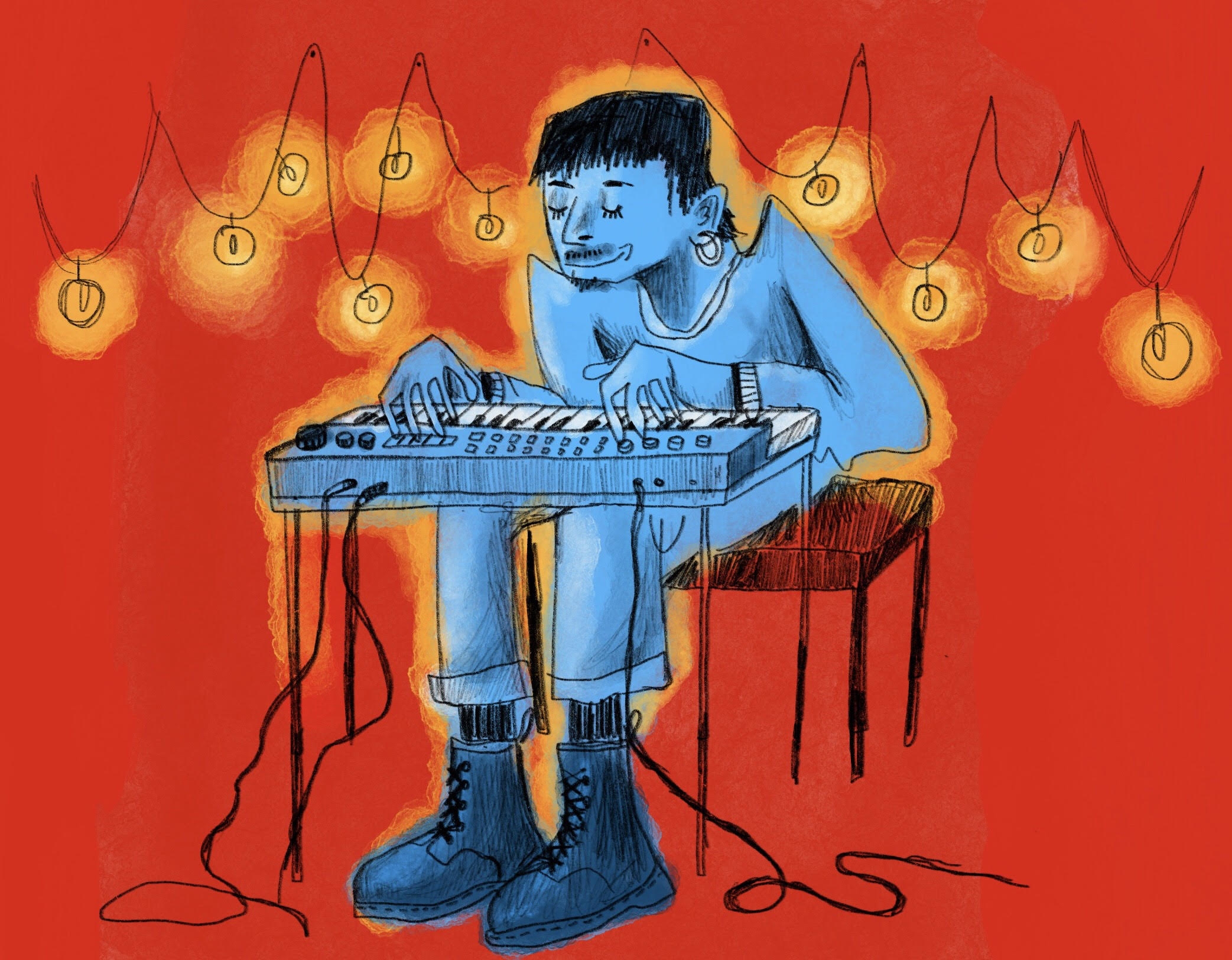 The usual June fog hung over downtown Santa Barbara a few Friday nights ago on the south end of Olive Street. The low, heavy mist reflected the lights of State Street with an orange glow, and kids shuffled around outside the gate of D.I.Y. space Bici Centro between cigarettes and quiet words. The asphalt-covered space behind the gate housed 20 more people chatting among themselves listening to the first soundcheck. It was obvious that most of the people inside knew each other. There was a nervous energy that filled the air as the first band, Little Bitch, took the stage.

The outside crowd began to trickle in as Rose Nadis, lead vocalist of Little Bitch, stood at the mic. Stragglers from the outside crowd, lamenting the five dollars they had to pay in entry, filed through the gate for their stamp and joined the crowd. The band seemed to swell as the show carried on, becoming bolder and obviously having more fun as their friends began to shed the cool-guy affect generally associated with being at a show labeled “D.I.Y.” –– which, of course, stands for “Do It Yourself.”

With whimsical lyrics and a healthy amount of power chords, Little Bitch’s sound falls squarely in-between Neutral Milk Hotel and Beat Happening. It’s easy to see where they are drawing influence from –– and that’s a good thing. As musician Ian Svenonius of National of Ulysses, The Make Out, Escape-ism and countless other projects said to Rolling Stone earlier this year, every good band is essentially a cover band.

The dramatic climax of the set came at the peak of a song called “Pants-less Michael,” during which keyboard player, backup vocalist and band namesake Mikol Bitch (spelling as relayed to me by other band members while Mikol himself was hiding from angry concert-goers) tore off all his clothes and went careening into the crowd of teenagers. Most opted to part themselves instead of engage with the young man until he connected squarely with an unsuspecting friend of a friend, head buried in her phone mid-set. Mikol Bitch’s wiry frame connected with the girl and she subsequently connected with the asphalt. Mikol sprang up unfazed and charged back to the keys for the end of the song as his new friend charged straight out of the gate, learning a valuable lesson in show etiquette that she surely will not forget.

The value of D.I.Y. shows like this is their teachable moments. The bands and audience are all one in learning how to put on a show. While it often feels like the underground has become pop culture in traditionally hip places like Los Angeles or San Francisco, the environment in Santa Barbara feels welcoming. The barrier to entry is relaxed, giving more space and an authentic platform for bands like Little Bitch to figure out how to be a band.

Acts from Santa Barbara help each other. The series of shows this summer at Bici Centro is, in part, organized by Ruben Zarate, the enigmatic frontman of Santa Barbara-based Dante Elephante. With his own band experiencing some success and earning praise for their project Anglo-Saxon Summer, Zarate turned inward and is helping foster a new wave of local groups coming from Santa Barbara’s D.I.Y. scene.

Zarate, along with indie label Last Resort Forever, are helping to fill the void left by the popular D.I.Y. venue FUNZONE’s closing last year. FUNZONE, which occupied the old maintenance shed for the batting cages on Milpas in the back of East Beach Tacos, came alive at night with youthful energy. As Santa Barbara’s only all-ages venue for three years, it was at the heart of the scene. Local kids had a safe, substance-free space where their music was the focus.

For a five-dollar donation, you got a night of music at FUNZONE –– a staple in the lives of those who frequented the spot. Spencer vonHershman, manager of the East Beach Batting Cages where FUNZONE resided, started the venue as an experiment. It quickly became a breeding ground for local talent, with a regular cast including Little Bitch and Cave Babies. With the demise of FUNZONE, the shows at Bici Centro are now vital to the survival of the scene and to the cultivation of talent in the 805 area.

FUNZONE helped teach bands to be good members of the musical community. It’s understood in the underground scene that FUNZONE created a platform for alternative, indie and punk fans alike, and it connected both bands and fans to a sense of place that was once hard to find in an upper-class town with 21-plus venues and large stadium shows.

D.I.Y. venues along with self-organized house shows in Isla Vista provide a space for young alternative and indie bands that did not exist in years prior. Notable acts currently coming out of Santa Barbara, such as Clean Spill, Mellow Grass and The Anti Shiest, have created their own network, organizing shows that gather hundreds of people into Isla Vista backyards a couple nights a week. The big local names draw the crowds that lend exposure to the newer acts on the bill, and the significance of that kind of exposure to a young audience cannot be understated.
The Anti-Shiest is an act formed in Santa Barbara that has been paying their dues locally for the last few years. The boys have earned their spot as resident lords of the Isla Vista backyard scene. No proper I.V. backyard show is proper without them on the bill, and they do a large part in drawing crowds for new and visiting bands alike.

“The [Santa Barbara] scene is fucking rad,” says Sam Deeley, the notoriously shaggy lead vocalist and rhythm guitarist for The Anti Shiest. Often likened to a golden retriever, Deeley plays shows like a hardened veteran with power and a shark-eyed gaze. Through position changes, drunken fumbles and beer-soaked equipment, Deeley along with Mikey Threet and Dan Carrol have been making waves that stretch farther than the 805. “Anyone looking to start up a band needs to lose the hesitation and indecision,” the band agreed.

This sentiment epitomizes what makes Santa Barbara’s D.I.Y. scene so special — people and places like Ruben Zarate, FUNZONE and The Anti Shiest who share a strong sense of community and respect for the people and places that raised them. The D.I.Y. ethos is alive and well in Santa Barbara, California. Ask for help, connect with those who are doing it, and “If they blow you off, then they aren’t a part of our scene.”