The Daily Nexus
News
Coast Carvers Hit the Streets of Isla Vista
August 23, 2018 at 12:02 am by Sofía Mejías-Pascoe

Coast Carvers, a newly formed group of all-female skaters in I.V., took to the streets of Del Playa last Sunday for their first skate session together. 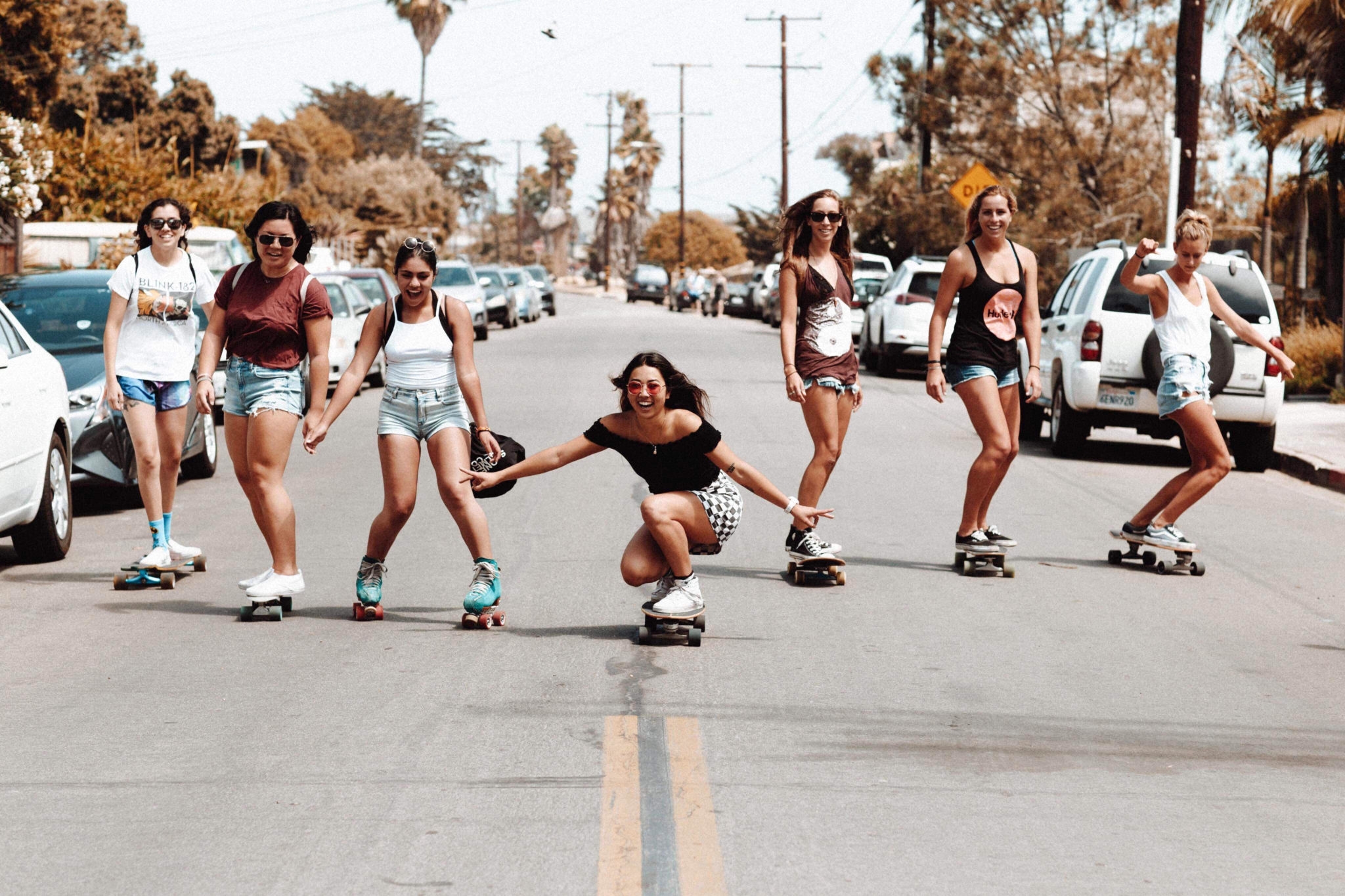 Alaska Yokota, the founder of Coast Carvers, and the nine other girls who attended the session skated through I.V., teaching each other new tricks, showing off their skills at a skate ramp in I.V. and amassing supportive cheers from neighbors and people along the way.

“So many people cheered us on as we were skating too, it was great… Just kind of like ‘Yeah, go girls, go!’” said Yokota, a fourth-year psychology major and art minor at UC Santa Barbara.

The first skate session of Coast Carvers was a huge success for Yokota, who created the group with the hope of bringing together girls locally for skate sessions and creating a space for girls to gain confidence in their skating.

“Being part of… a group of girls that also have the same passion and level of interest as you just makes your love for it grow stronger,” Yokota said. “I think that’s my biggest purpose, is to make girls feel comfortable and confident in what they’re doing that they love.”

Coast Carvers has quickly gained traction among residents in I.V. after Yokota made a post on Facebook to recruit girls in the area to join “a group of girls who shred the streets like you,” as the post reads. Within seconds, Yokota quickly received likes, comments and messages in response to her post.

“For some reason it just blew up like crazy, so quickly, too. The second I posted it, my phone was blowing up with messages and notifications.”

At the time of the Nexus’ interview with Yokota, there were a total of 73 members in the GroupMe for Coast Carvers and approximately 100 people who had contacted Yokota about her post, from newcomers to I.V. to experienced skaters to parents asking Yokota to teach their own kids how to skate. 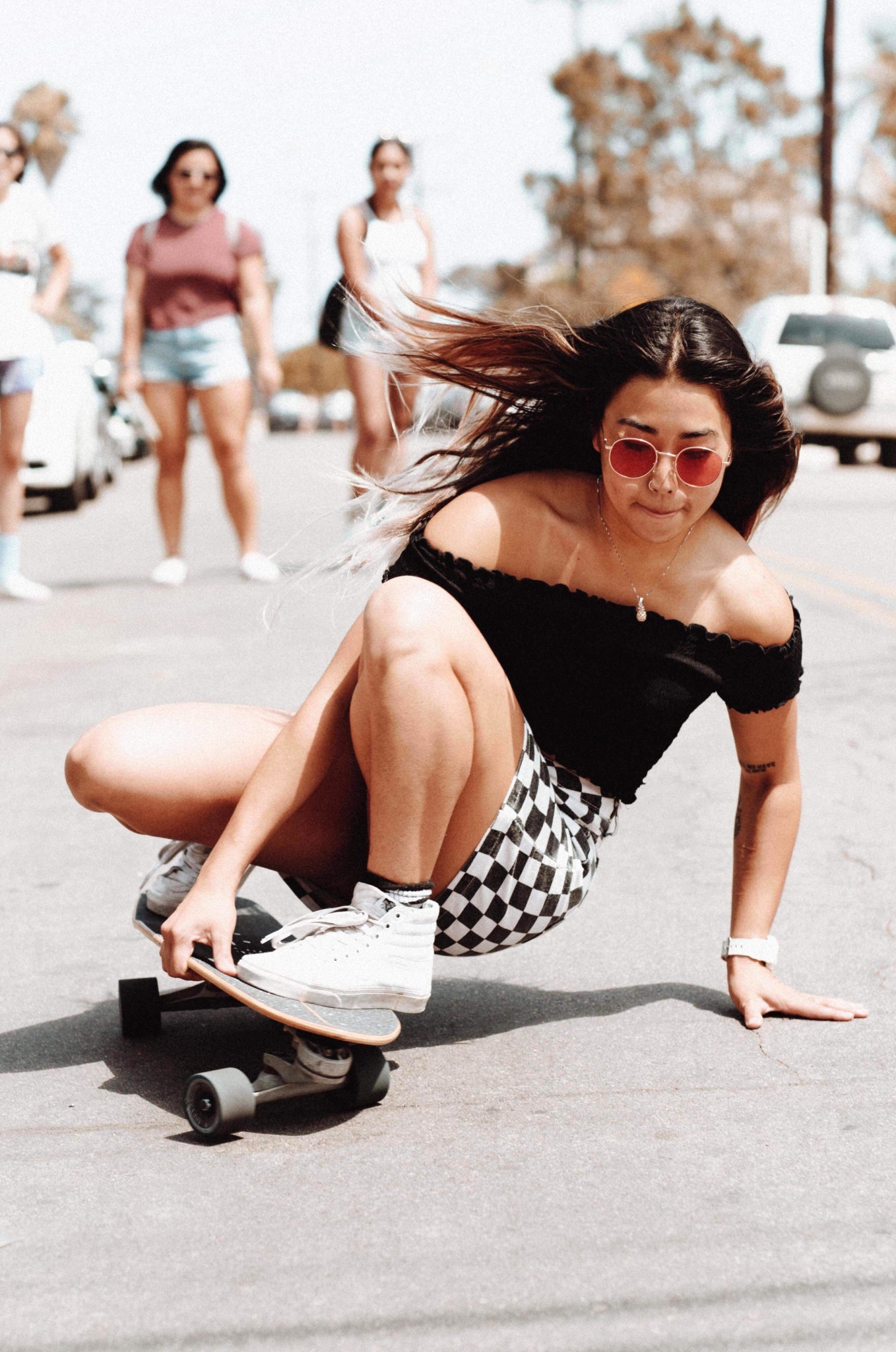 Yokota founded the group after taking interest in a similar female skating group based out of Venice Beach called GRLSWRL, which is “a modern-retro all-female stoke-chasing community focused on bringing femininity… to the male dominated skate scene,” according to the group’s website.

Yokota was never able to attend one of GRLSWRL’s bi-weekly scheduled skate sessions, but from meeting up for casual skate sessions with some of the members, she felt that I.V. would provide the ideal space for a group with similar purposes.
“It’s something that Isla Vista kind of needed, but nobody knew it needed that,” Yokota said.

Although they have similar missions, the two groups hold some key differences, such as Coast Carvers’ inclusion of “anything that shreds in I.V.,” namely roller-skating and surfing in addition to skating. Yokota says this inclusion is ideal for their group given the diversity of sports and hobbies practiced by girls in I.V.

Yokota also notes variations in the general energy and mood of the two skate groups, which she attributes to the differences of the locations that each group call home.

“[In Venice] there’s just a bunch of random people and strangers and it’s really crowded, it’s kind of stressful,” Yokota said. “But then when I skated on DP, it was a Sunday evening and I just had my nine girls with me, and it was just really peaceful honestly.”

Being a girl in the world of skating can prove to be intimidating for many people, she said. The seemingly overwhelming proportion of men to women who skate can make it difficult for women feel confident attending skateparks and the like, but skating in groups like Coast Carvers can afford them a sense of support and companionship, according to Yokota.

“It’s really hard to full-send something when you’re just scared… so having girls around you just kind of builds your confidence,” Yokota said. “I don’t want girls to feel like they can’t do things just because they are girls or because there aren’t enough girls doing something.”

Yokota is hopeful that Coast Carvers will continue to grow once the academic year begins. At that time, she plans to have scheduled skate sessions during the week and wants to eventually create an executive board to help run the club.

Depending on the success of the group in the next year, Yokota has also been toying with the idea of expanding Coast Carvers into a multi-chapter organization in order to create a network of girl skaters both locally and regionally.

“That’s what called out to me, is that I could be a part of something bigger.”