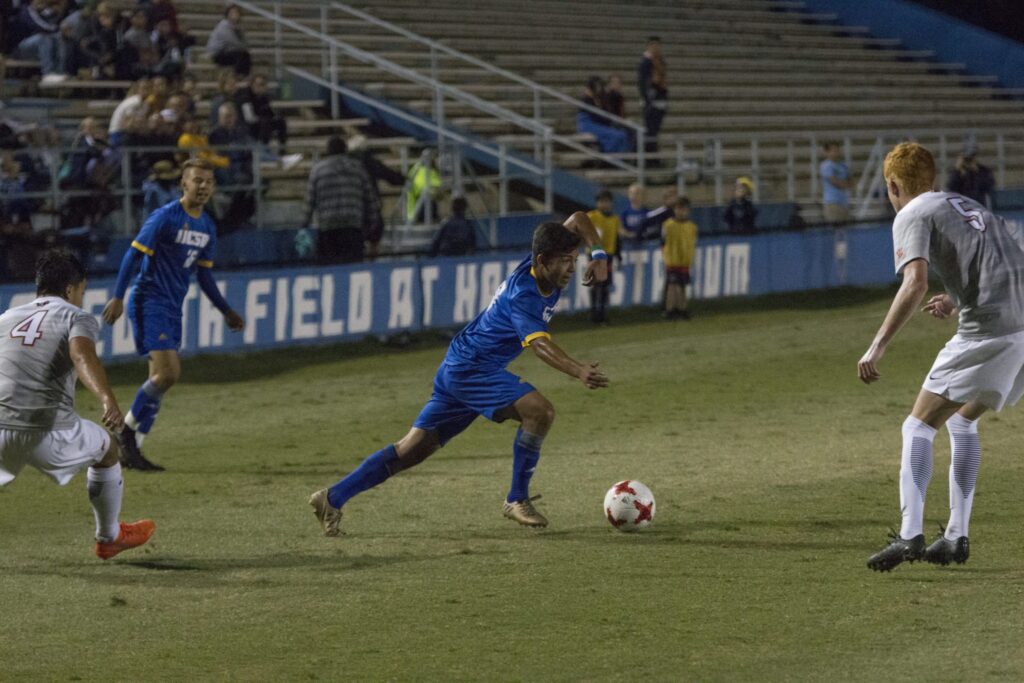 One year ago, the UCSB men’s soccer team was upset by Westmont College 2-1 in their annual exhibition game– a shocking result that gave the Warriors their first win over the Gauchos since 2000, in addition to foreshadowing a down year for Santa Barbara.

On Saturday, Coach Tim Vom Steeg and the Gauchos returned the favor in style, dominating Westmont in all facets of the game en route to a 7-0 blowout victory.

While just an exhibition game, UCSB seamlessly integrated the new members of the squad with its returning players. At the back, Junior transfer Faouzi Taieb–who earlier in the year became only the eighth Gaucho to be on the prestigious MAC Hermann trophy watch list–demonstrated his poise and leadership at center back, making several key tackles and holding the Warriors to only two shots on goal in the entire game.

Despite the absence of Sophomore transfer Carson Vom Steeg, who picked up a knock in training, the rest of the backline easily nullified the Westmont attack and helped the Gauchos maintain a clean sheet. Sophomore transfer Hunter Ashworth smoothy moved into his role alongside Senior Jan Ilskens and Sophomore Adrian Adames, and the four at the back displayed a remarkable amount of chemistry considering their lack of playing time together.

Perhaps most important for the Gauchos was the spark they showed on the attacking end of the pitch– a spark that was too often missing last season, when UCSB only scored 18 goals in 19 matches. Sophomore Rodney Michael once again proved why he was named the Big West Freshman of the year last season, creating havoc on the right side with his pace from the get-go. After leading the Gauchos with four assists last year, Michael picked up right where he left off, assisting on both of the first two goals for Santa Barbara.

A positive sign for Santa Barbara going forward was the obvious connection between Michael, Junior Ignacio Tellechea, and Junior transfer Thibault Candia. Tellechea and Candia both led the Gauchos with four shots, as well as two goals a piece. Despite most of their goals occuring in the six yard box, the positioning of the forwards and their composure in the box suggest that UCSB will pose much more of a threat to opposing defenses this season.

Even off of the bench, Freshman Carter Clemmensen– a highly touted recruit from Arizona– showed why he was named the Arizona Gatorade player of the year, rounding a defender and the ‘keeper in the 30th minute before dishing off to a wide open Candia. Less than two minutes later, Candia returned the favor, taking advantage of a giveaway from Westmont before finding Clemmensen for his first ever goal in blue and gold.

Another great sign for Vom Steeg going forward was the performance from Senior Axel Mendez, an attacking midfielder who won Big West Freshman of the Year in 2014 before leaving the team for the past couple of seasons. In his triumphant return on Saturday, Mendez did not disappoint, consistently beating defenders off of the dribble and tallying a goal for his troubles.

Perhaps the only disappointment on the night for the Gauchos was that very strength on defense. Neither Freshman Goalie Ben Roach or returning Sophomore Alan Carrillo were forced to make any difficult saves on the night, leaving the depth chart murky heading into the first regular season match later this week. The two have been in a heated battle all summer for the starting position, and despite Roach drawing the nominal start, it seems the starter will be decided based on practice this week.

While the Gauchos have many positives to take away–including the Bryant and Sons trophy– Santa Barbara will face much stiffer competition when the Gauchos open up regular season play against St. John’s on Friday. The Red Storm have already picked up two results against teams in the top 25 this preseason, and will prove a formidable challenge to a Gaucho team that has legitimate Big West title aspirations this season.