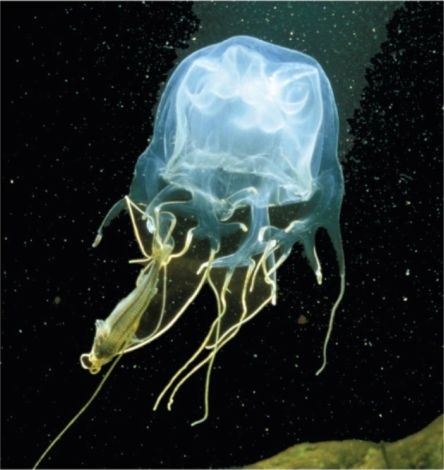 The eyes can convey a great deal of information, and a recent study indicates that this quality applies not only to human visual organs, but also to jellyfish. Researchers at UC Santa Barbara have found that eyes in jellyfish evolved separately from other animals, providing insights about the evolution of these complex organs in simpler animals.

The researchers’ analysis of extensive genetic data revealed that eyes originated at least eight times in cnidarians, and the morphological differences within this group align with each new origin. Their findings are compiled in the paper, “Prolific Origination of Eyes in Cnidaria with Co-option of Non-visual Opsins,” which appears in the scientific journal Current Biology.

Natasha Picciani, a graduate student in UCSB’s Department of Ecology, Evolution and Marine Biology, was the lead author on this paper. According to Picciani, mapping the eye origins in cnidarians required access to an expansive phylogeny that illustrated the vast lineages in the cnidarian tree of life. However, at the time of this research, no such phylogeny existed; therefore, the biologists had to create one.

“We turned to GenBank, which is one of the biggest repositories of DNA sequences that are available,” says Picciani. “We had to select data from everything that was available to build a large phylogeny … so that we could have enough diversity of species to inform us about the eye origins that occured within the group.” She adds that the contributions of undergraduate students at UCSB were instrumental in the analysis of the large data set.

The resulting phylogeny contained 1,102 species and displayed a large diversity of lineages, which allowed the researchers to better understand the relationships between varying eye types and origins in cnidarians.

The phylogeny revealed that different cnidarian eye types have different origins, meaning that they evolved separately and are not part of a single line of evolution. Picciani refers to this as a “surprising find” because prior to her research, these variations in eye type origin were largely unknown.

The findings of this research demonstrate the reach of evolutionary processes, especially those related to convergent evolution, which creates analogous structures that don’t share a common ancestor but have similar forms or functions.

Moving forward, Picciani hopes that the comprehensive phylogeny created by her team will inspire further research into the evolution of eyes in cnidarians.

“Eye evolution in cnidarians has not been very well appreciated,” she says. “The idea that eyes evolved separately has been previously proposed, but it had not been tested with new technologies.”

According to Picciani, cnidarians can be extremely useful in studying the processes of evolution.

“Cnidarians are much simpler than other invertebrates,” notes Picciani. “So they can be a great system for comparison because they are easy to cultivate in the lab. This allows us to study visual systems and evolution of complex traits in a much easier way.”

Picciani believes this paper will allow for more informed comparisons and more specific studies addressing development and gene expression, which will ultimately lead to a greater understanding of evolution.