The Daily Nexus
Sports
C Into the Future: What Lies Ahead for the Boston Celtics
June 21, 2018 at 7:10 pm by Kendra Jackson 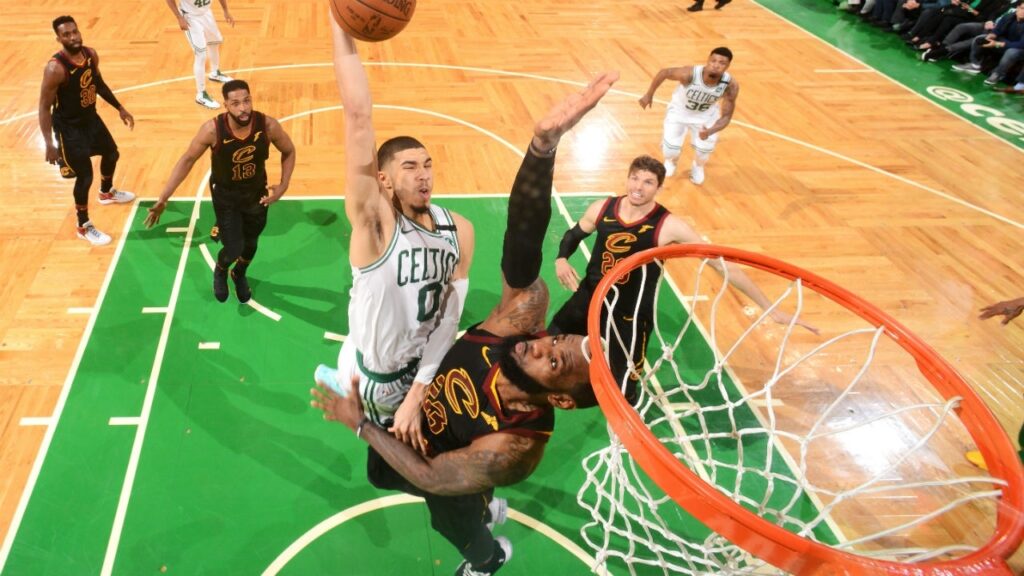 Rookie guard Jayson Tatum posterized a multitude of players this year, including the King himself. (Courtesy of Sporting News)

It was the first game of the NBA season – the Boston Celtics were slated to play against the Cleveland Cavaliers on Cleveland’s home turf. Everyone had high hopes for Boston, as they just acquired two big all-stars in Gordon Hayward and Kyrie Irving.

But in the blink of an eye, about six minutes into the game, Hayward went down with a gruesome left leg injury that would require surgery and render him out of commission for the remainder of the season.

After losing Hayward early in the season and later losing Kyrie Irving, who had surgery to remove prior placed screws in his left patella, the sports world was in awe of what happened next.

Almost no one expected the Celtics to go as far as they did in the playoffs. Taking an explosive Milwaukee team to 7 games, beating a stacked Philly team in just 5, and taking LeBron James and his cradled Cavs to an eventful Eastern Conference Finals game 7.

The Celts saw their season slip through their hands in the last few minutes of that game 7, when LeBron took over and the team couldn’t hit a shot to save their lives.

But despite coming up short in the 2017-2018 season, what lies ahead of this Boston team is perhaps a brighter future than any other franchise in the NBA.

The Celtics will be legitimate title contenders for years to come, and here’s why…

Not only do the Celtics have a General Manger mastermind in Danny Ainge (trading the number one pick to obtain Jayson Tatum and a subsequent first rounder?! Amazing!). But they also have the second coming of Greg Popovich in coach Brad Stevens, they’re loaded with young talent, and since acquiring Hayward and Irving, they are no doubt an enticing location for any free agent serious about winning some hardware.

In order to fully understand the firepower of Boston, it is quintessential to look at the antecedent state of their roster in which they ended their season, understand just what the Celtics have to look forward to in their future draft picks, and take note of what they will look like come training camp when No.11 and No. 20 suit-up once again.

In terms of their draft picks, let’s take a look at what the Green Machine has in their arsenal:

It is clear that the Celts have more than a couple draft picks up their sleeve. It cannot be ignored though, that draft picks are only as good as the players the franchise chooses to pick up. But given Boston’s track record of successful drafting, that doesn’t seem to be something the C’s are too worried about.

Boston’s current roster impressed many, by getting within one game of the NBA Finals without their two all-stars.

You would have been a fool to think an offensive powerhouse like Tatum would’ve been anything less than effective this past season. After all, he did come from Duke. However, not many foresaw him developing as much as he did as fast as he did.

With Hayward going down, it forced Tatum to step up and grow into the force he is inevitably becoming before our very eyes. He effectively plays both ends of the court, and even got a highlight-worthy dunk on LeBron James late in his rookie season.

20-year old Tatum may not be able to get into a bar just yet, but he’s already got into the hearts of every Celtic fan around the world. Tatum is just a piece of the puzzle that makes up the future of the C’s franchise.

Boston is extremely versatile, and their roster is loaded with pieces that just “fit”. You’ve got players from the veteran Al Horford, who is a critical piece of the Celtics’ frontcourt and leadership, to the young and explosive dunk-machine Jaylen Brown who is also a force on defense.

You’d be remiss not to consider Marcus Morris, Aron Baynes, Marcus Smart, and the other competitors that played a big role in the Celts’ great playoff run. But you can contend that a few of those pieces are somewhat disposable if you’re owner Wyc Grousbeck and GM Danny Ainge and are looking to acquire other players.

Rumor has it that the Celtics may be considering trading Brown and some picks to move up in the draft to gain a shot at big Center Mo Bamba from the University of Texas. But if you know anything about Ainge, these rumors can possibly prove to be nothing but smoke and mirrors, especially since the C’s didn’t trade down in the draft last year until the very last possible second and shocked the world by trading for the third overall pick.

Brad Stevens has a coaching system that mimics the great Bill Belichick’s, and that became abundantly evident this past season.

The “next man up” approach the Celtics have adapted is similar to what the New England Patriots refer to as “Do Your Job”, meaning that every player on the roster needs to be ready to come to play, no matter the game or the week.

Stevens was such a big influence and genius play-caller with the young injury-induced roster he had this past season, so one can only imagine what his greatness can achieve in several years to come with a fully healthy roster.

Looking at the final minutes of the ECF game 7, and the struggles Boston had scoring, it is evident that Kyrie Irving and Gordon Hayward are much needed and will have a huge impact once healthy and can push this already good team to become a great one.

One can’t know for sure, but if those two all-stars were on the roster, some say we would have been watching a very different NBA Finals right now instead of watching Steph Curry and Klay Thompson run circles around JR Smith and Tristan Kardashian (I had to).

When you consider the current pieces they have, the pending state of the team when Hayward and Irving come back, and the vast amount of picks the Celts have at their disposal, you can easily proclaim that Boston clearly has the best “process” around. And that process didn’t even involve tanking (looking at you, Philly).

With LeBron’s future in Cleveland hanging in the balance, you could attest that Boston and Philadelphia might be the best two teams in the East starting next season. But even if LeBron does stay in the East, he definitely won’t have an automatic bid to the Finals like he’s had these past 8 years. These ain’t your mommas Boston Celtics, folks. This team is for real.

The Celtics are set up to win for years to come.

On second thought, the last person to make that prognostication ended up getting that amount of NBA Finals losses instead of titles.

Boston has a bright future ahead of them, they can let their upcoming success speak for itself.