The Daily Nexus
Sports
Warriors Vs. Cavs Part IV: Starters, X-Factors
May 31, 2018 at 5:10 am by Jake Ciccone and Andrew Bishop 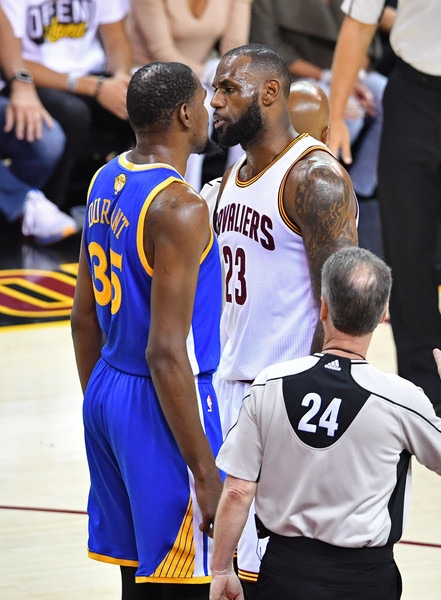 Conversations about the Warriors are always dominated by talk of their four All-Stars, but their fifth man and final piece to their death lineup has been invaluable to their success as a team this year and in years past. Iguodala provides defensive versatility to the Warriors starting five, which allows them to throw different looks at LeBron James throughout the series, which could give him problems. However, Iguodala’s veteran leadership might be the most important thing he adds to Golden State.

He acts like a second coach on the floor by instructing players on where to go and calming everyone down when they start getting too loose with the ball. The versatility he provides is also apparent on offense, where he can play a point-forward role with the second unit or the starters, allowing the numerous great shooters on their squad to run off screens and find their shot. Iguodala has been ruled out for Game 1 and he will be reevaluated before Game 2, so the Warriors will have to make it work with Kevon Looney or Jordan Bell in his place for now. But if he is able to get back on the floor, even if he isn’t fully healthy, his effect on his team cannot be understated.

It’s weird to say that an All-Star can be considered an X-Factor to his team, but Kevin Love has been up-and-down throughout the playoffs and he was injured for basically each of the last two games the Cavs played against Boston. Love is still in concussion protocol and his status for Game 1 is uncertain, but if he can get back on the floor and contribute, that opens up a lot of opportunities for his team.

His best performances in the playoffs came against the Raptors, where he averaged 20.5 points for the series and was clearly playing his most confident basketball. More importantly, when Love was an offensive threat that commanded attention, the other role players on Cleveland were able to find their groove and start producing. If Love can channel his play from the Raptors series and stay healthy, he will take some of the load off of LeBron, and the Cavs might just be able to catch the Warriors off guard and give them a challenge.

Sizing Up Each Squad’s Starting Line-Up

While both the Cleveland Cavaliers and the Golden State Warriors feature impressive depth amongst their bench players, this upcoming NBA Finals matchup will be centered around both teams’ formidable starting lineups. Of the 10 players who will be on the court when the Finals kicks off this Wednesday, six made appearances in this year’s all-star game, with the Cavaliers’ LeBron James and the Warriors’ Stephen Curry serving as captains of the East and West all-star teams respectively. While this will be the fourth consecutive finals meeting for the Warriors and the Cavs, the position matchups have changed significantly since last season. Let’s break down each of the starting lineups and who they will be facing this year.

Filling out the point guard position for the Cavs will be seasoned veteran George Hill, who is renowned for his three-point shooting abilities. Hill’s shot has fallen off slightly since the start of the postseason, and he will likely have a tough time competing with the Warriors’ Stephen Curry, one of the league’s most heralded point guards and three-point shooters. Curry’s ability to quickly come off screens and drain deep shots will likely put Hill in a tough spot throughout the series, and his PPG average throughout the postseason (24.8) dwarfs Hill’s (9.7).

The two guard position will likely favor the Warriors as well, with all-star Klay Thompson facing the Cavs’ veteran J.R. Smith. Like Hill, Smith makes his living behind the arc, leaving more room for LeBron James to do his thing. Smith has shot 36.8 percent on three point attempts this season, and he is known to catch fire when it counts, hitting multiple shots that helped the Cavs capture a Finals victory in 2016. However, Smith will be forced to contend with Klay Thompson, who has been hot this postseason, notching 20.5 PPG and shooting 42.6 percent from three. Thompson is one of the purest shooters in the league, and the Warriors’ offensive system will likely get him multiple open looks, regardless of how hard J.R. plays up on him. While Thompson has a tendency to fall off in big games, if he’s left open, he’s practically automatic.

The small forward matchup will be the one to watch throughout the series. The Warriors will ante up with their star player, Kevin Durant, who has dominated the playoffs with his precise shooting, notching 29.0 [[ok]] PPG. Durant has proved to be a challenge to opponents on both sides of the ball, but he is slightly outmatched by his counterpart on the Cavaliers. LeBron James is arguably the best player of all time, and while Kevin Durant can sometimes hang with him, there is no way to completely shut him down. LeBron almost single-handedly carried the Cavs throughout the postseason, averaging an astonishing 34.0 PPG, 9.2 rebounds, and 8.8 assists. LeBron does it all, and if teams attempt to double him, he has other shooters on the perimeter to back him up. He is a force to be reckoned with, and he certainly has the upper hand in this matchup.

Both teams feature small forwards at the four position, with the Warriors starting Kevon Looney, and the Cavs starting Jeff Green in place of the injured Kevin Love. Looney has not done a whole lot during the playoffs, with about 4.5 PPG and 4.9 rebounds, and is mostly just filling in due to injuries. He will likely be outmatched by Green, whose point production helped LeBron get an edge over the Boston Celtics in the last two games of the Eastern Conference Finals. Green has averaged only about 8.3 PPG this postseason, but if he can turn it up during the Finals, he could prove to be even more of an asset to Cleveland.

Golden State and Cleveland fill their five spots with power forwards, operating under more of a “small ball” system. Cleveland’s Tristan Thompson has not lived up to his extensive salary, especially during the playoffs, with a quiet 6.1 PPG and 6.1 rebounds. He will face off against the Warriors’ all-star, Draymond Green, who has been nothing short of studly when it comes to crashing boards, notching 11.6 rebounds per game. Green averages about 11.1 PPG, and while his three point shot has fallen off since the Warriors’ last finals appearance, he is still deadly from just about anywhere on the court.