The Daily Nexus
News
UCSB Professor Leads Summer Course for Incarcerated Teens
May 31, 2018 at 12:03 am by Katie Wolf

UC Santa Barbara Theater and Dance Professor Michael Morgan’s program The Odyssey Project, which aims to rehabilitate incarcerated teenagers in Santa Barbara, will run for the eighth time this summer. 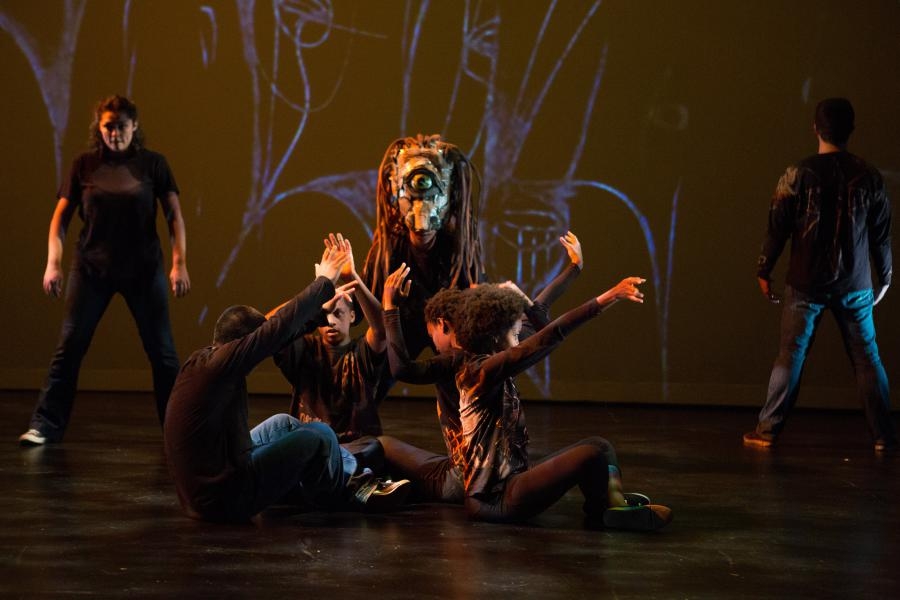 The students and incarcerated teenagers that participate in this program write stories about the struggles they currently deal with. They also draw pictures that convey their emotions in a healthy and metaphorical way, Morgan said. Courtesy of Michael Morgan

The class spends six weeks rehearsing their own rendition of Homer’s Odyssey from June 25 to August 4. At the end of the course, participants perform at Center Stage Theater in downtown Santa Barbara, according to Morgan.

The program grew out of a class called “The People’s Voice,” which is also taught by Morgan and is offered during Summer Session A.

“The purpose of the class was to create a partnership between UCSB undergraduates and the community,” Morgan said. “It’s theater with a social justice bent.”

The class is six weeks long and meets Tuesday through Thursday for about four hours each day, according to Morgan.

This program, which is the first and only of its kind, was started in 2011 when Morgan was looking for a way to bridge the gap between “privileged” and “non-privileged” people in the community.

He said he wanted to create a space where they could interact in a way that promoted deeper communication and understanding between both sides, which is the basis for The Odyssey Project.

“Coming from … my own background, I understand some of the difficulties people have to face if they’re not always privileged,” Morgan said.

Morgan, who has been a lecturer at UCSB since1992, said he chose to focus on The Odyssey for his program because he felt it had a storyline that both students and troubled teens could relate to.

“They become the heroes and heroines in their journey home to Ithaca,” he said.

The students and incarcerated teenagers that participate in this program write stories about the struggles they currently deal with. They also draw pictures that convey their emotions in a healthy and metaphorical way, Morgan said.

Morgan is the primary professor of the course, but also gets help from a mime teacher, mask maker, hip-hop choreographer, rap artist and costume designer.

The location of the class alternates between UCSB and LPBC, which is located in Los Padres National Forest. This allows UCSB students to receive more context about the world and what the life of an incarcerated teenager is like, Morgan said.

“There’s this location exchange, but also there’s a kind of cultural exchange because we have … the free and the incarcerated in a dialogue,” he explained. “The UC students benefit from [the program] because … [the teens and students] start to bond with each other.”

Youth who are admitted into LPBC stay there for either 120 or 180 days, according to the LPBC website.

“The goal of LPBC is to return youth to the community as responsible and productive members of society,” the website states.

Boys between the ages of 14 and 18 are admitted into LPBC and are expected to attend the camp’s school while they are there, according to the website.

Morgan said one of his main hopes is that the theater program will inspire teens who graduate from LPBC to go to college afterwards.

“I usually take youth age 16 to 17. It’s an important transition in their life because … if they continue to violate [the law] basically they go to adult prisons,” Morgan said.

There have been numerous accounts in which incarcerated teens work toward getting into college after completing the The Odyssey Project, according to Morgan.

“[This program] show[ed] me that we could mature ourselves. We could work, not be lazy. We can go to college, have a good job and get good money instead of being on the streets and selling drugs. That’s not going to get you anywhere,” said Diego, a youth who attended the program in 2015.

Morgan said he believes the performance the students and teenagers put on at the end of the course encourages community members and political leaders in Santa Barbara to address these teenagers in a more compassionate way.

Relatives and friends of the actors, as well as community groups and leaders, attend this typically sold-out show, according to Morgan.

The people in the crowd can “really make a difference” in the lives of the teenagers who perform, Morgan said.

“Once [the students and teenagers] do that show… they’re throwing a ball to the public saying … ‘They also need to step up to us, we’re a part of that society,’” he said.

This year, Morgan expanded this project to a maximum security correctional facility in Ventura County. The men at this facility range in age from 17 to 22. Due to safety concerns, the practices and performance are held within the correctional grounds.

This “abbreviated” version of the program is four weeks long and is currently underway, according to Morgan.

The biggest challenge in organizing the class and performance is “getting the word out” and getting students from UCSB to participate in this kind of work, according to Morgan.

Morgan has begun to write up a “training manual” for this course that includes the strategies employed so that other people can start similar programs as well. He is also producing a documentary to spread awareness about the project.

The possibility of continuation for the project will be determined in following years by enrollment numbers, funding and the amount of help from other staff members, according to Morgan.

The next performance of The Odyssey Project at the Ventura location is scheduled for June 8.

A version of the article appeared on p.4 of the May 31 print edition of the Daily Nexus.