The Daily Nexus
News
Backpacks Memorialize Victims of Mass School Shootings Across U.S.
May 24, 2018 at 12:05 am by Sofía Mejías-Pascoe

Four years after the UC Santa Barbara and Isla Vista community lost six of its members on May 23, 2014, the community continues to honor their lives and remind its members of the importance of healing and coping with trauma and loss. 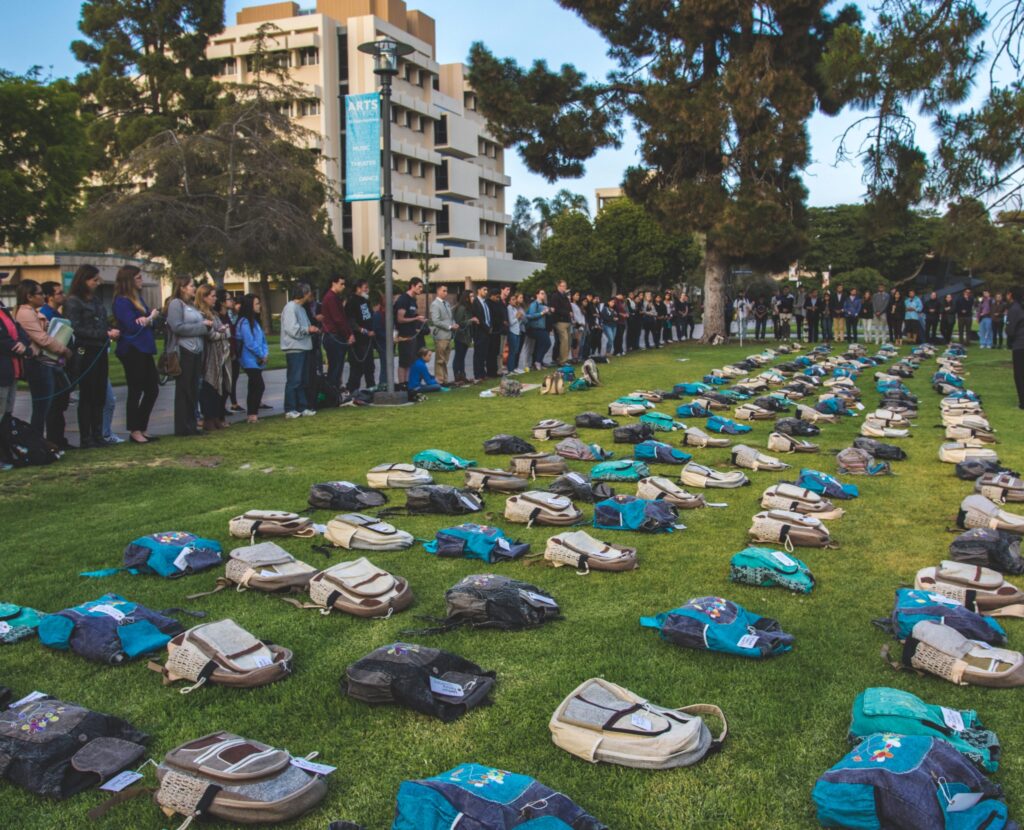 Each of the backpacks on Storke Lawn represented a victim of a school shooting that occurred in the U.S., going as far back as the Columbine shooting in 1999. Angelica Banks / Daily Nexus

Over 200 people gathered at Storke Tower to reflect on the lives of George Chen, Katherine Cooper, Cheng Yuan “James” Hong, Christopher Michaels-Martinez, Weihan “David” Wang and Veronika Weiss, the six who passed away in a mass murder that left another 14 injured.

The memorial began with a set of songs performed on the cello while students and community members gathered around 184 backpacks, each of which represented a student who died in the 1999 Columbine shooting and in every school shooting since the 2007 Virginia Tech shooting.

Each backpack had a tag labeling the name of the student who died and the school they attended at the time of their death. One of the backpacks represented a UCSB student who recently passed away.

Richard Martinez — the father of Christopher Michaels-Martinez — has been a vocal advocate for gun control since the death of his son.

“From the day Chris was killed I’ve been speaking out against gun violence. I was so angry and so frustrated with the way things were and the pointlessness of having to lose a child in this way,” Martinez said.

“I’m completely devoted to trying to make this change. It’s the only thing that’s important to me,” he added.

While Martinez and others spoke to the crowd, participants gathered and held a blue string that connected everyone present.

Organizers handed out artificial candles for participants to hold during the memorial. Blunite, an organization created following the shooting, initially began the tradition of handing out blue L.E.D. lights during the 2015 memorial for the shooting.

Artificial blue candles similar to the ones used during this memorial have also been used by students during several other memorials that have been held on campus.

Briana Michael, one of the leaders of Blunite, also spoke at the memorial. Michael curated the memorial and worked with other collaborators to plan the event.

Michael, who was a first-year student at UCSB when the 2014 shooting occurred, spoke about how she had been personally affected by gun violence.

“We as educated youth need to push to do more. Way more than saying something on Facebook or tweet something. There needs to be more,” Michael said.

Campus and community events on both Monday and Tuesday focused on spreading awareness about the tragedy in I.V. and taking action for gun control. The event series was titled “#Enough.”

On Monday, organizers tabled and set up an interactive art piece in the Arbor. On Tuesday, organizers led “Coffee and Calls” to urge legislators to show support for gun control.

At the memorial’s end, Michael asked participants to place their candles near a backpack and say the name of the school written on the tag.

In an interview with the Nexus after the memorial, Martinez encouraged people to walk away from the memorial knowing they could take action against gun violence.

“Vote, volunteer, contribute,” Martinez said. “Don’t let it stand the way it is. It doesn’t have to be like this.”

A version of this article appeared on p.5 of the May 24 print edition of the Daily Nexus.

Six bright and promising young people perished 4 years ago. Take a moment and imagine the lives they would have had and the voids now in the lives of their families and friends.