The Daily Nexus
Sports
Season in the Books: Gauchos Score Four Players on All-Big West Conference Teams
May 23, 2018 at 5:05 am by Max Kelton 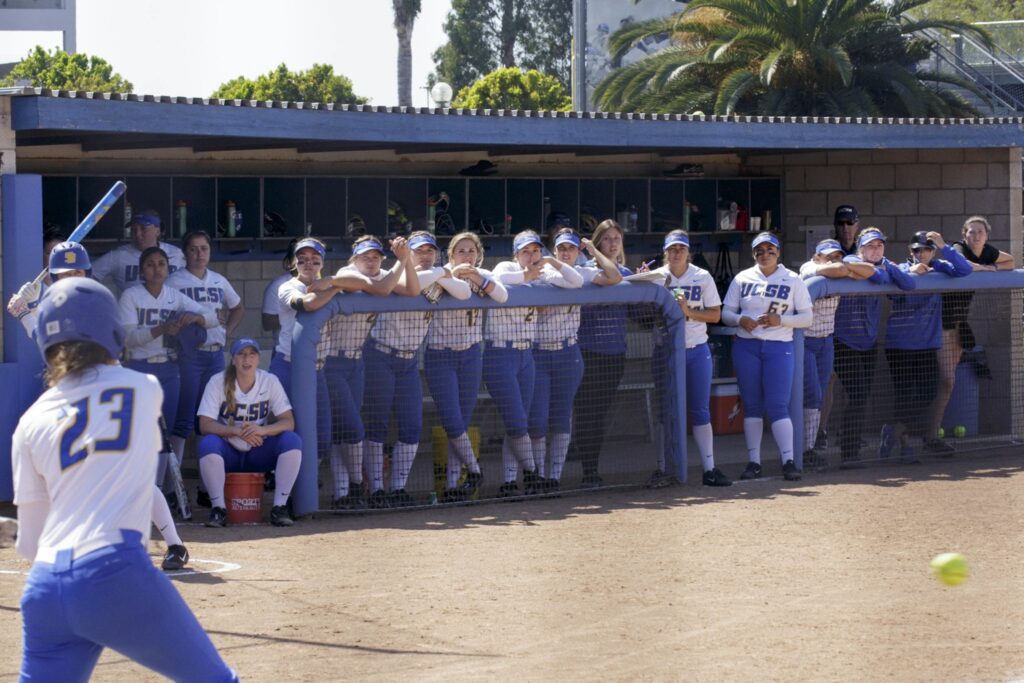 As the 2017-2018 chapter of UCSB softball came to a close with a series win against Blue-Green rival Cal Poly, the Gauchos improved to a 20-win, 34-loss overall record to finish off the season in eighth place in the Big West Conference.

Although the lackluster year brought more adversity than prosperity, UCSB scored a resounding four players who were named to All-Conference teams. Not only did the fantastic four receive recognition for an outstanding season, but each of them plans to return next year while 2 of which are merely culminating their freshman season.

Junior second base clean-up hitter Sierra Altmeyer and sophomore first base facilitator Alyssa Diaz both received second team All-Big West honors, but this was not the first time either player has earned recognition of this caliber.

Altmeyer earns her third honor as an all-league player as the veteran slapped .323 in her junior frame and hit 5 of her 8 team-leading bombs while comfortable in her own ballpark during games in Santa Barbara.

She drove in 31 RBIs and was crucial during wins this season in which she hit .382. Her nearly 40% batting average over wins is a full ten percent higher than her .278 batting average during losses.

Much of the success that Altmeyer had at the plate this year came on the back of fellow infielder Alyssa Diaz who hit in the three spot all year right in front of her complimentary second baseman. Pitchers struggled with Altmeyer in the clean-up because Diaz has such a staunch reputation for getting on base, thus giving Altmeyer so many opportunities to drive in runs.

While the first baseman Diaz played in all but the final seven games of the season, she assumed a premier leadership role on the team in just her second year as she slashed .325 on the year and turned it on during conference play to improve her average to .357 against Big West foes.

All five of Diaz’s home runs came during the non-conference half of the season and nearly 78% of her RBIs were against out-of-conference competitors. Nonetheless, the second-year standout was named to the all-conference second team for the second consecutive year.

Much like Diaz, we saw an influx of outstanding contact hitting from freshman infielder Maci Fines during conference play. The first year began her breakout season at third base but shifted over to the shortstop spot toward the end of the year as sophomore third baseman Kayla Krantz returned from an ankle injury.

Fines was awarded All-Freshman team honors for the Big West Conference considering her all-star worthy .380 batting average during Big West competition in 2018. Fines ability to read the ball well lead her to the least number of strikeouts between active batters on the UCSB roster as she only got rung up 9 times this season.

Her batting average and aggressiveness gradually increased as she became more comfortable at the plate in the latter half of the season.

While Fines hit .231 and .217 respectively in the first of the season, she bettered her batting to .350 in April en route to shining from an outstanding performance in May in which she smacked .458 over a 6-game stretch. In fact, Fines took a six-game hitting streak into the final match against Cal Poly while four of those six games resulted in multi-hit contests for the first year.

Last, but not least, freshman left fielder Sammy Fabian rounds off the list of Gauchos with All-Big West honors as she too earned a spot on the Freshman All-Conference team. Fabian was the sunshine on this team’s season-long cloudy day that was unfortunately covered up by a plethora of other struggles going on with the Gauchos this year.

Fabian began her career with UCSB this season batting .433 through the first 12 games. She led her fellow ‘Chos in batting average for the majority of the season finishing with a team-high mark of .335 for the year.

While the three other players that earned honors were the most appealing during Big West play, Fabian boasted early and dominated during non-conference play. The freshman flashed a .356 average to start off the year and notched her way up to fourth in the Big West in steals with 9.

Yet, when it came to conference competition, Fabian wasn’t nearly as effective. She walked less and struck out more, but what might have hindered her the most was the team’s failure to give Fabian the green light on the base path.

With the resounding speed and aggressiveness she displayed during the former half of the season, it was surprising how she didn’t steal one single base during conference play. Worst of all though, Fabian was never given the chance on the base path during Big West play. She was signaled to steal zero times after an impeccable first half of her season she spent running all over catchers.

With only three seniors graduating this year, the Gauchos plan to bring back virtually the whole team in the 2018-2019 season and get a taste of redemption after struggling to win only a third of their games this season.