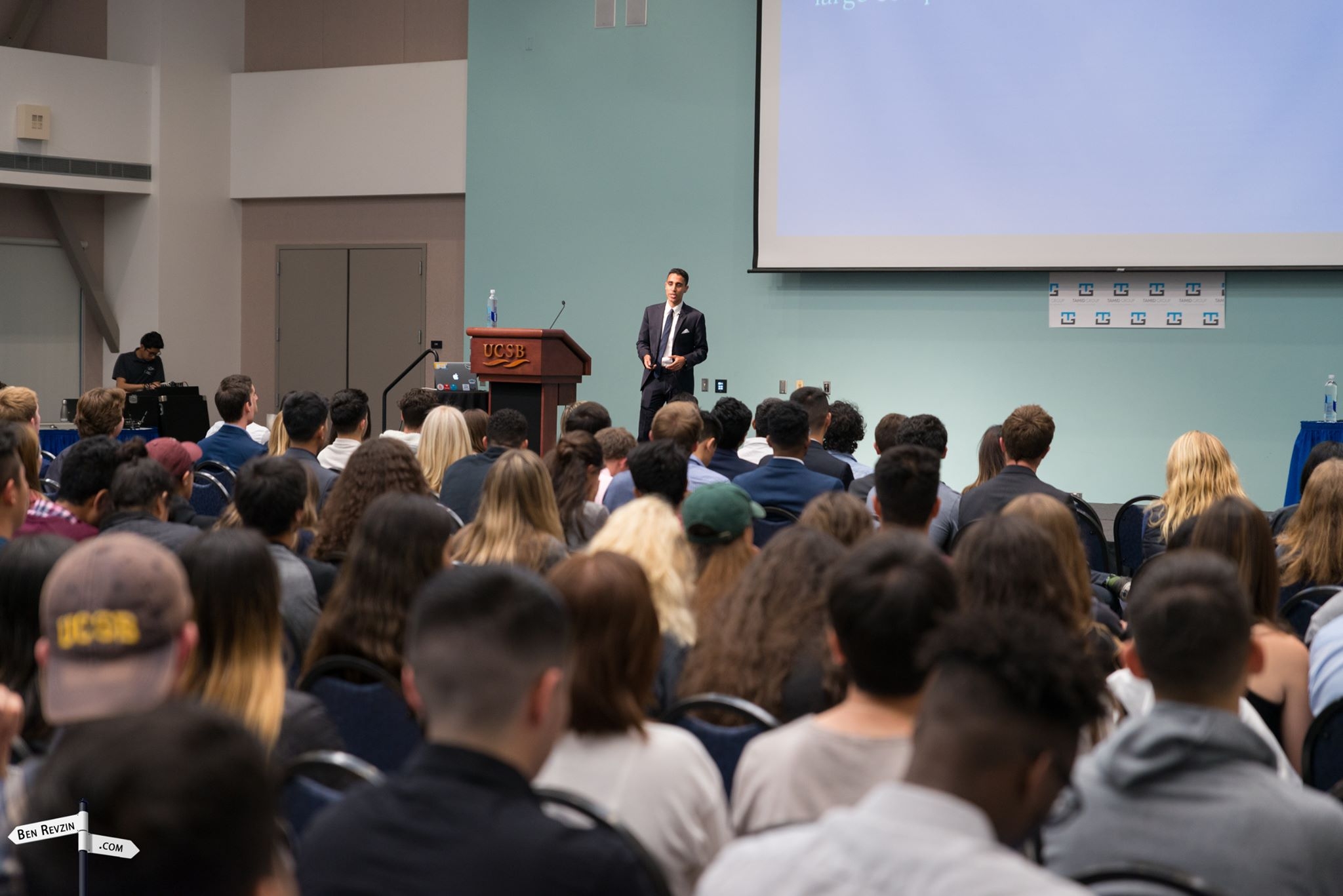 TAMID held its inaugural TAMID Tank event at UCSB on May 9. Courtesy of Mordi Shadpour

TAMID held their first TAMID Tank May 9 in the Corwin Pavilion, which had a similar format to that of the ABC television show, “Shark Tank.” The developers of the startups presented their projects in front of three judges, who were all experienced venture capitalists.

The first TAMID Tank was held three years ago at Queens College in New York City by several TAMID chapters, according to Mordi Shadpour, a second-year philosophy and linguistics double major and president of the UCSB chapter of TAMID.

Other TAMID chapters have since gone on to host TAMID Tanks as well, such as the chapters in USC and the University of Miami.

“This kind of event gives students a chance to pitch in front of all of their friends and get access to actual investors, which is hard for students like us to get,” Shadpour said. “It also inspires other students to go out there and make something out of their own ideas.”

Shadpour, along with other members of the UCSB TAMID chapter, began working on the logistics and funding of putting on TAMID Tank at UCSB during Fall Quarter 2017.

They also began spreading word of the application process through several ways, such as informing the UCSB professional fraternities, associations and societies on campus, making pitches in Technology Management Program classes, sending out emails to various departments and paying for Facebook ads.

From the initial 40 applications that TAMID received, about five to 10 were dropped early in the process due to them being either non serious or incomplete, according to Shadpour. The remaining applications were then scrutinized, with interviews of the applicants being conducted throughout winter and spring quarters.

“We then passed all that info to the CEOs and co-founders of this company called Social Native. My brother is one of the CEOs and his partner was a judge at the USC chapter’s TAMID Tank, so we felt they could help us with this and they went ahead and chose the three for us. Obviously no names of the applicants were involved to bias the process,” Shadpour said.

The three finalists included Garpie, an on-foot navigation service that allows users to easily and privately locate and meet with up with their friends in real time; Nectir, an education app that better facilitates classroom participation and study groups; and Crypto For Charity, a service that allows for direct donations of digital currencies to charities.

At the end of the event, the three judges chose Garpie as the winner of the competition.

“When we won, it kind of showed that it wasn’t just us thinking that this was a good idea, but also that the public really does like it as well,” said Isaac Golberg, a third-year financial mathematics and statistics major and the vice president of strategic development of Garpie. 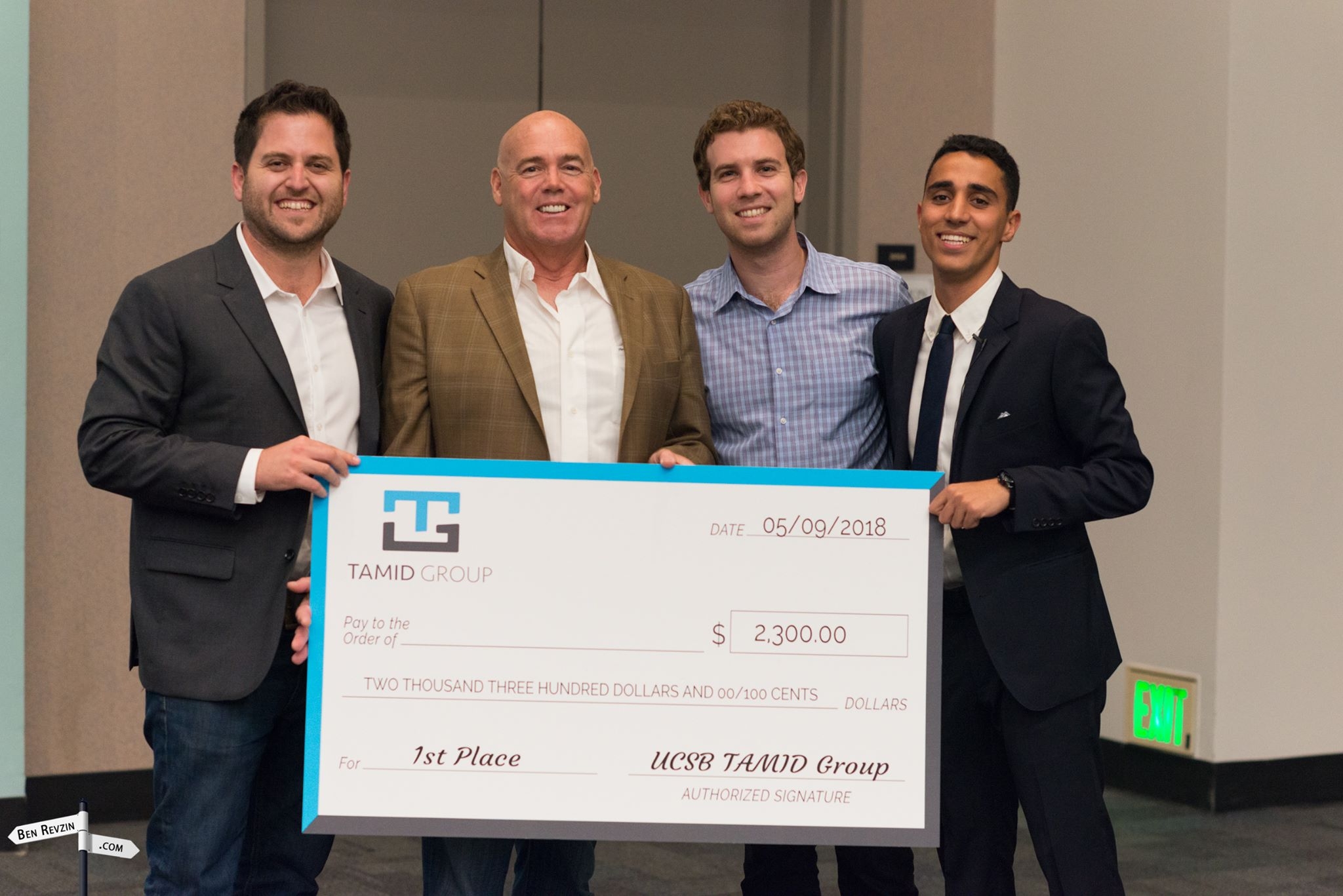 The three judges chose Garpie as the winner of the competition. Courtesy of Mordi Shadpour

Golberg said that the win meant a lot to him, as he and the team behind the project put their “blood, sweat, and tears” into Garpie and have “become really one with the product.”

“The feedback I got from after the event from people was just incredible. Having people come up to me and say things like, ‘This is exactly what I need,’ and, ‘I need this now,’ was incredible to hear,” Golberg said.

Golberg said what he believed sold the judges on Garpie was the increased accuracy of the geolocation services that the application has, which allows users to precisely locate their friends even in large crowds or huge spaces.

“Garpie is significantly more accurate than anything on the market right now,” Golberg said. “When you’re using Google Maps or any other big navigation service, they can have up to a 50-foot discrepancy. When it comes to Garpie, it has about a two-to-five-foot accuracy.”

Golberg said this increased accuracy also allows for the usage of an augmented reality feature within the app.

“With Garpie, the augmented reality comes into play with the camera view,” Golberg said. “When you see your friend on a map and you try to go to them, once you start getting close to their location, you can turn on your camera view, as if you were taking a picture, and a virtual marker is displayed above the person’s head. This virtual marker can be an emoji or any virtual content that you want.”

“If you’re in a crowded space like a music festival, that 50 foot discrepancy I mentioned earlier in other services doesn’t help you locate your friend with the virtual marker at all. You need that marker right above your friend’s head,” he explained.

Golberg plans on using the $2,300 cash prize money on travel expenses incurred when meeting with investors in order to raise the seed money needed to get Garpie out into the market by the end of the summer.

“We’ve been able to accomplish something that nobody else has been able to do,” Golberg said. “The fact is that these major companies, like Apple, Google and Snapchat, would love to optimize their geolocation services … and they have the vast resources to do it, but they haven’t been able to figure out how to do it. So the fact that we have been able to get around this obstacle shows the appeal behind the product.”

Golberg said that the app is currently in alpha testing while further refinements are made to Garpie, but said that beta testing will soon commence.

“There will definitely be people on campus testing it,” Golberg said. “After [the beta] cycle we’ll move into our full launch.”

Shadpour was pleased with the initial response and ultimate turnout to the event. He said several professional groups he approached were enthusiastic about TAMID and sent many of their members to the event.

“I thought there would be about 330 people who would come, so we only put 330 seats out … There were a lot of people standing in the back. It looked like ultimately there was about 400 people who came throughout the night,” Shadpour said.

Shadpour said that the event went “amazing” and the highlight of the night for him was just seeing all the people in the back “supporting the students and coming to check out TAMID.”

The judges at this event were super chill and the host helped the audience engage with the judges. I wish the keynote speaker, Jody had a bigger role though :(

Will definitely go again next year

Tbh I only came to this event because my friend In TAMID brought me along- I ended up really liking it and will apply to TAMD in the Fall. Thank you to the host, speaker and judges for doing such an amazing job