The Daily Nexus
Sports
Gauchos Head to SLO for Match Against Blue-Green Rival Cal Poly
May 17, 2018 at 12:52 pm by Jorge Mercado 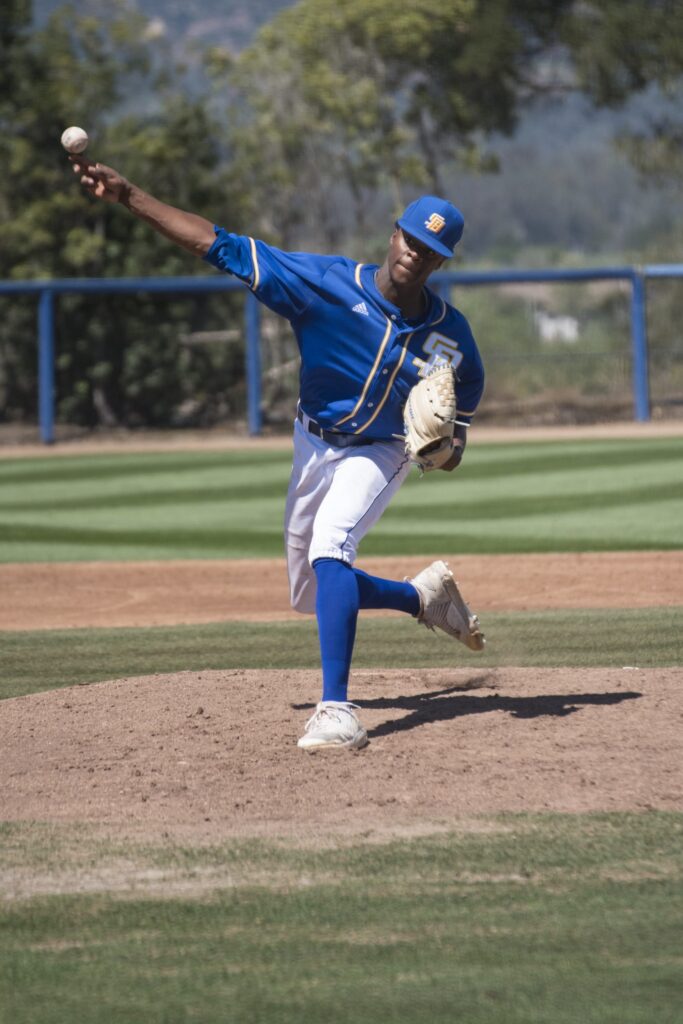 After dropping two of three at Long Beach last weekend, the UCSB baseball team was eliminated from postseason contention and will miss the NCAA Regional for the second-straight season.

Despite that, Santa Barbara still has a lot to play for, including a chance to beat Blue-Green Rival Cal Poly for the first time since the 2015 season.

“I told the guys this is our postseason,” Head Coach Andrew Checketts said. “The rest of our season is our postseason and we should treat it as such. We want to have some upward momentum going into the end of the season and give our guys that aren’t returning a good taste in our mouths.”

The Mustangs have swept the Gauchos the past two seasons and will look to do so again this season as they currently own a 24-27 overall record, 9-9 conference mark.

In the standings, they are five games behind first-place CSUF with six games to go.

UCSB will travel to SLO boasting a 24-24-1 overall record and a 8-10 Big West mark. Santa Barbara is coming off a 6-5 walk-off victory against Cal State Bakersfield this past Tuesday.

“The effort has been better the last few games even in some of those losses to Long Beach last weekend. The guys grinded out a good win on Tuesday and we will go as far as our pitching takes us,” Checketts said.

Along with playing its conference rival, the Gauchos are still in a very good position to finish the season strong, as with seven games to go, they can make it appoint to finish above .500, something they did not do last season, and improve upon its current seventh-place standing in the conference.

Historically, UCSB has played well against Cal Poly as it currently owns a 93-73-1 record against its rivals, however, in the Andrew Checketts era, Santa Barbara has gone just 7-15 and has lost six straight to date.

“We have not played well against them the last few times and traditionally their place is a tough place to play at but we have to show up and execute it does not matter who is on the other side of the dugout, we want to play our best baseball,” Checketts said. “We compete against each other in all facets of the game including recruiting so we do have that healthy rivalry and we want to win.”

In order to not only just take one game from the Mustangs this weekend, but hopefully the whole series, the Gauchos will need excellent pitching performances from each of their starters and even their bullpen guys.

In a 12-0 loss against LBSU on Saturday, starter right-handed pitcher Chris Lincoln was rocked as he allowed six hits and seven runs in just 2.2 innings pitched. To be fair to the sophomore, he was coming off a nagging back injury he sustained the week before.

This week, Lincoln will look to get back to form as his match against LBSU was definitely not the norm coaches and fans have come to expect from him.

“He couldn’t land his off-speed pitches for strikes and he was fat in the middle of the plate when he was behind the count so that’s a recipe for a bad start,” Checketts said. “He hasn’t had a stinker before that so I am looking forward to seeing him bounce back and respond.”

UCSB will also need more meaningful contributions from the bullpen guys as junior Kevin Chandler has a 5.54 ERA in 15 appearances, freshman Chris Troye has a 4.82 ERA in 16 appearances and junior Alex Patterson has a 3.82 ERA in 21 appearances.

In a Friday start, senior Stevie Ledesma had a solid outing and handed the bullpen an 8-4 lead but the Gauchos were unable to hold on losing the game 9-8. Games like this are what drives fans and the team crazy.

This weekend in particular, the Gaucho pitching staff will have their work cut out for them as they are going up against a Cal Poly team that currently owns the best batting average (.273), slugging percentage (.375) and second-best on-base percentage (.408) in the Big West.

Along with owning the conference’s best batting average, the Mustangs also have two of the top-five best hitters in the conference.

Outfielder Alex McKenna owns a .347 batting average which is the second-best in the Big West to go along with 30 RBI’s.

Catcher Nick Meyer has the fourth best batting average in the conference with a .333 percentage. Infielder Tate Samuelson has the most runs batted in with 37.

For UCSB, this weekend is all about continuing the uphill trend.

With an even overall record and much room for improvement, this team still has a lot to play for and while this season will not result in the National Championship, it could be what the team looks back on a year from now as to what made a dream run in the NCAA Tournament possible.

“Going to Omaha is not always a one-year process, sometimes it is a three, four, five-year process if we want to get back there and we can’t wait until next fall because we want to go about everything the right way. We need to play with the mentality that we want to have next spring now,” Checketts said.

Santa Barbara will take on Cal Poly for game one of a three-game set at 6 p.m. on Friday, May 18 at Robin Baggett Stadium.