The Daily Nexus
Sports
Gauchos Cross Blue Line with Winningest Season in UCSB History
May 17, 2018 at 5:10 am by Max Kelton

A mere three years. Less than a third of a decade after the team was finally recommissioned and ready to compete, the UCSB Hockey team found itself sitting on the first championship victory in program history as a part of the Pacific Collegiate Hockey Association and proud winners of the ever coveted Adams Cup.

With such unprecedented success in a token couple of seasons, the question remains: How did this fresh legs Gaucho squad come up so successfully in the playoffs?

Many teams thrive on veteran leadership from experienced third- and fourth-year players to smooth out a transition for the younger guys. Yet with such an infamous history, or more applicably the lack thereof, this squad saw only eight returners in their championship year. A team made up of 60 percent new members is rarely considered a favorite to win a championship, but the fresh legs on UCSB are unique for a group of first-year competitors.

The freshman presence is significant, but these young men are no strangers to playoff and championship experience. The addition of freshman center Collin del Bonis was crucial to the Gauchos’ success this year.

Del Bonis thrived in crunch time during high school games as he, accompanied by long-time teammates forward Chris Ewasiuk, defensemen Emmett Rupert and goalie Will Hahn, led the Santa Barbara Royals to back-to-back high school championships in the Los Angeles Kings Hockey League in each of two seasons prior, paving a path for each of them to transition to UCSB hockey. Once the key pieces were initiated at the collegiate level, the team knew success was imminent.

Imminent, not immediate. It took a couple games for these first-year studs to get their ice legs back on track, but once the team got rolling, boy, did they look like a legitimate threat to make a run for the PCHA title.

“After the first two or three [games], I was ready to go,” del Bonis said when asked about how his preparation ritual had changed with the transition from high school hockey to collegiate level competition. “We had 12 new guys on the team including me… so we didn’t have any chemistry going into those first two games.”

Santa Barbara struggled through the opening two games as new roles were assumed and new rotations were learned. As if it weren’t enough that UCSB was ushering in the majority of a new squad, the Gauchos had a tall task in front of them in Santa Clara University. The Broncos were coming off the 2016 season as runners-up for the Adams Cup and they were on a mission for vengeance.
On back-to-back days in the latter half of October, UCSB dropped two losses to Santa Clara by scores of 6-2 and 3-1 to kick off the 2017 season.

However, rather than being demoralized, these young puck handlers quickly became comfortable in their new roles as chemistry gradually grew within the clubhouse over the next week.

With a couple games, a hiccup of adversity and a stern week of practice under the squad’s belt, the Gauchos fiercely bounced back with two commanding wins, the first coming with a 4-1 score against Cal Lutheran.

On Oct. 29, UCSB faced off against Stanford and displayed sheer dominance on the ice while scoring a remarkable 15 goals en route to a shutout of the Cardinals. It seemed fitting that this game took place only a couple of days before Halloween because the Gauchos were starting to look like frightening competitors.

Much of the success for the quick turnaround was accredited to impeccable leadership from an experienced coaching staff that has handled its fair share of adversity. 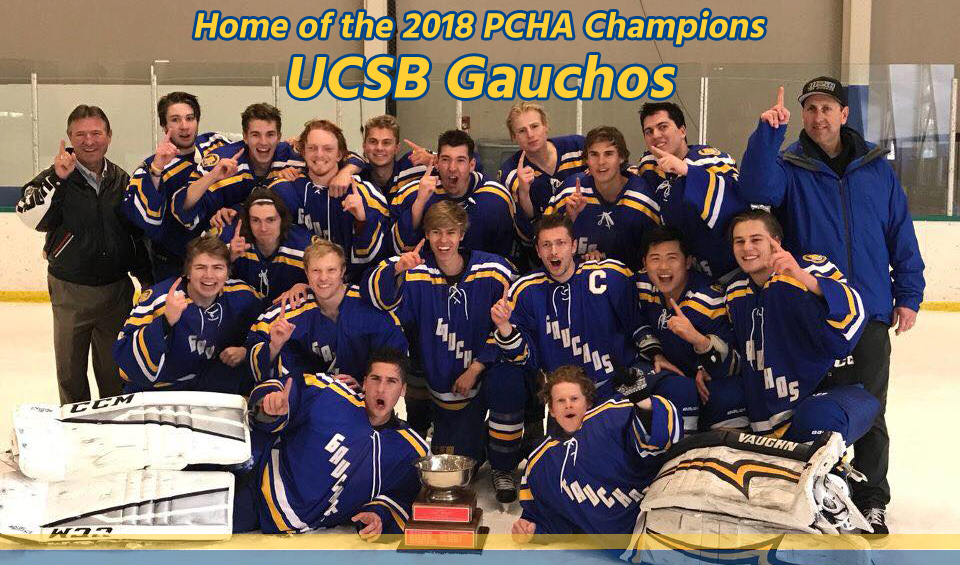 Former Boston Bruin and assistant coach Steve Heinze led the high school squad of Collin del Bonis and the rest of the Santa Barbara Royals to consecutive championships prior to taking a position with UCSB, so not only is he weathered in terms of hockey knowledge, but Coach Heinze also has a history with many of the first-year players which smoothed the transition in collegiate level competition.
“If we can just approach [games] with a mindset that we’re going to outwork them…you can teach X’s and O’s and pretty plays to anybody, but what I would like to instill with these guys is hard work wins games,” Henize said. When it comes down to crunch times and the postseason, Henize went on to preach rest and care for the body, saying, “we get in shape and then we go and outwork them.”
The staunch squad continued to ride their confidence high rolling into the final game of 2017 on a four-game win streak before resuming play once again in 2018 as the team shifted gears to conference play.

UCSB completed the season with seven wins and five losses, a step behind their success in the 2016-2017 season in which they finished 9-6 in UCSB’s first season as a part of the Division II Pacific Collegiate Hockey Association.
In contrast to last year, however, the Gauchos broke the seal with a playoff berth in just their second year in the division.
Over Presidents’ Day weekend, the Gauchos traveled to Lake Tahoe to compete for the Adams Cup and prove their dominance over the West. With a blowout win against Stanford and an outlasting performance against Cal Lutheran, the Ice ‘Chos found themselves matched up with none other than the Santa Clara Broncos, the very team that dropped UCSB in its first two games of the season.
But this was a very different Gaucho team than at the beginning of the season. A much more well-rounded and composed squad, the Gauchos have matured and developed immense chemistry throughout the course of the season.
Heading into the matchup against Santa Clara, the entire roster was feeling confident and poised as they looked the rival Broncos dead in the eye from point-blank range.

Third-year forward Jackson Schutz assumed a unique leadership role as one of the older players on the team though competing in his first season of hockey with UCSB.

“The skill has always been present on the team. We have the ability to beat Santa Clara,” Schutz said when questioned about the team’s legitimacy come postseason. He went on to praise his squad, saying, “our first two games of the season, we were just getting to know each other… now at the end of the season, we know each other’s styles of play so well.”

Through the first two periods in the Gauchos championship match up, the team looked to be in complete control as they built onto a 6-1 lead heading into the final period of the season. Yet a strong start didn’t quite get UCSB out of the woods as Santa Clara answered with an unprecedented five goals in the final period as the fate of each of their seasons was left to a mere shootout.

Leave it to none other than freshman standout Collin del Bonis to finesse the walk-off goal in the extra time to send the Gauchos into the offseason elated with the program’s first hockey championship in only three years of being established.

The Gauchos rode the isthmus of victory down the canal of the Adams cup and ultimately etched their names into the history books.
With such a young and talented team to compliment the tremendous coaching leadership, the future for the ‘Chos is looking as bright as ever.