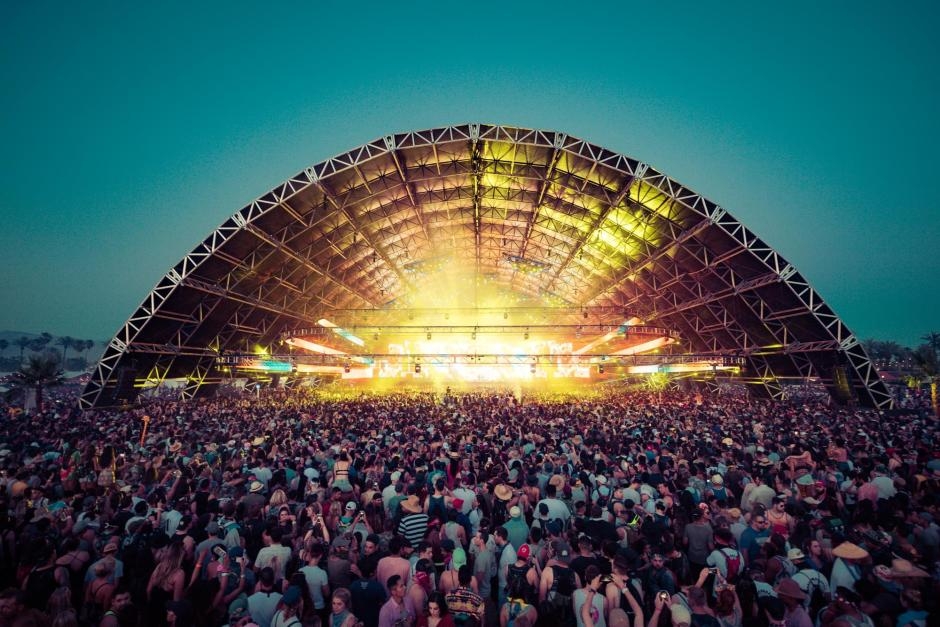 Coachella — even the mention of the name evokes glitter-clad images of belly chains and cultural appropriation. Had you talked to me just two short weeks ago, I would have said that the only word that comes to mind when I hear “Coachella” is “overrated.” But alas, having attended my first Coachella this April, my sentiments for the festival have taken a tentative 180.

Previously, I maintained that Coachella was for aspiring insta-models and white people who think they aren’t. Rather, I thought it was for the basic. Having attended other festivals with varying reputations like Lightning in a Bottle, FYF and Outside Lands, I concluded ignorantly that Coachella was for squares and that the people who make up the crowd are comparatively less vibey, mindful, woke or delightful than the refined and intellectual crowds that LiB, FYF and OSL attract. I was pleasantly mistaken.

Put simply, Coachella is the mack-daddy of all festivals. It does it big. The sheer production quality alone is reason enough to attend. What Coachella does that other festivals fail to is flush tons of funds into every single minute detail of the festival. They really do have a commitment to the festival attendees, and it shows. It’s not just a sham intent on exploiting a large gathering of affluent people. Everything caters to the pure enjoyment of the attendees and there’s something exquisite at every turn.

My first and primary concern prior to attendance was the demographic that Coachella attracts. Fellow festival goers can make or break a festival experience, and I wrongfully assumed that Coachella would attract a crowd that goes to festivals for all the wrong reasons. I expected that Coachella would be filled with pretentious, self-absorbed Instagram models seeking to bleed the festival grounds dry of every insta-worthy background. And while there are ample apparent models and ~influencers~ prancing about the festival grounds, there is also an equal counterweight. There are happy people who simply want to have fun and listen to dank music.

I was blissfully confronted with a sea of smiling faces and good-natured people equally as eager to see their favorite artists perform. People were not rude, I wasn’t pushed or battered, and I met wonderful humans at every stage. Coachella, you win this one. Rather than the pompous crowd I expected, I came across creative and fun-loving people who share the same interests as me. There’s no denying that the festival doubles as a quasi fashion show. Attendees don their gayest apparel and strut around in all of the glittery garb they own. But this is only one element to the festival. I learned to embrace the fashion as part of the Coachella experience and to appreciate the artfully crafted outfits that people put together.

The demographic was mainly 20-somethings, but I was also taken aback by the number of plausible moms and dads in attendance. Turns out even old people like cutting-edge performances from prodigious artists.

Furthermore, Coachella offers some of the better people-watching scenarios I’ve encountered in my 21 years. It trumps that of the Orange County Fair and the Paris metro combined. It’s such a physically beautiful crowd, too. It’s actually strange seeing so many attractive people in one place. I’m pretty sure all the objectively good-looking people on the planet were at Coachella Weekend one.

Another concern I had with Coachella prior to attending was the music itself. I feared that the hundreds of dollars I invested in my experience would be put to waste. At a glance, the lineup didn’t seriously excite me, and I feared I would be forced to watch performances from people who make up for in notoriety what they lack in talent. Yet again, I was proven wrong.

Within 10 minutes of my attendance at the festival, the internet-famous yodeling boy was on stage. I was both utterly shocked and not surprised at all.

Coachella has something for everyone. Unlike other festivals, it does not pinhole itself by branding itself as a genre-specific festival. The breadth of its annual lineups continue to become increasingly polar. They pair rock artists with racy hip-hop performers and put Vance Joy on the same stage as Cardi B. The only boundary that Coachella consistently enforces is that there will be A-list artists. Again, they do it big.

Tyler, the Creator has a very niche fanbase. His paramount talent does not transcend the fact that he’s not everybody’s cup of tea. He’s abrasive and unpredictable and I felt that Coachella was just not his vibe. Coachella encapsulates all of the things Tyler isn’t: white kids doing drugs they bought with their parents’ money and wearing clothing made by designers whose names they can’t pronounce. Instagram photo shoots, recording of performances, trying to outdo everyone around you on the most superficial level. His performance didn’t garner the attention it deserved and the lack of energy in the crowd was noticeable. A word of advice? Stick to Flog Gnaw, Tyler.

Odesza delivered wizardry to my eyeballs. The American electronic duo employed unprecedented tactics to amaze and entertain the audience, and it worked. Hundreds of drones filled the sky with light in what looked like a continuation of floating paper lanterns up from the screen. These drones continued to beam and shift until they formed the duo’s symbol in the sky. I personally found it was quite rude of the artists to place such an impressive distraction in the middle of their set. I couldn’t focus on the performance because I was in a continuous state of utter awe. Their set was beautiful and ethereal. It made me cry, made me smile, made me drop it like it was hot and made me bang on my own set of pretend drums. For a DJ duo with an image that is far from badass, they delivered in the area of badass-ness.

It’s so much more than a competition of who can compile the most rhinestone-clad articles of clothing in one ensemble.

This year’s Coachella lineup was particularly EDM-heavy. This could be reflective of a broader trend toward a favoring of the synthetic sound. The electro lineup included DJs ranging from king of night bass AC Slater to the celestial Odesza and featured most everything in between. I broke my neck at Troyboi’s trap-heavy set and womped in the Do Lab to my heart’s content.

The Do Lab is where I would like to live when I grow up. It’s the place where DJs are always firing and drunk girls somehow make their way on stage and shoot giant water blasters that they shouldn’t be legally permitted to operate. The Do Lab is where funk intersects groove, and it all happens under a billowy covering of magnificent colorful tarps. It’s always popping off, always there for you in your time of need.

Now, let’s talk headliners. The Weeknd headlined the first night of the festival. He performed banger after banger, and I appreciated that. He sang beautifully and exposed his talent in a nonchalant manner, opting for a more understated performance than his headlining counterparts. His performance was a great way to close the first day and kick off the festival.

Saturday, Beyoncé delivered a performance that was as earth-shattering as just about everything else she does. She served up what resembled more of a full-length concert than a festival performance. Throughout the entirety of the two hour performance all I could think about as I stared at her perfectly perky ass was that she popped three children out. Damn.

Her performance was filled with empowering nods to black culture and tasteful allusions to gender inequality. She elegantly and artfully made paramount social commentary all while strutting her shit and making it appear effortless in that true Beyoncé fashion. She closed her performance by humbly thanking the audience for allowing her to be the first black woman to headline Coachella, reminding us that she is somehow still a human.

For Coachella’s closing headliner, Eminem, I stood in the crowd by myself, barefoot, content, wiggling my toes in the grass and munching on a churro. But from Eminem, I wanted more. His performance got off to a peculiar start as red, white and blue fireworks shot into the sky and images of the American flag filled the jumbotrons. To these images he performed the song “White America,” and I found this to be a strange choice for the audience he was performing to. Out of all of his arsenal of hits to perform, and keeping in mind that headlining Coachella is one of the biggest performances of any artist’s career, I thought it a strange choice to include a song that mocks the very crowd of people he was performing to. From Eminem, I wanted more hits and less political commentary from a white dude.

Festivals aren’t solely about music, however. Coachella is also famous for its featured art and grandiose decor. This year the art did not disappoint. After two days of substance-clouded festival-ing I decided I was ready to experience Coachella in totality (or rather, sober). I actually had no choice as I had quickly reached my body’s breaking point.

My voice was nowhere to be found, the dirt underneath my fingernails became part of my ‘chella aesthetic and the blisters on my feet were so massive they deserved their own Instagram accounts. Not to mention my liver, brain, cardiovascular system and overall sense of reality were begging for sobriety.

I spent the remaining sober leg of my Coachella experience by myself, exploring the festival grounds, admiring the beautiful art and meeting fellow festival goers in passing. I stumbled upon a structure that I had passed a handful of times throughout the course of the weekend but never truly looked at. It was a striking, chrome, spaceship-looking piece titled “Lodestar” — and it was stunning. I walked around the structure for 45 minutes, admiring its form and delving into its intricacies. It was in that moment that it dawned on me: this is what Coachella is all about. Sure, it’s everything it appears to be at face value: the music, the clothes, the star-studded surprise performances and the cliche ferris wheel pictures. But it’s also this beautiful conglomeration of accidental and intentional hidden gems.

So, you can take this all with a grain of salt. Yes, all the surface assumptions about the festival do hold true. It is utilized as an excuse for people to show-off their finest festival attire and to potentially snap a selfie with a celeb. But Coachella is much more than the blog-o-sphere’s favorite festival. It is a gathering of artists, music and art lovers, fun seekers and colorful people who unite over a common love for the good stuff. It is overwhelmingly crowded, hot and loud, but it is also overwhelmingly merry, whimsical and spectacular.

The sheer grandeur of the festival is what makes it worthwhile and what keeps convincing 100,000+ people to attend every year.

Why are you body shaming Instagram models and assuming that they don’t share the same interests as you?