The Daily Nexus
Volleyball
Ready For More: DeWeese’s UCSB Journey Has Yet To Peak
May 2, 2018 at 12:00 am by Richard Benites 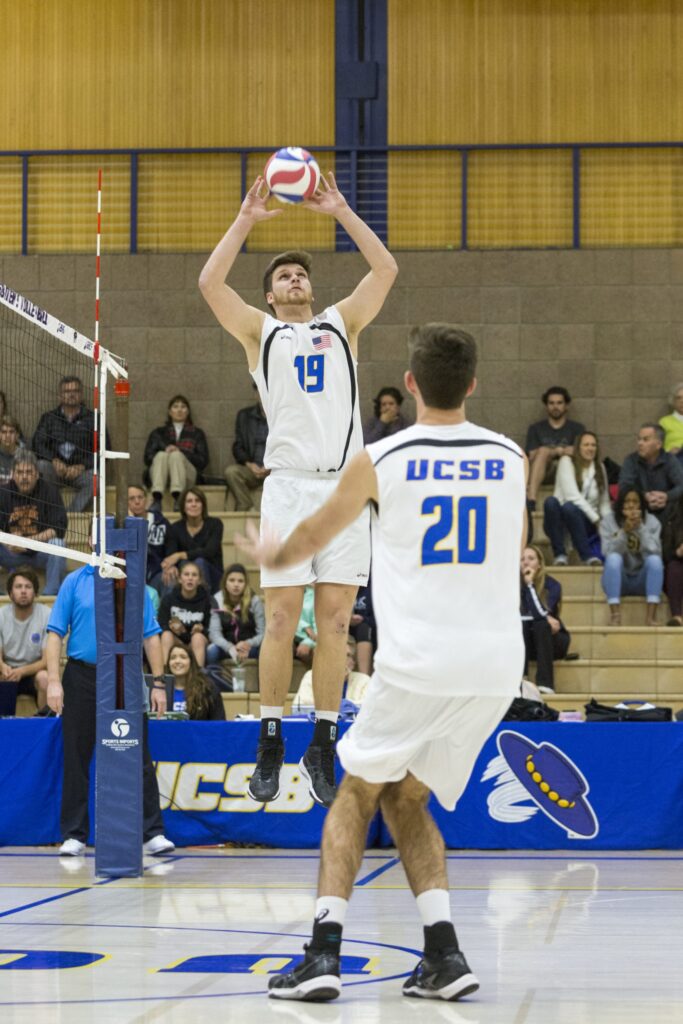 Randy DeWeese sets the ball to his outside hitter. Dustin Harris/Daily Nexus

From a family whose volleyball aspirations brought them to compete at the collegiate level comes the next generation to continue that legacy.

It took Randy DeWeese plenty of hard work and determination during his journey into the NCAA. Now a key part of the No. 12 team in the nation, DeWeese’s elite showings every game night are a testament to his skill as much as a prime example of why the Gauchos will be in good hands at the setter position for years to come.

DeWeese is only a sophomore here at UCSB, but with already-impressive stats of a team-high 637 assists and a 7.41 assists-per-set ratio, you might figure him for a seasoned vet at first. Those rankings were also the sixth-best mark in the Big West Conference.

As the starting setter for the Gauchos men’s volleyball team, he is a great role model of how every practice, gym session and game is just another opportunity to improve daily. Although his best volleyball moments are still sure to come, it’s equally fascinating to understand his journey of how he became one of the best setters in the nation for his age.

“My mom played at the U of A, my uncle at Stanford and the junior national team. So I knew I had it in me,” DeWeese said. “I just had to put in the work and grind it out. That way I was able to figure it all out before I got to college.”

Growing up in NorCal’s Sacramento area, volleyball had always played a big part in his life. When considering his family’s direct ties to the sport, he really wanted to continue in their footsteps and excel at the same elite level, and that’s exactly what he did.

Early on, DeWeese received much praise in his time playing club volleyball for Northern California Volleyball Club (NCVC). He earned various accolades for his performances all around the court, such as a spot on the U.S. Junior National Training Team and a feature in Volleyball Magazine’s “Fab 50.” Still, it became very clear that his strongest ability was that of his playmaking expertise at the setter position.

Soon enough, that tough process of going from club to college began and he started reaching out to some of the best programs in the nation. In the beginning, DeWeese was no stranger to rejection as out-of-state responses didn’t go as planned. Luckily, it was his home state of California who came to the rescue as some of the Big West’s head coaches started to take notice of his true playmaking potential.

“I started looking pretty early on, around my sophomore year, and that’s when I first found Santa Barbara,” DeWeese said. “I also visited UCI and UCLA, but I just didn’t feel it…UCSB was just so perfect.”

Just like most other collegiate athletes, this transition to the next level took a toll on DeWeese. Whether it was intense practice sessions or putting in that extra hour in the gym, DeWeese points out that each day is a positional battle for all members of the team.

“Playing for Santa Barbara was really eye-opening; it showed me just how hard I had to work,” DeWeese said. “Even if the talent is there, you really have to apply yourself, you have to try harder every day. That way you get to where you want to be and achieve whatever you want.”

DeWeese also points out that everyone on the roster wants to start and that even some of his closest friends are the teammates whom he competes against. Nevertheless, coaches will only start those who are willing to put in the time and effort to deserve that starting position.

Following an earlier than expected exit from this recent postseason, the Gauchos finished the year with an 11-13 overall record and in fifth place in the Big West Conference standings.

Despite that, fans must also realize that No. 12 UCSB was No. 15 in NCAA rankings earlier in the year, showing that they did improve throughout the year.

Also, the Big West is perhaps the most competitive league since there are a total of four top-10 programs who also participate. Therefore, this was much more than a growing season, it was a preview of just how great UCSB can become over these next few years.

Earlier this season, Santa Barbara claimed upset wins against No. 3 UC Irvine, No. 6 BYU, No. 8 CSUN and No. 10 Ball State.

“Considering we were one of the younger teams in the league, this season went fairly successful. We took a few games against some highly ranked opponents and that caught a lot of people off guard. Just showing what we were capable of was a huge step for us, and we’re going to be that same kind of team next year,” DeWeese said. “I think we’re not far behind at all … We are young, but a big goal for us would be breaking into the top 10 and maintaining that throughout the year.”

Considering only a quarter of the total team is upperclassmen, UCSB certainly will look to improve their play. Of those four upperclassmen, only one is a senior. Therefore, practically the same familiar squad will be lining up for the Gauchos next year, and UCSB’s star setter has high hopes for the next step of expected progression during this offseason.

“The way our returning group is progressing has been really fast and we’re learning how to truly play together,” DeWeese said. “And other teams will have to change their dynamic to fit with new players, whereas our starting lineup looks to stay the same next year. So it’s nice knowing that we’ll have that chemistry advantage in next season’s league.”

As true with any team of any sport, a change in both players and personnel can make or break a team. Luckily for UCSB, this returning group of now experienced players will be able to function together at a higher level.

However, the fact still remains that the Gauchos compete in the Big West, one of the most competitive volleyball conferences in the entire nation.  Including UCSB, five of the total six league teams in the Big West have been ranked all year long within the top-15 programs in NCAA poll rankings.

“I think a good goal for us would be staying in the top 10 and maintaining it through the whole year,” said DeWeese when asked about his expectations for the team next season. “When it comes to conference play, taking a third seed or better would be ideal…then winning in the first round of the Big West tournament.”

Upon first thought, DeWeese’s goal seems very challenging. However, considering UCSB has beaten half of the 12 different teams they played in the top 15 this season, it seems like a very possible feat. With added context, No. 12 UCSB was not ranked within the top 15 at all in the beginning of the year; however, at one point this season they went as high as the 11th-best program in the nation.

All in all, DeWeese will continue to play a huge part in the game plans of UCSB men’s volleyball, and he only earned his role because of all the years he spent developing his craft. In essentially any competitive scenario, a team is only as good as its leader. In volleyball, players look to their setter for both playmaking production and quality control.

Santa Barbara’s program is lucky to have a positional leader like DeWeese, and he proves that every game night when he leaves it all out on the court.