When Brooke Rothfield learned about the human rights abuses occurring in Bangladesh sweatshops, she felt compelled to help combat the effects of fast fashion.

The Isla Vista Trading Post operates primarily on word of mouth. Aside from an occasional post on social media and tabling in the Arbor, the majority of the people donating clothes are those who have personally reaped the benefits of the trading post. 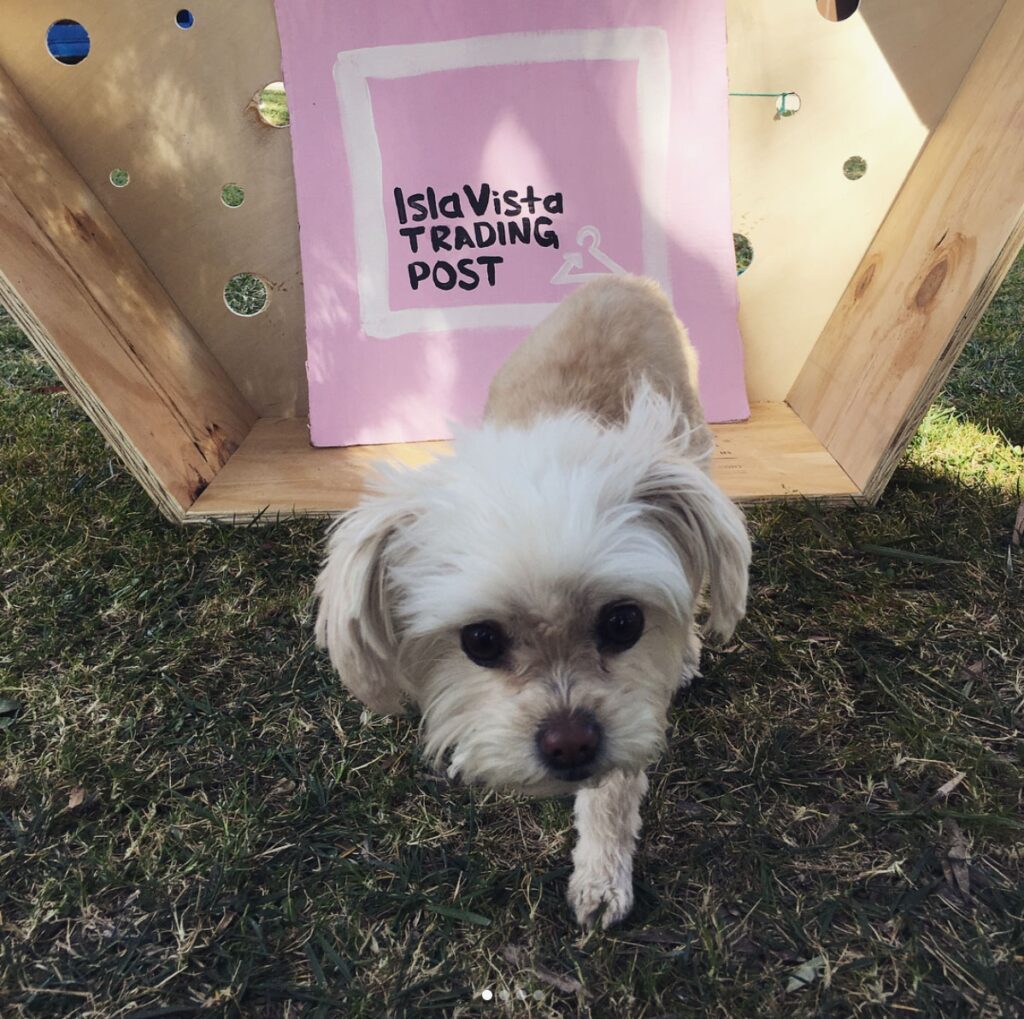 To reach a larger scope of the surrounding community, the trading post decided to host its pop-up shop in Isla Vista rather than on campus. After their first thrifting event with EAB, they participated in the Isla Vista Open Market, a flea market that hosts events at Little Acorn Park. Courtesy of Isla Vista Trading Post

Patrons of the trading post can take three pieces of clothing from the pop-up shops, free of charge.

The founders see no reason to make a profit off of their passion for thrifting, instead hoping that their “three for free” rule will encourage people to pay their efforts forward and choose to donate their old clothes at a future event if they wish.

Rothfield, a fourth-year communication major, initially pitched the idea for the trading post as a project for one of her communication classes in the fall.

“Our project was to come up with something that would help the community, so I pitched this idea for something sustainable and fashion-oriented,” she said.

Rothfield was inspired by the “free box” in Isla Vista, which are bins full of free clothing outside the Isla Vista Recreation & Park District building.

The founders of the trading post planned their first pop-up thrift shop during Fall Quarter, but when the Thomas Fire hit Santa Barbara County, plans for the event were abandoned.

The delay, as well as Rothfield’s graduation from UC Santa Barbara, left the future of the trading post up in the air.

Meanwhile, Sofia Willis, who now runs IVTP with Forsell, wanted to bring thrifting to Isla Vista, but lacked the means.

Willis, a second-year philosophy and sociology double major, initially got involved in thrifting through the Environmental Affairs Board (EAB), taking to the Free & For Sale Facebook page to round up clothing donations.

Through Facebook she met Rothfield and Forsell, whose vision for the Isla Vista Trading Post matched her own and the three branched off to reinvigorate the project.

“I wanted this to be not just about the environment, but also community, and fashion and self-expression, which is the direction [the project] was going in as well,” Willis said.

To reach a larger scope of the surrounding community, the trading post decided to host its pop-up shop in Isla Vista rather than on campus. After their first thrifting event with EAB, they participated in the Isla Vista Open Market, a flea market that hosts events at Little Acorn Park.

With shops hosted by student artists and vintage clothing curators, Rothfield thought the trading post would be a natural addition to the market.

Forsell and Willis agree that they want to educate people about the human rights violations in the fast fashion industry and cited sustainability as the primary goal of the trading post.

“We like to say that the fast fashion industry is the second dirtiest industry in the world,” Forsell said.

They said, however, that their mission does not have a political agenda.

The organization is comprised of approximately 15 dedicated students, five of whom hold official administrative positions. The volunteers meet on Wednesday nights to plan thrifting events, collect donations and postulate about the future of the rapidly-growing trading post.

Ultimately one of the main goals of the Isla Vista Trading Post is to normalize thrift shopping and to welcome all people who are interested. Willis believes that thrift shopping currently belongs to a very specific group of people, which she hopes to destigmatize.

“Right now it seems like thrifting belongs to a very niche group, sort of, and it’s not like everybody thrifts because it’s fashionable or cool, it’s kind of just a niche group that does it,” Forsell explained.

Willis and Forsell said the next major step is to apply for nonprofit status in order to receive funding from the Internal Revenue Service (IRS).

They are hopeful that with this funding they will be able to buy a storage unit, as they have currently been storing the enormous amounts of leftover clothes in their cars.

While the trading post is a nonprofit organization, Willis, Forsell, Rothfield and the other members of their team have all paid out of pocket to get the organization off the ground. Willis said she sees the organization as an “investment” and hopes of one day buying a van and a storage unit.

They also hope to plan a raffle for some of the high value items they have received as donations and would like to host an art show in conjunction with student artists and local businesses.

In the short term, Willis and Forsell are looking forward to collaborating with WORD Magazine, Surfrider Foundation and the sustainability chairs of Greek life organizations as part of the Greeks Go Green initiative in order to bring the trading post to as many places as they can.

“We’d like to expand past Isla Vista and inspire other college campuses and communities,” Forsell said. “And if this generation can get used to trading clothes, then future generations will start doing that.”

“‘Remember when people used to buy clothes instead of trading them?’ That’s my dream, to be able to say that to my kids,” Willis said.

A version of this article appeared on p. 4 of the May 3 print edition of the Daily Nexus.