The UCSB men’s tennis team has had an outstanding season, winning 16 games, including its last eight, and sweeping its Big West opponents en route to the regular season conference title.

None of that will matter, however, if the Gauchos fail to win their next two games in the Big West conference tournament this weekend. 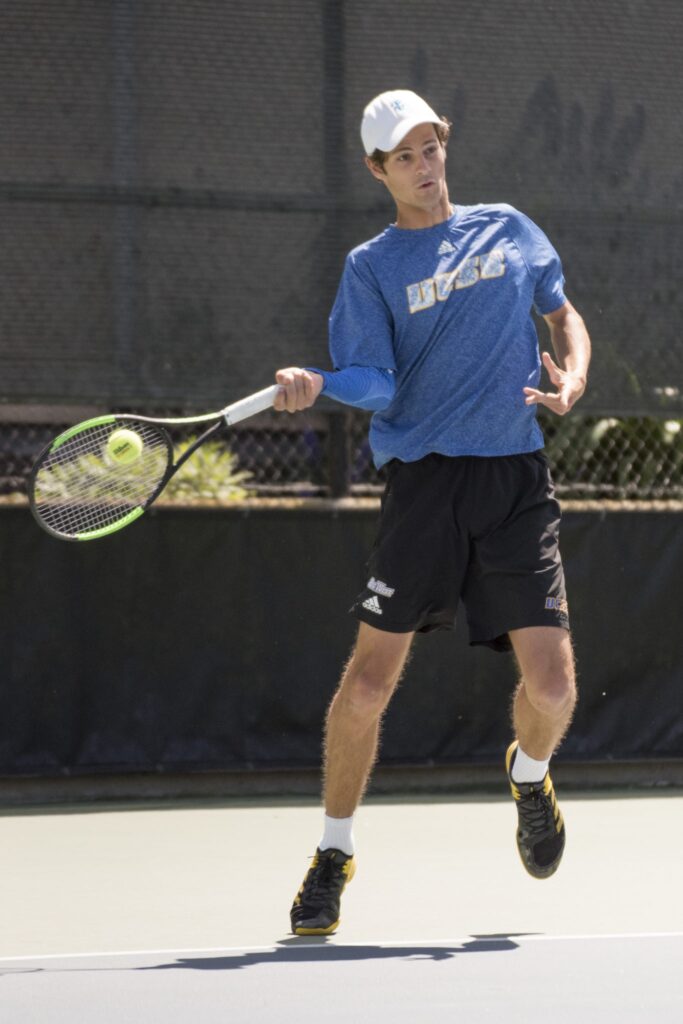 Set up from a nice serve. Siavash Ghadiri/Daily Nexus

Because they are outside of the top 50 in the college rankings — in large part due to early season slip-ups against difficult opponents — the Gauchos will need to win the conference tournament in order to get the automatic bid for the NCAA tournament.

By securing the first overall seed in the tournament after finishing 5-0 in conference play, Santa Barbara will have a bye until the semifinals on Friday. There, they will take on the winner of the UC Irvine-Hawaii match.

On paper, Irvine seems to be the more likely opponent for UCSB. Despite only going 2-3 in conference play, they finished the season 15-11. In their matchup earlier this season, they defeated Hawaii 7-0.

While Santa Barbara had the advantage of playing at home, where they finished the season 11-0, they were still able to dominate the Anteaters 7-0.

If UCSB hopes to win the tournament, they will need those three to be on top of their game.
Guillin, a transfer from Florida, has been nothing short of spectacular in his first season as a Gaucho, earning a 19-2 dual match singles record. Freund has also been great, as he has won eight straight matches and earned a 15-5 mark in dual matches.

Moreno de Alboran, ranked No. 76 in the country, has tallied a very solid 27-10 overall record and a 14-5 mark in dual matches. Being the only Big West player that has been ranked nationally, Moreno de Alboran will likely be invited to participate in the NCAA Singles Championships next month so long as he does not lose his ranking, giving him extra incentive to continue playing well in this tournament.

Where Irvine gave the Gauchos some trouble, however, was at the lower courts, a place where Santa Barbara particularly struggled earlier in the season.

On courts four and six, the Anteaters took UCSB to three sets, proving that they at least have the skillset to hang tight with them on those courts. Irvine is a talented team, and without the advantage of playing at home, the Gauchos will need to be on their A-game, especially since they will have had a day off already.

If Hawaii beats Irvine, UCSB will be favored fairly heavily in that matchup. Despite only going 3-14 on the season, the Rainbow Warriors were able to eke out two conference victories, making them the fifth seed in the tournament.

While they once again had the advantage of playing in front of a home crowd, UCSB was in charge of their regular season matchup with Hawaii from start to finish. In fact, Santa Barbara did not drop a single set during the entire match.

If UCSB can advance to the championship game, they will most likely have a rematch with Cal Poly in what was a very top-heavy conference this year.

Just days ago, the Gauchos went into SLO and blanked the Mustangs 7-0 to take the regular season title.
That being said, Cal Poly is an incredibly talented team, having gone 17-6 on the season and 4-1 in the conference.

In their matchup, UCSB used the doubles point in order to nullify the home court advantage of Cal Poly. Led by the No. 85 duo in the country, Moreno de Alboran and junior Anders Holm, who eked out a win on court one 6-4, the Gauchos were then able to take that momentum into singles play, where they won every single match.

That being said, Cal Poly is 17-6 for a reason, and their top three players all had excellent seasons.
Junior Josh Ortlip finished 14-4 on the season, and gave Moreno de Alboran a run for his money on court one.

UCSB will have to keep up the way they’ve played during their current eight-game winning streak if they are to extend their season. This has the makings of a team that could be dangerous in the NCAA tournament. First, however, they must get there.

Santa Barbara will play their semifinal match on Friday at 3 p.m. at Indian Wells. If they win that match, they will then play in the championship game on Sunday at 9 a.m.