The Daily Nexus
Volleyball
No. 12/5th-Seeded Gauchos Eliminated From Big West Tournament
April 20, 2018 at 9:26 am by Richard Benites 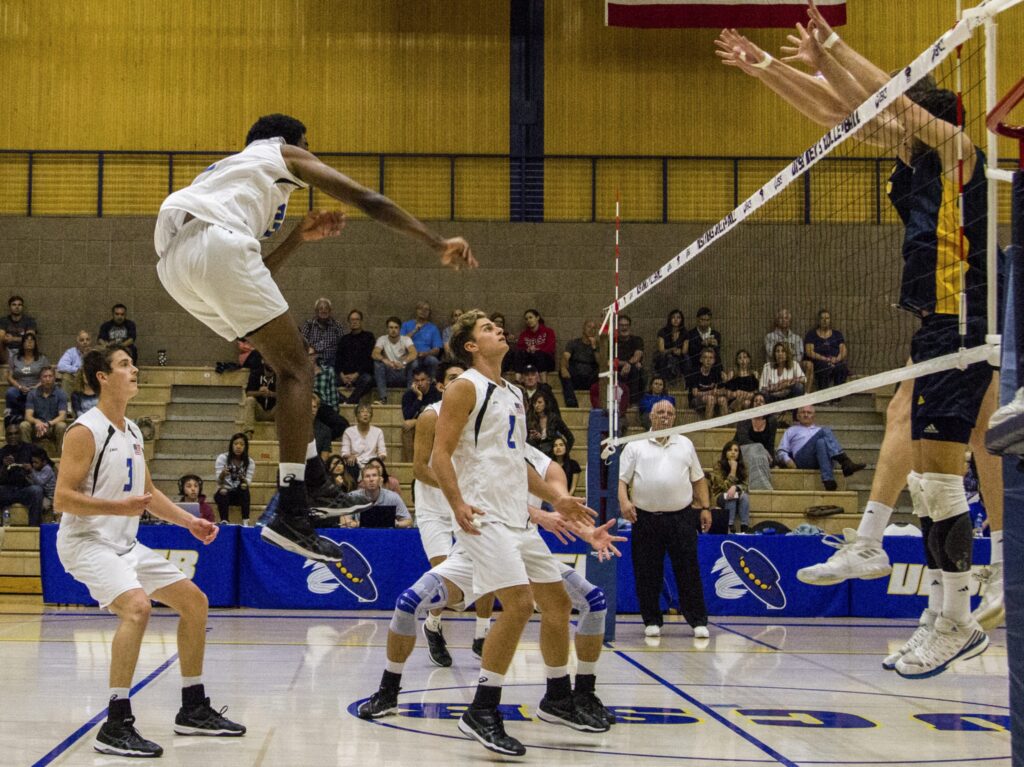 Spencer Fredrick gets a point for his team. Angie Banks / Daily Nexus

It was an exciting night for some postseason volleyball down at Long Beach State’s Walter Pyramid. The matchup, a fifth-seeded UCSB going up against fourth seed CSUN.

Considering the tournament’s single-elimination setup, this game would prove to be either the one to take the winning team to their next round opponent in No. 1 Long Beach State or be the last game of the season for the other side. Unfortunately, it didn’t go quite as planned for the Gauchos, as they dropped this matchup by a final result of 1-3.

The competition got underway fairly evenly at first, as the Gauchos and Matadors went back and forth, keeping it tied all the way up to 12-12 in the first set. Then a small CSUN advantage was quelled as Santa Barbara fought back to keep it within 2 at 16-18.

Ultimately, the Gauchos would get outscored drastically around this halfway mark, as the Matadors went on to close out the set on 7 scores; compared to UCSB’s 2 scores past this point, it would essentially set up the set 1 loss for the Gauchos at a result of 18-25.

UCSB then immediately picked up the pace and brought forward a strong performance for the closest set of the night. In the second, the Gauchos came out to a commanding lead as they opened 3-0 off an ace, error, and kill.

They would go on to maintain this 4 point advantage all the way to a 9-5 score. The lead would eventually falter, however, as a flurry of errors halfway through the set forced them to call a timeout. Soon after, the Matadors’ newfound momentum was enough to bring it back level at 14-14.

Things started to slow down at this point as both sides experienced lead changes and ties aplenty. Now into the late set numbers, both sides found themselves tied once more at 27-27.

It seemed like it was anyone’s game at this point and it seemed to favor the Gauchos as they went up by a point following a CSUN service error. In the end, UCSB couldn’t make the most of the situation as a pair of CSUN kills and an opposing attacking error gave the Matadors the hard fought 30-28 win in set 2.

Set 3 showed that the Gauchos came out to play with something to prove as they came out of the gates full speed in this one. Putting on perhaps one of their best sets of the entire season, UCSB started off with a comfortable 5-0 opening that soon turned into a 10-2 lead.

It would pretty much remain at this immense gap as the Matadors just seemed lost and out of rhythm for most of it. The third set would then clearly go to the Gauchos as the final tally was a wide result of 25-12.

With the momentum now in full swing, the Gauchos knew they’d take this set too if they replicated even half the level of play in the previous one.

However, the Matadors had recollected themselves and returned to their former quality as both sides always kept it within a couple throughout the entirety of set 4. A half hour of exciting and competitive play later and spectators were biting their nails at the sight of a 26-26 score nearing its finale.

Both sides played their hearts out and gifted volleyball fans a game to remember, yet the victor in this one was CSUN as a pair of back to back kills gave them the 28-26 win to close out the night.

Game leaders included Gaucho junior outside hitter Corey Chavers who led all attackers with a whopping 21 kills. UCSB’s junior middle blocker in Connor Drake also put up a match-leading of 8 great blocks on the night.

As this year’s men’s volleyball calendar now comes to a close, UCSB finishes with an 11-13 overall record on the year.